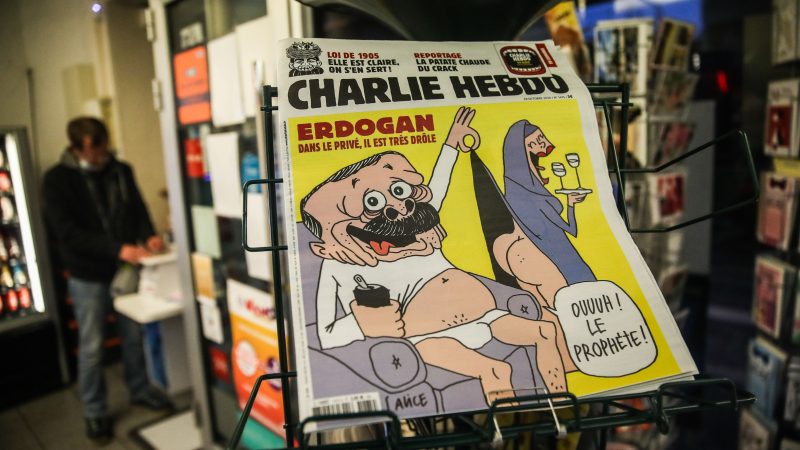 Copies of the new edition of the French satirical magazine Charlie Hebdo with a caricature of Turkish President Erdogan on its front page are on display at a newspaper kiosk in Paris, France, 28 October 2020. [Mohammed Badra/EPA/EFE]

Turkish President Recep Tayyip Erdoğan vented his outrage Wednesday (28 at a “disgusting” cartoon in the French satirical weekly Charlie Hebdo depicting him looking up a woman’s skirt while drinking beer in his underpants.

Under normal circumstances, France’s ambassador would have been summoned, but he has been recalled to Paris for consultations in a further sign of the deteriorating diplomatic relations between the two NATO allies.

The front cover Charlie Hebdo cartoon came out just days after Erdoğan called for a boycott of French products and questioned President Emmanuel Macron’s sanity for promoting a drive against Islamic extremism.

Macron’s defence of the media’s right to mock religion — as exemplified by Charlie Hebdo’s blasphemous cartoons of the Prophet Mohammed — has stirred angry protests across Turkey and swathes of the Muslim world. 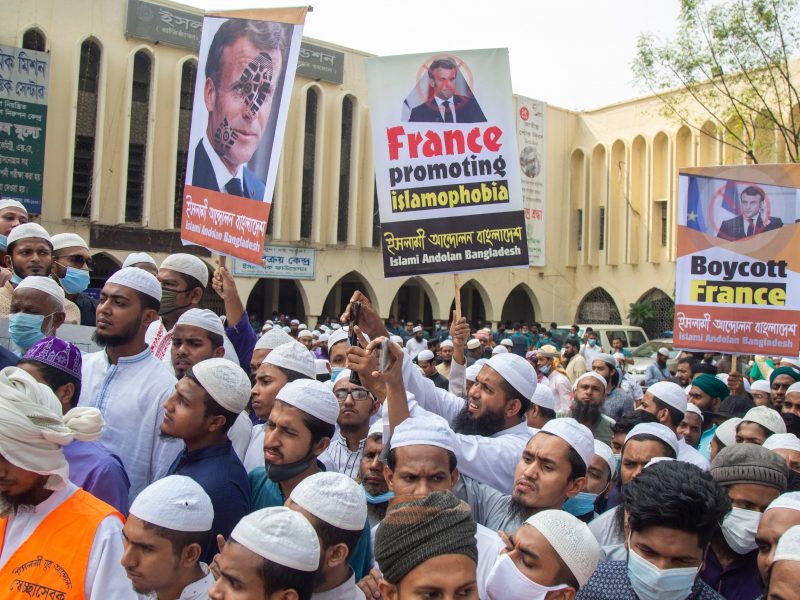 Iran’s supreme leader Ayatollah Ali Khamenei on Wednesday became the latest Islamic figure to criticise the French president, saying his defence of cartoons of the prophet was a “stupid act” and an “insult” to those who voted for him.

Erdoğan said he had not personally seen the Charlie Hebdo caricature because he did not want to “give credit to such immoral publications.”

“I don’t need to say anything to those scoundrels who insult my beloved prophet on such a scale,” Erdoğan said in a speech to his party’s lawmakers.

“I am sad and frustrated not because of this disgusting attack on me personally, but because of the impertinence taking aim at our prophet we love more than ourselves.”

Turkey is a mostly Muslim but officially secular country that has taken a more conservative and nationalist course under Erdoğan’s rule.

Macron’s defence of Charlie Hebdo’s right to publish drawings of the prophet, which is forbidden under Islam, came after the brutal murder on 16 October of a French school teacher who had shown cartoons to pupils during a class discussion about freedom of speech.

The magazine was also targeted by jihadists in a 2015 massacre that killed 12 people, including some of its most famous cartoonists.

Turkish officials accuse Macron of unfairly targeting Muslims and cultivating a culture that encourages Charlie Hebdo to use its right to offend.

Over the last week, protests and rallies have taken place in many Muslim-majority countries to denounce Macron.

In Syria, protesters burned pictures of Macron and French flags, while others rallied across the Indian city of Mumbai and parts of the Gaza Strip on Wednesday.

Meanwhile in Mali, a crowd of some 5,000 protesters gathered at Bamako’s grand mosque Wednesday, demanding that Macron apologise for defending the cartoons of the Prophet Mohammed.

“France and the French have gone too far, They have touched the untouchable, our prophet Mahomet. That is unforgivable,” said Mohamed Traore vice-president of Mali’s Islamic High Council.

Pakistan’s Prime Minister Imran Khan on Wednesday wrote to the leaders of Muslim countries calling on them to act together against Islamophobia, while a leading Kuwaiti supermarket chain said that most of its stores had stripped their shelves of French products.

But Macron has been staunchly defended by fellow European leaders and he drew support from India on Wednesday under Hindu nationalist Prime Minister Narendra Modi.

“We strongly deplore the personal attacks in unacceptable language on President Emmanuel Macron in violation of the most basic standards of international discourse,” said a statement from the Indian foreign ministry.

Denmark, where cartoons of the Prophet Mohammed that triggered a global backlash among Muslims were first published in 2005, said Wednesday it stood in solidarity with France over a new surge in outrage.

French government spokesman Gabriel Attal said his country “will never renounce its principles and values” in regard to media freedom and fight against Islamic extremism.

Erdoğan’s policies have put Turkey at growing odds with the European Union and Macron has become one of Turkish leader’s most vocal critics.

The two statesmen have sparred over the eastern Mediterranean as well as Turkey’s policies across the Middle East and — most recently — in the war between Azerbaijani and Armenian separatist forces in Nagorno-Karabakh.

France’s European Affairs Minister Clement Beaune said that Paris would “push for strong European responses, which include sanctions” over Erdoğan’s series of “provocations.”