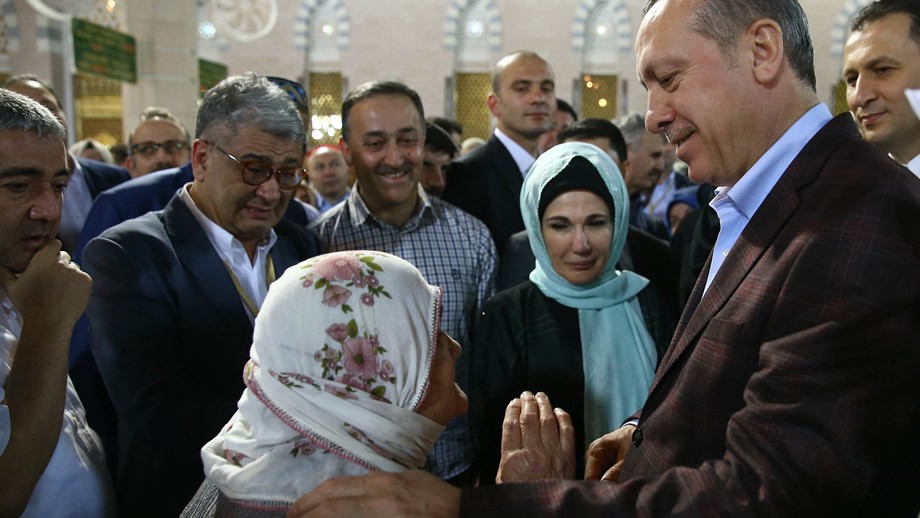 Erdoğan, with his wife Emine, meet the people. [President of Turkey]

Erdoğan’s comments to Reuters in an interview – his first since announcing a state of emergency late on Wednesday (20 July) – came as Turkey sought to reassure its citizens and the outside world that the government was not turning its back on democracy and returning to the harsh repression of past regimes.

Turkish President Recep Tayyip Erdoğan declared a state of emergency on Wednesday (20 July) as he widened a crackdown against thousands of members of the security forces, judiciary, civil service and academia after a failed military coup.

Erdoğan accuses Fethullah Gülen, a charismatic US-based cleric, of masterminding the plot against him, which crumbled early on Saturday (16 July). In a crackdown on his suspected followers, more than 60,000 soldiers, police, judges, civil servants and teachers have been suspended, detained or placed under investigation.

Turkish authorities have shut down media businesses seized last year from Koza Ipek Holding, a conglomerate linked to a US-based preacher accused of plotting against President Tayyip Erdoğan, according to an exchange filing.

Western countries are worried about instability and human rights in the country of 80 million, which plays an important part in the US-led fight against Islamic State and in the European Union’s efforts to stem the flow of refugees from Syria.

Erdoğan said the government’s Supreme Military Council, which is chaired by the prime minister, and includes the defence minister and the chief of staff, would oversee the restructuring of the armed forces.

“They are all working together as to what might be done, and … within a very short amount of time a new structure will be emerging. With this new structure, I believe the armed forces will get fresh blood,” Erdoğan said.

Speaking at his palace in Ankara, which was targeted during the coup attempt, Erdoğan stated that a new putsch was possible, but would not be easy, because authorities were now more vigilant.

“It is very clear that there were significant gaps and deficiencies in our intelligence, there is no point trying to hide it or deny it,” Erdoğan told Reuters.

Erdoğan also said there was no obstacle to extending the state of emergency beyond the initial three months – a comment likely to spark concern among critics already fearful about the pace of his crackdown. Emergency powers allow the government to take swift measures against supporters of the coup, in which more than 246 people were killed and over 2,000 wounded.

Emergency rule will also permit the president and cabinet to bypass parliament in enacting new laws and to limit or suspend rights and freedoms as they deem necessary.

Germany called for the measure to end as quickly as possible, while an international lawyers’ group warned Turkey against using it to subvert the rule of law and human rights, pointing to allegations of torture and ill-treatment of people held in the mass roundup.

“There is no excuse, there is no way in which the reaction can undermine fundamental freedoms and rights,” Mogherini said after remarks at the Carnegie Endowment for International Peace in Washington.

“What we’re seeing especially in the fields of universities, media, the judiciary, is unacceptable,” she said, apparently referring to detentions and dismissals of teachers and judges, bans on travel for academics and the detainment of journalists.

For some Turks, the state of emergency raised fears of a return to the days of martial law after a 1980 military coup, or the height of a Kurdish insurgency in the 1990s when much of the largely Kurdish southeast was under a state of emergency declared by the previous government.

Opposition parties which stood with the authorities against the coup expressed concern that the state of emergency could concentrate too much power in the hands of Erdoğan, whose rivals have long accused him of suppressing free speech.

Deputy Prime Minister Mehmet Simsek, who previously worked on Wall Street and is seen as one of the most investor-friendly politicians in the ruling AK Party, took to television, social media and news conferences in a bid to calm nervous financial markets and dispel comparisons with the past.

“The state of emergency in Turkey won’t include restrictions on movement, gatherings and free press etc. It isn’t martial law of 1990s,” he wrote on Twitter. “I’m confident Turkey will come out of this with much stronger democracy, better functioning market economy & enhanced investment climate.”

Markets were less confident. The lira currency was trading near a new record low on Thursday, while the main stock index tumbled 4.4%. The cost of insuring Turkish debt against default also surged.

But Erdoğan, who has raised the possibility of reinstating the death penalty in Turkey to punish coup leaders, suggested in his comments to Reuters that the emergency was also aimed at eradicating supporters of Gülen in Turkey.

Erdogan hopes to bring back the death penalty after coup attempt

Following Friday’s failed military coup (15 July), the Turkish government has been consolidating its grip on the country, particularly the army and the judiciary, and has even aired plans to reintroduce the death penalty. EURACTIV France reports.

Referring to the Gülen movement, as it is known, he called it “another separatist terrorist organisation”, drawing a parallel with Turkey’s fight against Kurdish militants over the past three decades.

Erdoğan, an Islamist, has led Turkey as prime minister or president since 2003.

“We will continue the fight … wherever they might be. These people have infiltrated the state organisation in this country and they rebelled against the state,” he said, calling the actions of Friday night “inhuman” and “immoral”.

Around a third of Turkey’s roughly 360 serving generals have been detained since the coup attempt, a senior official said, with 99 charged pending trial and 14 more being held.

The Defence Ministry is investigating all military judges and prosecutors, and has suspended 262 of them, broadcaster NTV reported, while 900 police officers in the capital, Ankara, were also suspended on Wednesday. The purge also extended to civil servants in the environment and sports ministries.

Erdoğan compared the movement to a malignant cancer in the body that could spread and return if not eliminated.

Ankara has said it will seek the extradition of Gülen, who has denounced the coup attempt and denied any involvement.

The state of emergency went into effect after parliament formally approved the measure on Thursday.