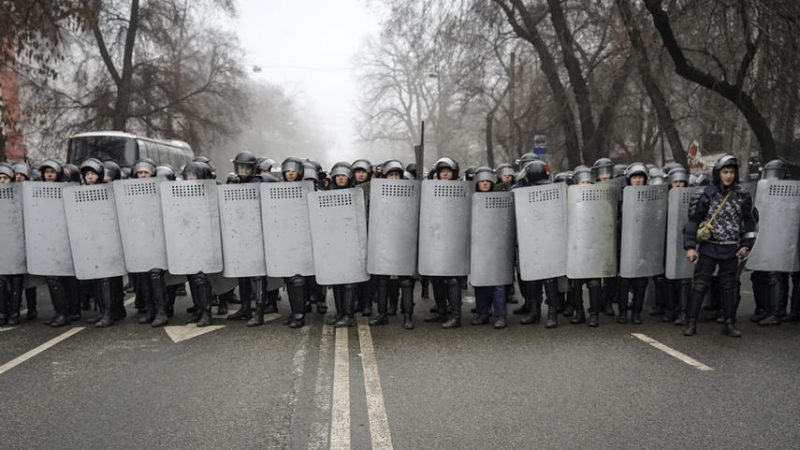 Riot police officers patrol in a street during rally over a hike in energy prices in Almaty, Kazakhstan, 05 January 2022. [EPA-EFE/STR]

Russia must respect the sovereignty of Kazakhstan, said the EU, reacting to the deployment of Russian military forces to quell an uprising after deadly violence spread across the former Soviet republic.

The uprising began as protests over a fuel price hike on New Year’s Day. The situation spiralled rapidly as protestors stormed and torched public buildings. Many casualties have been reported, both civilian and state security forces. On Thursday, Russia sent paratroopers into the country to restore order.

The military began shooting at protestors in Kazakhstan’s biggest city Almaty, Russian TASS agency reported. The military reportedly demanded on loudspeakers that the rioters leave the Republic Square and warned that they would start shooting.

Eyewitnesses report that the military are firing at the instigators of the riots and the cars.

According to Pashinyan, the forces have been sent “for a limited period to stabilise and normalise the situation in that country.”

An EU spokesperson said that Kazakhstan’s independence must be respected, adding that “the violence must be stopped. We are also calling for restraint from all parties and a peaceful resolution of the situation. Now obviously, the EU is ready and willing to support dialogue in the country,”

The situation is now reported to be calm in central Almaty, and the internet across the country has been restored following a government-ordered outage. At this point, the full extent of the unrest and the death count is difficult to ascertain.

In earlier, unsuccessful efforts to quell the protests, Tokayev reversed the fuel price rise and announced he was taking over a powerful security post Nazarbayev had retained after his surprise resignation in 2019.

The ongoing deadly protests in Kazakhstan risk igniting yet another geopolitical crisis, said a senior French official during a meeting with journalists. Paris has just begun its six months at the helm of the EU Council.

“What started as a social crisis risks becoming a political crisis,” the official told EURACTIV.

Without naming Russia, he added that the French Presidency is “calling on all sides, in Kazakhstan and elsewhere, for moderation.”