European Union foreign ministers insisted yesterday (13 November) they expected good relations with Donald Trump, after a crisis meeting that Britain, France and Hungary snubbed in a move that exposed rifts over the US president-elect.

The ministers said they wanted more details about Republican Trump’s plans following his shock election win, which has sparked anxiety in Europe due to his campaign-trail rhetoric questioning US commitment to the continent. 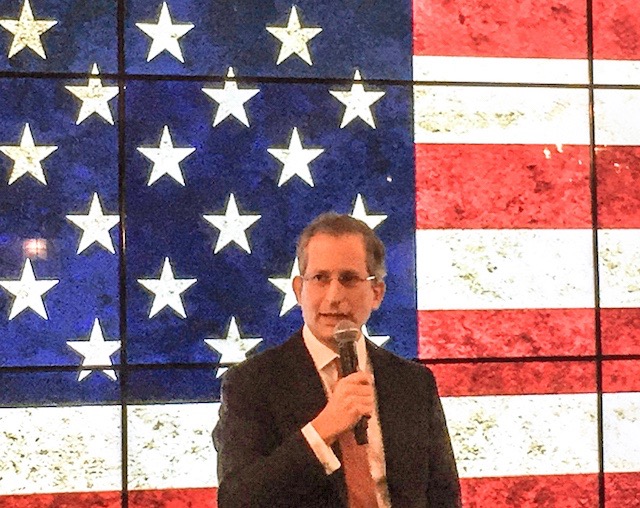 EU foreign policy chief Federica Mogherini called the special dinner on the eve of a scheduled meeting of the ministers, but some capitals criticsed the decision to have an emergency meeting on a democratic election result in a key ally.

“We are looking forward to a very strong partnership with the next administration, we’ve decided together to engage with the incoming administration even from this very first week of transition,” Mogherini told reporters afterwards.

“It’s not up to us… it’s up to the next US administration to define their own position,” she said following the two-and-a-half hour meeting.

“For the moment it’s not a wait and see attitude we can afford having, because the world goes on, Europe goes on, crisis goes on, but also opportunities we can take go on,” she said.

The European Union is becoming a “superpower” that is indispensable to world peace, the bloc’s foreign affairs chief said earlier today (10 November), as Europe continued to react to Donald Trump’s US election victory.

Mogherini also hit out at British Foreign Secretary Boris Johnson’s decision to sit out the meeting, linking it to Britain’s referendum vote in June to leave the 28-nation EU, which has left London needing US support for new trade deals.

“I guess it’s only normal for a country that has decided to leave not to be so interested in our discussion on the future of our relations,” she said.

Britain’s Foreign Office said Saturday, explaining Johnson’s absence, that “we do not see the need for an additional meeting on Sunday because the US election timetable is long established.

“An act of democracy has taken place, there is a transition period and we will work with the current and future administrations to ensure the best outcomes for Britain.”

Hungarian Foreign Minister Péter Szijjártó, another no-show, said on Friday that the meeting was “completely premature” and hit out at “frustrated and hysterical statements have been made in Europe” on the theme.

“Until we don’t know who will be in charge of the direction of US diplomacy, until the White House officially makes public its economic and foreign policy priorities, this is a complete waste of time, I don’t know what we have to talk about.”

Hungary’s PM Viktor Orbán has said that Trump’s election is “great news” and a proof that “democracy is still alive”.

In Paris, the French foreign ministry said Ayrault was unable to attend the dinner as he had a “very important meeting” early Monday with incoming UN chief Antonio Guterres.

The three were replaced at the dinner table by their respective EU ambassadors.

Slovakia which currently holds the rotating presidency of the Council of the EU took a pragmatic stance.

“We understand that there will be more American business-like approach and therefore there should also be more Europe from our side, but no one has ever questioned the outcome of the election or our readiness to work with the United States,” said Foreign Minister Miroslav Lajčák.

‘Going it alone not an option’

In an article in Britain’s Observer newspaper on Sunday, Stoltenberg warned: “This is no time to question the partnership between Europe and the United States. “Going it alone is not an option”, he added.

Trump’s apparent coolness on Europe has caused nervousness throughout a bloc grappling with a migration crisis, a stalled economy and a resurgent Russia on its eastern border.

But his win is also being seen by some in the EU as a chance to push ahead with projects of its own in a bid to build unity after the shock of Brexit.

On Monday the foreign ministers will discuss plans to boost defence cooperation – a move that Britain had long blocked – including a controversial proposal for a European military headquarters.

“Let’s stop talking about disarray (after the Trump victory). Isn’t this a chance for Europe to pull itself together?” Ayrault told the French radio station Europe 1.

Britain has traditionally led opposition to stronger European defence initiatives, arguing that these could weaken US commitment to NATO. Washington shoulders two-thirds of the 28-nation alliance’s military spending.

But commentators say Britain is now on particularly tricky ground as it plans to leave the EU yet also needs Trump’s backing for special trade status after Brexit.