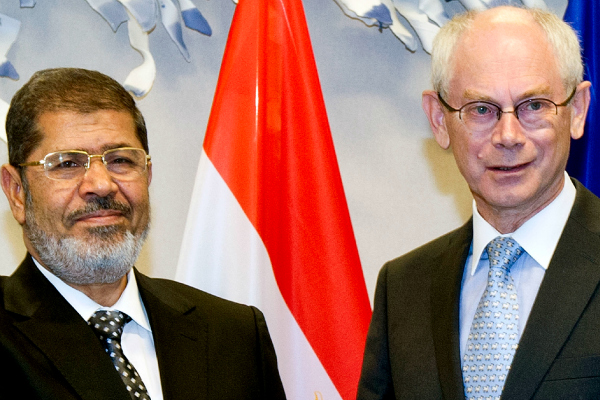 
Germany, France and the European Commission are leading donors of development and economic assistance to Egypt. There was no indication that either Brussels or Washington, which is a major supporter of the Egyptian military, was preparing to freeze aid to the country.

In Brussels, Vytautas Leškevi?ius, Lithuania’s vice minister of European Affairs, urged Egyptians “to avoid violence and to avoid the escalating tensions, and to engage in the search for a solution to the crisis through dialogue.”

“The biggest challenge and, indeed, the biggest risk for Egypt is the polarisation of its society and political system,” said Leškevi?ius, whose country holds the rotating presidency of the EU Council of Ministers.

Catherine Ashton, the EU’s foreign policy chief, on Wednesday called for the interim authorities to ensure “respect for fundamental rights, freedoms and the rule of law and will hold the authorities to account for this.”

Germany, France and the European Commission together provided €447 million in development and humanitarian aid to Egypt in 2011, the latest figures available from the Organisation for Economic Co-operation and Development.

After days of increasingly tumultuous protests in central Cairo, the Egyptian military intervened on Wednesday forcing Morsi from power 12 months after his inauguration as president.

In a throwback to the Arab Spring, when longtime president Hosni Mubarak handed power to the military after 18 days of demonstrations in February 2011, protestors erupted in cheers as word of Morsi’s ouster was announced by the army.

EU officials in recent days had expressed concern about potential clashes between demonstrators and Islamist supporters of Morsi’s party, the Muslim Brotherhood, whose members were often persecuted under previous governments.

US President Barack Obama said his administration was “reviewing” its relations with Cairo. The United States has traditionally had close relations with the Egyptian military and under the 1978 Camp David peace accords, has provided government forces with supplies, training and logistical support.

Mohamed Morsi made his first trip to Europe as the first democratically elected leader of Egypt in September 2012, less than three months after he took office. He sought to reassure the EU of his democratic credentials and win aid to help rebuild the country's troubled economy.

The EU responded by pledging economic aid of up to €700 million in a build to build ties with the Islamic president and his Muslim Brotherhood party.

Morsi was ousted by the Egyptian military on 3 July 2013.