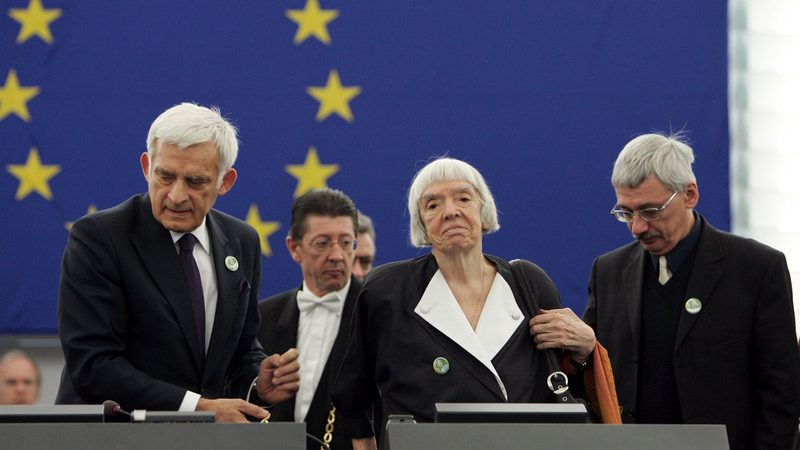 File photo. Then European Parliament President Jerzy Buzek (L) with Sakharov award winners Oleg Orlov (R) and Lyudmila Alexeyeva (C) during a ceremony at the European Parliament in Strasbourg, France on 16 December 2009. The Kremlin critics accepted the Sakharov prize on behalf of the human rights organization Memorial, a group that was originally founded to commemorate the victims of Stalinist oppression. The prize honors individuals or organizations for their efforts in fighting for fundamental freedom and against oppression and injustice. [EPA/EFE/MATHIEU CUGNOT]

Closing down respected Russian rights group Memorial would deal a “devastating blow” to civil society in the country, the secretary general of pan-European rights body the Council of Europe said Friday (12 November).

The closure of Memorial “would deal a further devastating blow to civil society, which is an essential pillar of any democracy,” said Marija Pejcinovic Buric, calling on Russian prosecutors to reconsider a move announced Thursday to close it down.

Memorial, Russia’s oldest rights group, said it was notified by Russia’s supreme court that prosecutors had filed a demand to dissolve the group over systematic violations of “foreign agent” legislation.

A term with Soviet-era undertones, the “foreign agent” status forces individuals or organisations to disclose sources of funding and label all their publications, including social media posts, with a tag or face fines.

Memorial, which has been regularly cited as a potential Nobel Peace Prize winner but never won, campaigns for the preservation of historical memory in Russia and against rights violations especially in the northern Caucasus region. In 2009, Oleg Orlov, Sergei Kovalev and Lyudmila Alexeyeva were awarded the European Parliament Sakharov Prize on behalf of Memorial.

Buric described the move by the Russian prosecutors as “very regrettable”.

She slammed the “foreign agent” status rule, saying “this law stigmatises NGOs, media and individuals and has had a repressive impact on civil society in Russia over recent years.”

The EU Commission also said that the news of closing down Memorial were “a source of alarm”.

“Memorial is an internationally renowned NGO, providing very important work for society in Russia. This is a deplorable decision and another example how the state authorities are shrinking the space for civil society, for the critical voices”, he said.

“In addition to targeting journalists and political activists, they are also trying to target NGOs, through the ‘foreign agent’ law, which we called on Russia to repel, because it contradicts international obligations by Russia. We are calling on Russian authorities to reverse this step”, Stano said.

Memorial on Thursday said there was “no legal basis” for the case, saying it had been accused of failing to identify itself publically as a designated foreign agent.

“This is a political decision aimed at destroying the Memorial Society, an organisation dedicated to the history of political repression and the protection of human rights.”

A hearing about the prosecutor’s case at is scheduled for 25 November, according to the court website.

“We’re in shock. On the other hand, this isn’t surprising … In recent years such wild things have been happening in Russia that this doesn’t really elicit amazement,” Oleg Orlov, a Memorial board member, told Reuters.

“This is obviously a political decision that has come down from somewhere above to liquidate us. And this is a blow to all of civil society and a really serious alarm bell for it.”

Focused in its early days on the crimes of the Stalinist era, Memorial has spoken out more recently against the repression of opposition figures, activists, journalists and others under Putin.

During the last years in Putin’s Russia, the glorification of Stalin has become official state policy.

In a post on its website two days ago, Memorial said it had documented a rise in the number of political prisoners in Russia to 420, up from 362 a year ago, but said the actual number was undoubtedly far higher.

As far back as 2015, Memorial was placed on an official list of “foreign agents”, a label that carries connotations of spying. Its offices across the country have been attacked on numerous occasions.

The Kremlin says the foreign agent law is justified on the grounds that Russians have the right to know when NGOs, media outlets and others are receiving foreign funding to engage in what it considers political activity.

RIA news agency quoted the prosecutor’s office as saying that checks had uncovered legal violations by Memorial’s international and regional arms, and applications had been made to the Supreme Court and Moscow city court to close them. It did not specify what the violations were.

“Liquidating us won’t mean that everything will stop,” Orlov said. “We’ll work from our apartments until they jail us all. But of course, our work will really become much, much harder.”