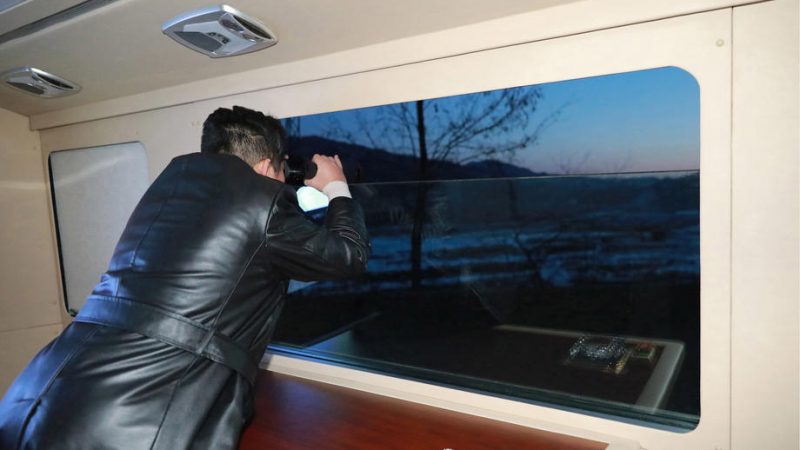 Kim Jong Un, general secretary of the Workers' Party of Korea (WPK) and president of the State Affairs of the Democratic People's Republic of Korea (DPRK), watched the test-fire of hypersonic missile conducted by the Academy of Defence Science, photo taken at an undisclosed location, 11 January 2022. [EPA-EFE/KCNA]

The European Union on Tuesday (11 January) condemned the latest North Korean missile launch, a spokesman for the EU’s High Representative for Foreign Relations said in a statement, urging the country to “respond constructively” to US readiness for diplomacy.

North Korea appeared to test-fire a ballistic missile on Tuesday that may be more advanced than a “hypersonic” one it launched less than a week ago, South Korea’s military said, as Pyongyang pursues increasingly powerful weapons.

North Korea fired what appeared to be a ballistic missile into its eastern sea, its second launch in a week, following leader Kim Jong Un’s calls to expand its nuclear weapons program in defiance of international opposition. https://t.co/jHoDeVbvVm

“The DPRK’s continued pursuit of illegal weapons systems is a threat to international peace and security and goes against international efforts to resume dialogue and engage in actions to help its people,” the statement from the European Union foreign policy spokesman Nabila Massrali said.

“The EU urges the DPRK to respond constructively to the readiness for diplomacy expressed by the United States and the Republic of Korea and engage in actions towards denuclearisation,” the EU statement said.

The EU wants North Korea to completely abandon its nuclear and ballistic missiles programmes and said that until the country complied with its obligations under UN Security Council Resolutions, the EU would continue to implement sanctions against it and encourage others to do the same.

The launch came as the UN Security Council met in New York to discuss last week’s test of what Pyongyang called a hypersonic missile, though Seoul has cast doubt on that claim.

The United States briefly halted some flights on its west coast after North Korea test-launched the ballistic missile on Tuesday.

The Federal Aviation Administration (FAA) revealed it had “temporarily paused departures at some airports along the West Coast” on Monday evening local time after the launch, which South Korea’s military warned showed clear signs of “progress” from last week’s test.

In the decade since leader Kim Jong Un took power, North Korea has seen rapid advances in its military technology at the cost of international sanctions.

The United States condemned what it called a “ballistic missile launch”, and reaffirmed its commitment to defend both South Korea and Japan, with the FAA saying its flight halt lasted “less than 15 minutes.”

“This launch is in violation of multiple UN Security Council Resolutions and poses a threat to the DPRK’s neighbors and the international community,” the State Department said, using the abbreviation for North Korea’s official name.

“We remain committed to a diplomatic approach to the DPRK and call on them to engage in dialogue.”

The missile, fired towards the sea east of the peninsula on Tuesday at around 7:27 am (2227 GMT Monday), flew 700 kilometres (435 miles) at an altitude of around 60 kilometres at Mach 10 speed, Seoul’s Joint Chiefs of Staff said.

Hypersonic missiles travel at speeds of Mach 5 and higher and can manoeuvre mid-flight, making them harder to track and intercept.

The UN Security Council meeting to discuss Pyongyang’s weapons programs came after six countries, including the United States and Japan, called on North Korea to “engage in meaningful dialogue towards our shared goal of complete denuclearization”.

Pyongyang had likely planned the latest launch to coincide with the UN meeting “to maximise its political impact,” Shin Beom-chul, a researcher at the Korea Research Institute for National Strategy, told AFP.

He said the Tuesday launch looked like a hypersonic missile test, judging by the purported speed, but warned against reading too much into it.

“Since South Korea claimed [the January 5 test] wasn’t a hypersonic missile referring to the speed, Pyongyang may have tried to showcase its maximum speed,” this time around, he said.

Hypersonic missiles were listed among the “top priority” tasks for strategic weapons in its current five-year plan, and it announced its first test — of the Hwasong-8 — in September last year.

Pyongyang has also said it had successfully tested new submarine-launched ballistic missiles, a long-range cruise missile, and a train-launched weapon in 2021.

The new tests come as North Korea has refused to respond to US appeals for talks.

Instead of the policy positions on diplomacy, for which Kim’s New Year statements are closely watched, he focused on food security and economic development.

Dialogue between Washington and Pyongyang remains stalled and the country is under multiple sets of international sanctions over its nuclear and ballistic missile programmes.

The impoverished nation has also been under a rigid self-imposed coronavirus blockade that has hammered its economy.