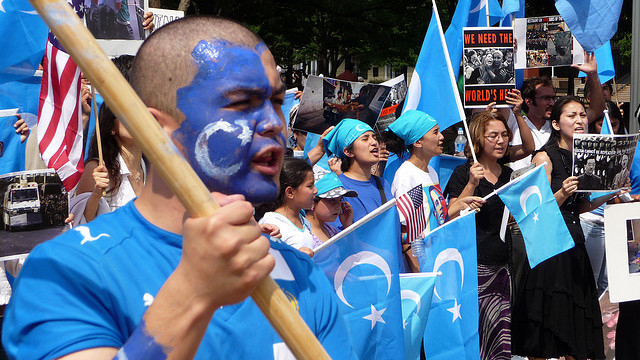 Tensions are building between the EU and its Asian partners, after Thailand agreed to Beijing’s demands to “repatriate” hundreds of Uighurs to China.

Last week’s deportation of 109 Uighurs from Thailand has sparked anger in Turkey, home to a large Uighur diaspora, and fed concern among rights groups and the United States that they could be mistreated upon their return.

China is home to about 20 million Muslims spread across its vast territory, only a portion of whom are Uighurs, who speak a Turkic language and are from Xinjiang.

“Thailand’s deportation of around 100 Uighurs, persons of Turkic origin, including women and children, to China is a breach of the principle of non-refoulement, which is a core tenet of international humanitarian law,” EU foreign affairs chief Federica Mogherini said on Friday (10 July).

According to Mogherini, Thailand has obligations under the Convention Against Torture and Other Cruel, Inhuman or Degrading Treatment or Punishment (CAT) and the International Covenant on Civil and Political Rights (ICCPR). The remaining people of Turkic origin in Thailand should be allowed to depart voluntarily to a country of their choice that is willing to receive them.

US State Department spokesman John Kirby said the deportees “could face harsh treatment and a lack of due process” in China.

“This action runs counter to Thailand’s international obligations as well as its long-standing practice of providing safe haven to vulnerable persons,” Kirby said in a statement. “We remain deeply concerned about the protection of all asylum seekers and vulnerable migrants in Thailand, and we strongly urge the Government of Thailand, and other governments in countries where Uighurs have taken refuge, not to carry out further forced deportations of ethnic Uighurs.”

Turkish protesters attacked the Thai honorary consulate in Istanbul on 8 July in protest over Bangkok’s expulsion of the Ugihurs, smashing windows and ransacking parts of the building.

China claims that some of the Uighurs deported to China last week from Thailand had planned to go to Syria and Iraq to carry out jihad.

In a Saturday report, Chinese state television said some of those deported had admitted to being incited by messages from the Eastern Turkestan Islamic Movement, which Beijing says is waging an insurgency for independence in Xinjiang, as well as the exiled group, the World Uyghur Congress.

“A fair number of them were stirred up and bewitched by terror videos issued by the East Turkestan Islamic Movement and World Uyghur Congress,” the report said.

“While they were being trafficked, there were those who continued to impart and stress religious extremist thinking, instigating them to go to Syria and Iraq to take part in a so-called jihad”, it added.

A senior Chinese police officer said on Saturday that some of the Uighurs who reached Turkey were being sold to fight for groups, such as Islamic State, as “cannon fodder”.

At least 13 of those returned are suspected of terror offences, the report said.

It showed images of people with black hoods over their heads and large numbers pinned to their chests as they sat in a commercial aircraft surrounded by Chinese police in face masks. Upon landing, they were led out with their heads held down, and at least one apparently in chains.

Thailand’s Prime Minister Prayuth Chan-och defended his government’s decision to deport the Uighurs to China and raised the possibility of shutting the Thai Embassy in Turkey after protesters attacked the honorary consulate in Istanbul.

The Turkish Foreign Ministry condemned the expulsion of the Uighurs to China, saying it violated international humanitarian law. Turkish President Recep Tayyip Erdo?an said he planned to raise the plight of the Uighurs during his coming trip to China.

At the recent EU-China summit, Council President Donald Tusk voiced concerns on freedom of expression and association in China, including the situation of the persons belonging to minorities such as Tibetans and Uighurs.

The EU showed concern when General Prayuth Chan-och seized power in Thailand via a military coup in May 2014. Brussels and EU member states rightly suspended partnership and trade agreements with Bangkok until democratic norms and constitutional rule resume. During the past bleak year of junta rule, the generals have dispelled any notion of a ‘benevolent’ coup, announcing that five committees would be established to monitor the international and local media for reports deemed false or a threat to ‘national security.’ Earlier this year, General Prayuth agreed to lift martial law, only to replace it with Article 44 of a nascent constitution, which grants him unparalleled authority over government and law and order, making him a virtually omnipotent and unchecked ruler.