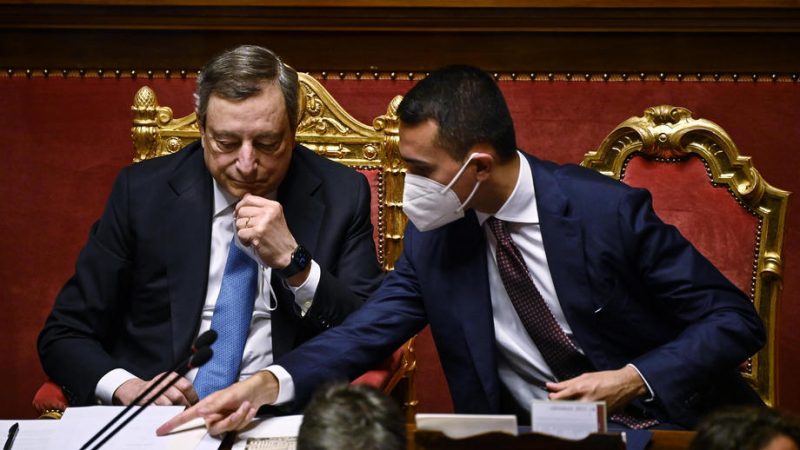 Italian Prime Minister Mario Draghi (L) and Foreign Minister Luigi di Maio (R) chat during a Senate session in Rome, Italy, 19 May 2022. Draghi addressed the issue of the ongoing Russian invasion of Ukraine, saying that Italy will continue to apply pressure on Russia in order to bring Moscow to the negotiating table. [EPA-EFE/Riccardo Antimiani]

Italy and Hungary have urged the EU to call explicitly for a ceasefire in Ukraine and peace talks with Russia, putting themselves at odds with other member states determined to take a hard line with Moscow ahead of a summit next week.

A draft concluding statement for the 30-31 May summit, seen by journalists and dated 19 May, describes the European Union as “unwavering in its commitment to help Ukraine exercise its inherent right of self-defence against the Russian aggression.” It does not mention peace talks.

At a meeting of EU envoys on Friday (20 May), Italy’s ambassador proposed changes to the text saying it should refer to peace talks and set out an immediate ceasefire as one of the EU’s first goals, according to people who attended the meeting.

That proposal was backed by Hungary and Cyprus, which are among the states most critical of a new package of EU sanctions against Russia that has been blocked for weeks because of internal divisions.

Hungary opposes a planned oil embargo, while Cyprus has concerns about a proposed ban on property sales to Russian citizens.

European Commission President Ursula von der Leyen, in a speech at the Davos forum on Tuesday, took a hawkish stand on Russia and made no mention of peace talks.

“Ukraine must win this war, and (Russian President Vladimir) Putin’s aggression must be a strategic failure,” she said.

Today, @wef must address the costs and consequences of Putin’s war of choice.

This is putting our whole international order into question.

And that’s why countering Russia’s aggression is a task for the entire global community.
https://t.co/fU59uhpiuB

The latest draft of the summit conclusions says the EU “remains committed to bolstering the ability of Ukraine to defend its territorial integrity and sovereignty.”

Baltic countries and Poland are among the strongest supporters of a hard line, and Latvia has urged even more explicit wording for increased military support, diplomats said.

A revised draft is due later on Wednesday after a meeting of EU envoys, one diplomat said.

Italy last week proposed a peace plan that would involve the United Nations, the EU and the Organization for Security and Co-operation in Europe as facilitators to initially arrange localised ceasefires.

The plan calls for local cease-fires to allow for civilian evacuations, and creating the conditions for a general cease-fire leading “to a long-lasting peace,” Foreign Minister Luigi Di Maio said on Friday, quoted by the Associated Press.

Italian newspaper La Repubblica reported earlier on the proposal, with points that mostly mirror comments made publicly by Draghi and other Western European leaders.

The first step in the peace plan, according to the newspaper, is a cease-fire and the demilitarization of the front lines.

The second point is that Ukraine would be a neutral country, with its security guaranteed by a not-yet-identified group of countries. The contours of this part of the plan would be discussed at a peace conference.

The third point is a bilateral agreement between Russia and Ukraine to clarify the future of Crimea and Donbas. The agreement would deal with cultural and language rights and guarantee the free movement of people, goods and capital. The plan, according to Repubblica, indicates that Crimea and Donbas would have almost complete autonomy, including in questions of defense, but would be part of Ukraine.

The fourth point would be a multilateral peace agreement between the European Union and Russia that would include a staged withdrawal of Russian troops from Ukraine and the winding down of Western sanctions against Moscow.

Italy's peace plan for Ukraine is classic appeasement. Russia maintains control over occupied territories, Ukraine loses its independence in return for "security guarantees", remember the Budapest memorandum that was worth nothing. https://t.co/OtIoS1sg0y

“A ceasefire must be achieved as soon as possible,” Draghi told the upper house Senate on 19 May.

Draghi made no direct mention of whether Italy would continue to supply arms to Kyiv, something opposed by the 5-Star Movement and the right-wing League, key stakeholders in his multi-party coalition.

There is little public support in Italy for supplying military assistance for Ukraine, opinion polls show.