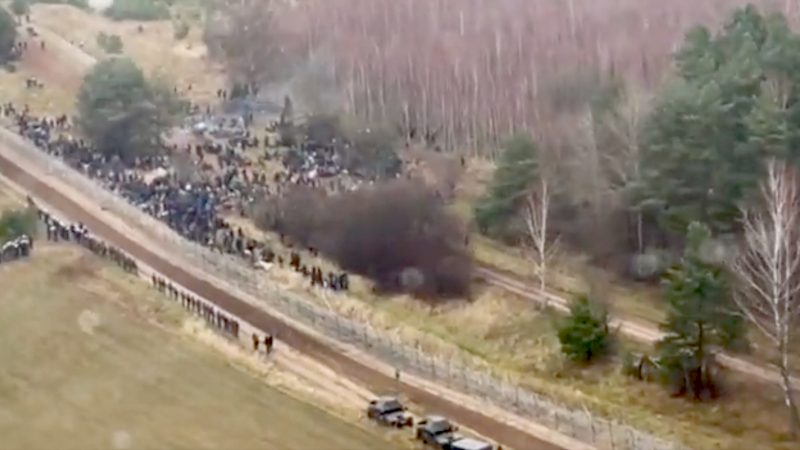 Group of migrants in the Kuźnica area, 8 November 2021. [Polish Ministry of Defence]

In a video shared by the independent Belarusian blogging service NEXTA, migrants carrying rucksacks and wearing winter clothing were seen walking on the side of a highway, heading towards the Kuźnica – Bruzgi border crossing, Polish media reported.

That’s what the situation looks like now from the Belarusian side. Migrants are using trees to try to force the border. pic.twitter.com/sfAHSQ8bVl

The European Commission has estimated the number of migrants to be “several hundred”, confirming that Brussels was in contact with Polish authorities on the issue.

The head of Lithuania’s border guard service, Rustamas Liubajevas, said “the biggest number that was given from Europol, Frontex and Poland’s colleagues is 5,000 people.”

The Belarusian state border committee issued a statement confirming that a large group of refugees was moving along the highway to the Polish border, and saying Warsaw was taking an “inhumane attitude”, without elaborating.

Deputy Foreign Minister Piotr Wawrzyk told Polish public radio that “Belarus wants to cause a major incident, preferably with shots fired and casualties: according to media reports, they are preparing a major provocation near Kuznica Bialostocka, that there will be an attempt at a mass border crossing”.

“We remain in full readiness,” he added.

Poland has erected a barbed-wire fence along the section of its border with Belarus. A state of emergency is in effect along the border to keep out arriving migrants, and Poland plans to build a 5.5-metre high wall along a 180-km border stretch.

Warsaw said on Friday, a Belarusian soldier had tried to fire flares at Polish border troops and others tried to tear down fencing along the frontier.

“Further provocations at the border. Yesterday, a Belarusian soldier tried to fire a flare gun towards Polish soldiers. Fortunately, the gun did not fire,” the Polish defence ministry wrote on Twitter.

At the time of publication, the interior ministry said the situation was under control after Polish services prevented the migrants from forcing their way to the Polish side south of the border crossing in Kuźnica.

“Of course, this is a continuation of the desperate attempt by the Lukashenko regime to use people as pawns to destabilise the Union,” said European Commission spokesperson on home affairs, Adalbert Jahnz.

Pressed by reporters to clarify if Poland has requested the assistance of the EU’s border service or agencies, Jahnz said that “at the moment, there is no presence of European agencies at the Polish border and there hasn’t been such a request”.

The European executive’s foreign affairs spokesperson Peter Stano said discussions were “ongoing about modifying the existing sanctions regime against Belarus in order to take into account also the new and emerging threats as we have seen them recently, including the instrumentalisation of the migration“.

“This is a matter of urgency for the European Union,” Stano said and added the issue will be discussed by the EU foreign affairs ministers at their meeting in Brussels next Monday (15 November).

Speaking to reporters on Monday), Lithuania’s Interior Minister Agnė Bilotaitė said the situation at Lithuania’s – Belarus border is currently “stable and under control”. But following the events at the Polish-Belarussian border, Lithuania is prepared to react to “all possible scenarios”.

General Rustamas Liubajevas said that preparations started already on Saturday as there was information that migrants were gathering in large groups at the Polish- Belarus border.

Lithuanian forces are being deployed at certain parts of the border where the attempts of entering the country are the most likely.

“This is an attack not only against Lithuania or Poland but also against the EU as a whole, and we need to counter it in solidarity,” Interior Minister Bilotaitė said, whose ministry suggested imposing a state of emergency in the country, conditional upon agreement from the government.

At the EU leaders’ meeting last month, Lithuanian President Gitanas Nausėda said that “the number of potential migrants who could cross the border of the European Union is, unfortunately, increasing”, warning that the bloc will not be able to handle 5,000 migrants at the border.

Vilnius is pushing for EU funding to build a border fence and also wants a revamp of the bloc’s asylum policy.

European Commission President Ursula von der Leyen told journalists after last month’s summit of EU leaders, however, that “there is a long-standing common [understanding] in the Commission and with the European Parliament that there will be no funding of barbed wire and walls”.