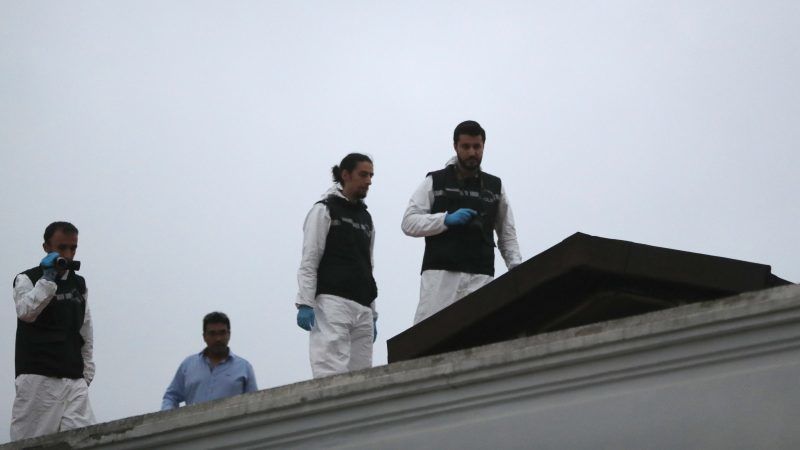 Turkish forensic police officers work on the roof of the residence of the Saudi consul for investigation in Istanbul, Turkey, 17 October 2018. [Erdem Sahin/EPA/EFE]

The EU statement echoed earlier condemnations from member countries France and Germany after Saudi Arabia admitted that Khashoggi was killed inside its Istanbul consulate.

“The emerging circumstances of Jamal Khashoggi’s death are deeply troubling, including the shocking violation of the 1963 Vienna Convention on Consular Relations,” said a statement on Mogherini’s behalf.

The EU insists on the need for continued thorough, credible and transparent investigation.

“Therefore the European Union, like its partners, insists on the need for continued thorough, credible and transparent investigation, shedding proper clarity on the circumstances of the killing and ensuring full accountability of all those responsible for it,” it added.

The statement alleged the violation of article 55 of the Vienna Convention, which is about the “Respect for the laws and regulations of the receiving State.”

The article added: “The consular premises shall not be used in any manner incompatible with the exercise of consular functions.”

The EU expressed its condolences to Khashoggi’s family and friends and hailed the work of a journalist who had often contacted European institutions.

After days of denying that it was involved in the death of the Washington Post journalist at its Istanbul consulate, Saudi Arabia finally admitted early Saturday that Khashoggi had died during a “brawl” inside the mission.

Eighteen Saudis have been arrested in connection with his death and two top aides of Crown Prince Mohammed bin Salman, as well as three other intelligence agents, have been sacked.

Khashoggi vanished after entering the consulate to obtain documents for his upcoming marriage.

After two weeks denying any involvement in the 59-year-old’s disappearance, Saudi Arabia on Saturday said Khashoggi, a critic of the crown prince, died during a fight in the building. An hour later, another Saudi official attributed the death to a chokehold.

“Nothing can justify this killing and we condemn it in the strongest possible terms,” Germany, Britain and France said in their joint statement.

“Nothing can justify this killing and we condemn it in the strongest possible terms” pic.twitter.com/xLp1OhseU2

“There remains an urgent need for clarification of exactly what happened … beyond the hypotheses that have been raised so far in the Saudi investigation, which need to be backed by facts to be considered credible.”

The White House said late on Sunday that US President Donald Trump had spoken to French President Emmanuel Macron and the two had discussed a range of issues including circumstances surrounding Khashoggi’s death.

Reflecting international scepticism over its account, a senior Saudi government official laid out a new version that contradicts previous explanations.

The latest account includes details on how 15 Saudis sent to confront Khashoggi had threatened him with being drugged and kidnapped and killed him in a chokehold when he resisted. A member of the team dressed in Khashoggi’s clothes to make it appear as if he had left the consulate.

Turkish officials suspect Khashoggi was killed inside the consulate by the Saudi agents and his body cut up. Turkish sources say authorities have an audio recording purportedly documenting Khashoggi’s murder.

In a speech on Sunday, Turkish President Recep Tayyip Erdoğan appeared to suggest he was getting ready to release some information about the Turkish investigation, and would do so at his weekly speech on Tuesday to members of his ruling AK Party.

Erdoğan has remained largely silent on the case, although Turkey’s pro-government newspapers have released information about events at the consulate.

Turkey’s Anadolu agency said early on Monday that Erdoğan and Trump had spoken on the telephone and agreed that “all aspects” of the case needed to be cleared up.

For Saudi Arabia’s allies – particularly in the West – the question will be whether they believe that the prince, who has painted himself as a reformer, has any culpability. King Salman, 82, has handed the day-to-day running of Saudi Arabia to him.

“I am not satisfied until we find the answer. But it was a big first step, it was a good first step. But I want to get to the answer,” Trump told reporters this weekend, when asked about the Saudi investigation and Riyadh’s firing of officials.

In an interview with the Washington Post, Trump said that “obviously there’s been deception, and there’s been lies.” He had suggested last week that “rogue killers” might have been responsible for Khashoggi’s death, a comment critics called an effort to play down the crisis.

It's no secret that Saudi cash has repeatedly enriched the president and Jared Kushner https://t.co/PAcR4Fd278 via @bopinion

A leading Republican US senator said he believed the crown prince was behind the killing, adding that the Saudis had lost credibility in their explanations of his death. “Yes, I think he did it,” Bob Corker, chairman of the Senate Foreign Relations Committee, told CNN, referring to the crown prince.

The king also ordered a restructuring of the intelligence service, to be led by Prince Mohammed, suggesting the prince still retained wide-ranging authority.

Some governments and prominent executives have said they would pull out of a forthcoming investment conference in Saudi Arabia.

According to the senior Saudi official, the Saudi team rolled up Khashoggi’s body in a rug, took it out in a consular vehicle and handed it to a “local cooperator” for disposal.

‘We don’t know where the body is,’ says Saudi foreign minister on Khashoggi https://t.co/I2bqnJ33UL pic.twitter.com/X4h16syddJ