EU foreign policy chief Josep Borrell said he deplored the “widespread detentions and disproportionate use of force” against protesters and journalists in Russia on Sunday (31 January).

Police detained more than 5,000 people across Russia and blocked off the centre of Moscow in a massive clampdown on protests demanding the release of jailed Kremlin critic Alexei Navalny.

In a massive show of force, police imposed a sweeping security lockdown in the heart of Moscow, sealing off streets to pedestrians near the Kremlin, closing metro stations and deploying hundreds of riot police as snow fell.

At one point, a column of protesters marched towards the prison in northern Moscow where Navalny is being held, chanting “Let him go!”. In another scene, people in a crowd raised their hands above their heads in front of a row of riot police and chanted “we’re not your enemies”.

Police said protesters could face criminal prosecution for attending or calling for an unauthorised demonstration and warned they could spread COVID-19.

In St Petersburg and Moscow police used force to detain protesters and were occasionally seen using tasers. One protester had a bloodied, bandaged head.

In the far eastern city of Vladivostok, video footage showed protesters chanting “Putin is a thief” as they linked hands and marched in temperatures of around -13 Celsius (8.6 Fahrenheit). Police detained more than 120 people in the city, OVD-Info said.

Dozens turned out in Siberia’s city of Yakutsk despite temperatures of -42 Celsius. Eleven were detained in Tomsk, the Siberian city that Navalny visited before suddenly collapsing on a domestic flight last August, OVD-Info said.

“I deplore widespread detentions and disproportionate use of force against protesters and journalists in #Russia again today,” Borrell tweeted.

I deplore widespread detentions and disproportionate use of force against protesters and journalists in #Russia again today. People must be able to exercise their right to demonstrate without fear of repression. Russia needs to comply with its international commitments.

“People must be able to exercise their right to demonstrate without fear of repression. Russia needs to comply with its international commitments.”

Borrell is due to visit Moscow from next Thursday for talks on EU-Russia relations, during which eh will press the Kremlin to free critic Navalny. The opposition figure faces a court hearing next week that could end with him receiving a hefty jail term. 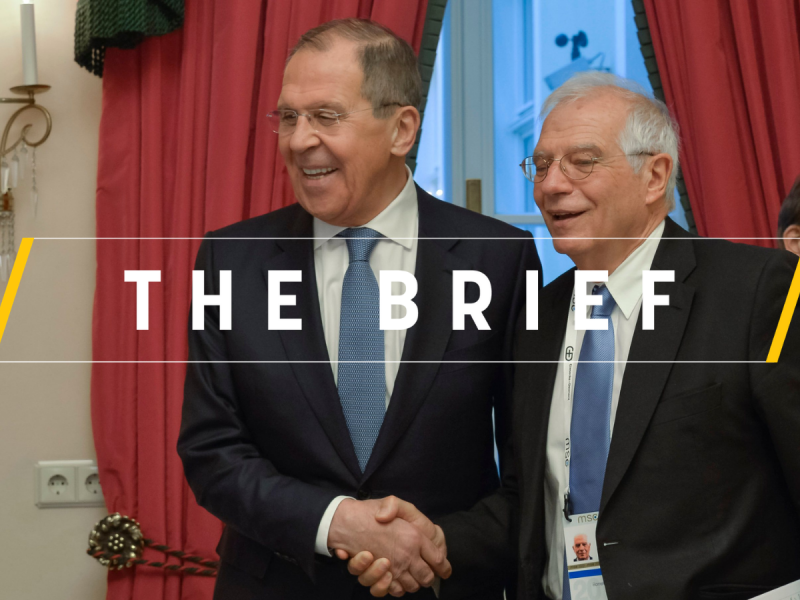 The Brief – Wind of change

EU foreign affairs chief Josep Borrell will go to Russia in the first week of February. The decision to make a rare physical visit in these COVID times is largely on account of the Navalny dossier: Borrell is expected to press for the release of the Kremlin critic.

Navalny was detained at a Moscow airport in mid-January after flying back to Russia from Germany where he was recovering from an August poisoning he blames on the Kremlin.

Borrell’s three-day trip to Russia — the first for a top envoy from Brussels since 2017 — has drawn criticism from some of the bloc’s 27 nations. Their concern is it will send the wrong signal to Moscow.

But he has insisted he will send a “clear message” to his counterpart Sergei Lavrov when he meets him.

Some EU states have mooted sanctions over the crackdown but so far the bloc has held off as it waits to see if President Vladimir Putin’s most prominent domestic opponent is released.

The EU in October slapped asset freezes and visa bans on six senior Russian officials over the “use of chemical weapons in the assassination attempt” of Navalny.

Relations with Moscow nosedived in 2014 over its annexation of Crimea and fuelling of the conflict in east Ukraine.

Borrell — who is also set to meet representatives of Russian civil society — is looking to enlist the Kremlin’s help in efforts to revive the 2015 nuclear pact with Iran.

He will be keen for Moscow to exert its influence over Tehran as new US President Joe Biden weighs rejoining the deal.