A year ago, when von der Leyen took over, her team pledged to push for a more “geopolitical Commission” and for Europe to find a more assertive voice in foreign policy.

Since then, the EU has been struggling to address numerous crisis, partly because powers remain largely within the remit of EU member states.

“Why are even simple statements on EU values delayed, watered down or held hostage for other motives?” von der Leyen asked in her first annual State of the Union speech.

“When member states say Europe is too slow, I say to them ‘be courageous and finally move to qualified majority voting,” she said. This would allow the EU to act on more issues without the increasingly onerous process of securing unanimity among the EU27.

She also called for an urgent revival of the global multilateral system and for the EU to lead the way in reforms as “great powers either withdraw from institutions or take them hostage for their own interests.”

Last December, EU foreign ministers cleared the way to start work on a European ‘Magnitsky Act’, named after a Russian lawyer who died of mistreatment in a Moscow prison.

Von der Leyen announced the Commission would move forward with a proposal on a new sanctions regime that would allow the EU to impose sanctions more quickly on specific individuals anywhere in the world, similar to the 2012 Magnitsky Act in the US.

In view of the bloc’s recent difficulties to impose sanctions on Belarus, Turkey or Russia, there is a “need to complete our toolbox”, Von der Leyen said.

In a dig at French President Emmanuel Macron’s thaw with Moscow, she chided “those who advocate for closer ties with Russia”, calling the poisoning of Kremlin critic Alexei Navalny “not an isolated incident”.

The same pattern had previously been seen in Georgia and Ukraine, Syria and Salisbury – and in interfering in elections around the world, she said.

“This pattern does not change – and no pipeline will change anything,” von der Leyen said, adding that the controversial Nord Stream 2 gas pipeline would not help to improve EU-Russia ties.

The EU is ready to build a new transatlantic agenda with whoever wins the US presidential election in November, von der Leyen said.

“We might not always agree with recent decisions by the White House, but we will always cherish the transatlantic alliance – based on shared values and history, and an unbreakable bond between our people,” she said.

“So whatever may happen later this year, we are ready to build a new transatlantic agenda, to strengthen our bilateral partnership – be it on trade, tech or taxation,” she added.

As Europe’s diplomacy gears up for a crucial September summit meant to define the EU’s response to Turkey’s disruptive activities in the region, the Commission chief said nothing could justify Ankara’s intimidation of Greece and Cyprus in a dispute over energy resources.

Moreover, she stressed that although Turkey was an “important neighbour”, the “distance appears to be growing”.

“Yes, it (Turkey) is hosting millions of refugees, for which we support them with considerable funding. But none of this is justification for attempts to intimidate its neighbours,” Von der Leyen said.

Greece and Cyprus can count on Europe’s “full solidarity on protecting their legitimate sovereignty rights”, she added.

After the Moria refugee camp on Greece’s Lesvos island burned down last week, some suggested the EU’s planned migration policy update had also gone up in flames, but von der Leyen said the Commission has brought forward to next week (23 September) the release of the new migration legislation.

“Migration is an issue that has been discussed long enough… a lot has been done since 2015, but a lot is still missing,” she said, in reference to years of bitter deadlock over some EU countries’ refusal to accept the redistribution of asylum seekers.

“I can announce that we’ll abolish Dublin regulation and replace with a new EU migration governance system,” she said, unveiling the new migration pact will have a common structure on returns and a new solidarity mechanism.

“I expect all member states to step up, too,” she said. “Migration is a European challenge and all of Europe must do its part.”

On Western Balkans, Von der Leyen once again avoided the word “enlargement,” instead saying that “Europe will always be ready to build strong partnerships with our closest neighbours.”

“The Western Balkans are part of Europe – and not just a stopover on the Silk Road,” she said.

A declaration signed by EU leaders and their Western Balkans counterparts at a summit in May demanded that enlargement hopefuls follow EU foreign policy objectives, in what appeared to address the concerns about some countries aligning themselves too closely to Russia and China.

China, Russia and Turkey were quick to fill the gap left by the EU in the region in the early days of the pandemic, sending help that was widely celebrated by regional politicians, including Serbia’s President Aleksandar Vučić, who said in March that “European solidarity is a fairytale”. 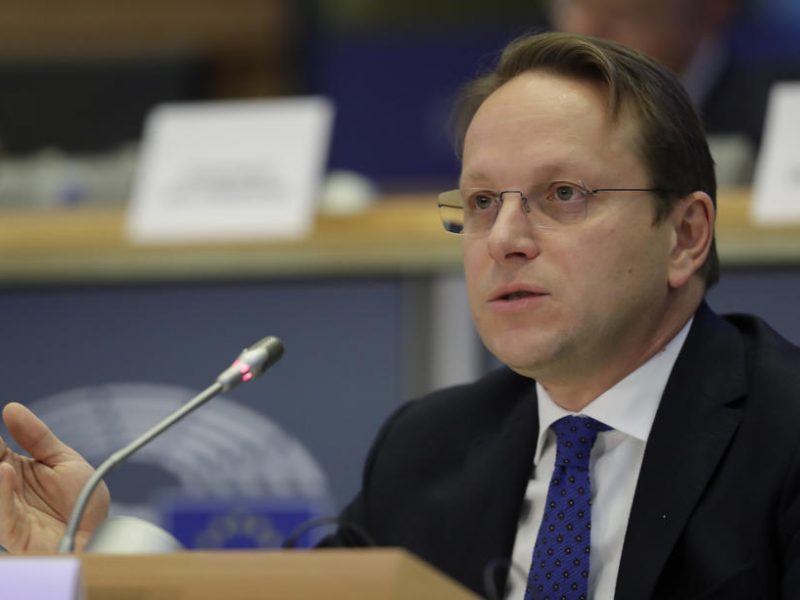 Enlargement Commissioner Oliver Várhelyi confirmed to EU lawmakers on Tuesday (19 May) that the publication of the European Commission’s enlargement package has been postponed until autumn due to the COVID-19 pandemic.

The Commission will publish in October its long-delayed enlargement package that will analyse the accession process and contain country-specific reports on the progress of the candidates and EU hopefuls.

It also is expected to present its investment programme for the region, initially envisioned for May, which is touted to focus on energy, transport, green and digital agendas and bring the region closer to the bloc economically.