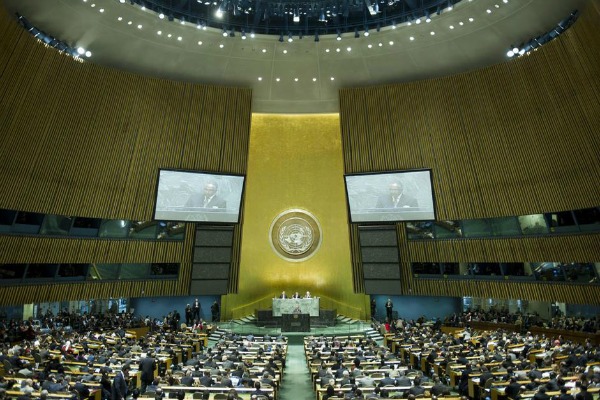 The 193-nation UN General Assembly has overwhelmingly approved the de-facto recognition of the sovereign state of Palestine. Fourteen EU countries voted in favour, 12 abstained and only the Czech Republic joined the United States and Israel in opposing the move.

The UN victory for the Palestinians was a diplomatic setback for the United States and Israel, which voted against the move to upgrade the Palestinian Authority's observer status at the United Nations to "non-member state" from "entity," like the Vatican.

Britain called on the United States to use its influence to help break the long impasse in Israeli-Palestinian peace talks. Washington also called for a revival of direct negotiations.

There were 138 votes in favour, nine against and 41 abstentions in the vote held on Thursday (29 November). Three countries did not take part in the vote, held on the 65th anniversary of the adoption of UN resolution 181 that partitioned Palestine into separate Jewish and Arab states.

The vote highlighted how deeply divided Europe is on the Israeli-Palestinian conflict.

The Czech Republic was unique in Europe, joining the United States, Israel, Canada, Panama and tiny Pacific Island states likes Nauru, Palau and Micronesia in voting against the move.

Ahead of the vote, EU High Representative Catherine Ashton said in a statement that the EU had repeatedly expressed its support and wish for Palestine to become a full member of the United Nations as part of a solution to the conflict.

Thousands of flag-waving Palestinians in the West Bank and the Gaza Strip set off fireworks and danced in the streets to celebrate the vote.

The assembly approved the upgrade despite threats by the United States and Israel to punish the Palestinians by withholding funds for the West Bank government. U.N. envoys said Israel might not retaliate harshly against the Palestinians over the vote as long as they do not seek to join the International Criminal Court (ICC).

If the Palestinians were to join the ICC, they could file complaints with the court accusing Israel of war crimes, crimes against humanity and other serious crimes.

US Secretary of State Hillary Clinton called the vote "unfortunate and counterproductive," while the Vatican praised the move and called for an internationally guaranteed special status for Jerusalem, something bound to irritate Israel.

The much-anticipated vote came after Mahmoud Abbas, president of the Palestinian Authority, denounced Israel from the UN podium for its "aggressive policies and the perpetration of war crimes," remarks that elicited a furious response from the Jewish state.

"Sixty-five years ago on this day, the United Nations General Assembly adopted Resolution 181, which partitioned the land of historic Palestine into two states and became the birth certificate for Israel," Abbas told the assembly after receiving a standing ovation.

"The General Assembly is called upon today to issue a birth certificate of the reality of the State of Palestine," he said.

"These are not the words of a man who wants peace," Netanyahu said in a statement released by his office. He reiterated Israeli calls for direct talks with the Palestinians, dismissing Thursday's resolution as "meaningless."

A number of Western delegations noted that Thursday's vote should not be interpreted as formal legal recognition of a Palestinian state. Formal recognition of statehood is something that is done bilaterally, not by the United Nations.

Granting Palestinians the title of "non-member observer state" falls short of full UN membership – something the Palestinians failed to achieve last year. But it does have important legal implications – i t would allow them access to the ICC and other international bodies, should they choose to join.

Abbas did not mention the ICC in his speech. But Palestinian Foreign Minister Riyad al-Maliki told reporters after the vote that if Israel continued to build illegal settlements, the Palestinians might pursue the ICC route.

"As long as the Israelis are not committing atrocities, are not building settlements, are not violating international law, then we don't see any reason to go anywhere," he said.

"If the Israelis continue with such policy – aggression, settlements, assassinations, attacks, confiscations, building walls – violating international law, then we have no other remedy but really to knock those to other places," Maliki said.

Israel was established in 1948 on the British mandate of Palestine, after fighting which resulted in the flight of at least 750,000 Palestinians from their homes.

Nineteen years later, the refugee crisis was exacerbated by the invasion and occupation of the West Bank and Gaza Strip in the Six Day War of 1967. In its aftermath, Israel annexed east Jerusalem and built settlements across the West Bank, which now houses 500,000 Israeli Jews.

With the Venice Declaration in 1980, the EU became the first third party to the international Israeli-Palestinian conflict to acknowledge the Palestinian right to self-determination. In 1986, the EU went further, enacting a regulation allowing Palestinians in the Occupied Territories to export products to Europe under the label "Made in the West Bank and Gaza".

After the Oslo Accord was signed in 1993, the EU increased its involvement in the peace process by financially supporting the nascent Palestinian Authority. However, the EU's position that any peace agreement should closely follow the original 1967 borders, allowing Palestinians to make their state capital in east Jerusalem, is strongly opposed by Israel.

In December 2010, 26 former EU leaders, including Javier Solana and Helmut Schmidt, called for boycotts and sanctions against Israel because of its continued settlement construction.