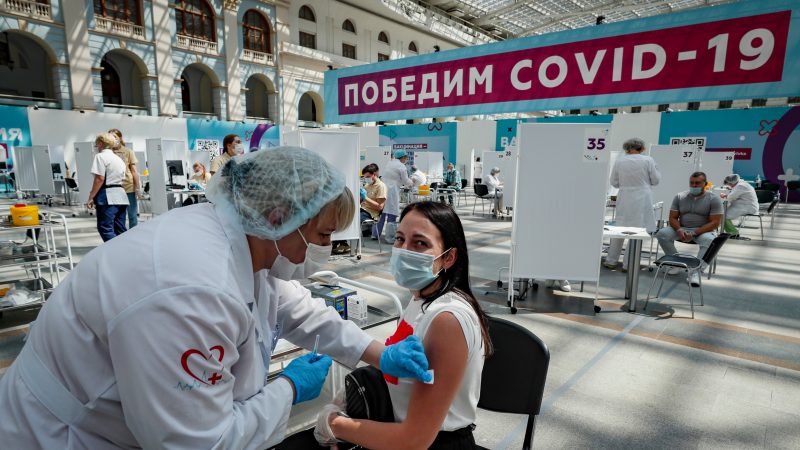 A woman receives a shot of Russia's Sputnik V vaccine against COVID-19 disease at a vaccination center in Gostinny Dvor, a huge exhibition place in Moscow in Moscow, Russia, 6 July 2021. [EPA-EFE/YURI KOCHETKOV]

The developers of Russia’s Sputnik V coronavirus vaccine have repeatedly failed to provide data that regulators deem to be standard requirements of the drug approval process, according to five people with knowledge of EU efforts to assess the drug, providing new insight into the country’s struggle to win foreign acceptance of its product.

Reuters reported last month that the European Medicines Agency (EMA)’s review of the drug’s safety and efficacy was delayed because a 10 June deadline to submit data on the vaccine’s clinical trials was missed, according to one of those people, who is close to the agency, and another person familiar with the matter. The EMA is the European Union’s medicines watchdog.

Separately, an assessment of Sputnik V by a French delegation of scientists in advance of the EMA review found that the vaccine developers were unable to document that the so-called master cell bank, the initial building block of the vaccine, complied with specific EU regulation on preventing disease contamination, according to four people with knowledge of the delegation’s findings.

The EMA, which launched its formal review of the Russian vaccine in March, had previously been expected to decide in May or June whether to approve use of the drug in the EU.

The person close to the EMA said notable missing clinical information during the EMA review included case report forms that record any adverse effects people experienced after receiving the jab in trials. It is standard practice for developers to submit such forms, this person added. It was also not clear how the scientists working on the vaccine tracked the outcomes of people given a placebo, the person said.

The watchdog rates such data shortcomings on a scale that goes from “critical” – the most serious – to “major” to “minor.” The person said nothing had met the critical threshold, “but there are several ‘majors,’” indicating issues that can be remedied but require much work. The person added they didn’t expect the review to be completed until after the summer.

Several people who have interacted with Russia’s Gamaleya Institute, which developed Sputnik V and oversaw the clinical trials, attribute the repeated failure to provide some information to lack of experience in dealing with overseas regulators. “They are not used to working with a regulatory agency like the EMA,” the person close to the agency said, referring to Gamaleya’s scientists.

Gamaleya is supervised by Russia’s health ministry. Neither Gamaleya nor the ministry responded to questions for this report. The Kremlin declined to comment.

RDIF said Reuters’ reporting contained “false and inaccurate statements” based on anonymous sources who are attempting to harm Sputnik V as part of a disinformation campaign. RDIF suggested the vaccine could be under attack by the “Western pharmaceutical lobby,” without offering evidence of such a campaign.

RDIF added that the vaccine is registered in more than 60 countries and that studies from places including Argentina, Mexico and Hungary that are already using the vaccine show it is safe and effective. It said there had been “no reported serious adverse events.”

On the French delegation’s findings, RDIF said “the Sputnik V cell bank is fully compliant with all EMA requirements.”

RDIF said it is working closely with the EMA, whose inspectors have visited Sputnik V production facilities. “From the inspections already completed we’ve received no major critical comments and none of the issues raised doubted the safety and efficacy of the vaccine,” said RDIF.

One of the people with knowledge of European efforts to assess the drug said they had no reason to doubt that Sputnik is a safe and effective vaccine. A study by international scientists published in the Lancet in February found Sputnik to be more than 90% effective.

The EMA, which is headquartered in Amsterdam, declined to comment on details of the review while it is ongoing. The agency said it applies the same standards to all applicants and to authorise a COVID-19 vaccine the EMA requires “detailed information on its safety, efficacy and quality.”

The delay could allow rival vaccine makers to sew up key markets. The stumble is one of several for the developers of Sputnik V in dealing with some overseas drugs watchdogs reviewing the vaccine, who have identified a lack of data, insufficient documentation of methodology and non-compliance with what they view as standard protocol.

Brazilian regulators initially rejected imports of Sputnik V after technical staff highlighted “inherent risks,” citing a lack of data guaranteeing its safety, quality and effectiveness. Slovakia’s drug agency said it had insufficient data from Moscow before the government ultimately gave a limited go-ahead for the vaccine. Hungary gave emergency approval for the jab despite what several people with knowledge of the process said were concerns raised by some specialists working on the review at Hungary’s drug regulator about insufficient documentation.

Brazilian regulator Anvisa last month gave conditional approval for imports of Sputnik V. The conditions imposed “seek to overcome the information gaps in the process and ensure minimum conditions of vaccine safety and quality,” Anvisa told Reuters. It added that Sputnik V has not been distributed to people in Brazil.

Hungary’s regulator, at the time it approved Sputnik V in January, publicly acknowledged that there can be conflicting opinions during an authorization process and that it had received reassuring answers to its questions regarding the vaccine. The Slovak government this month said it sold most of its Sputnik V back to Russia, citing low interest.