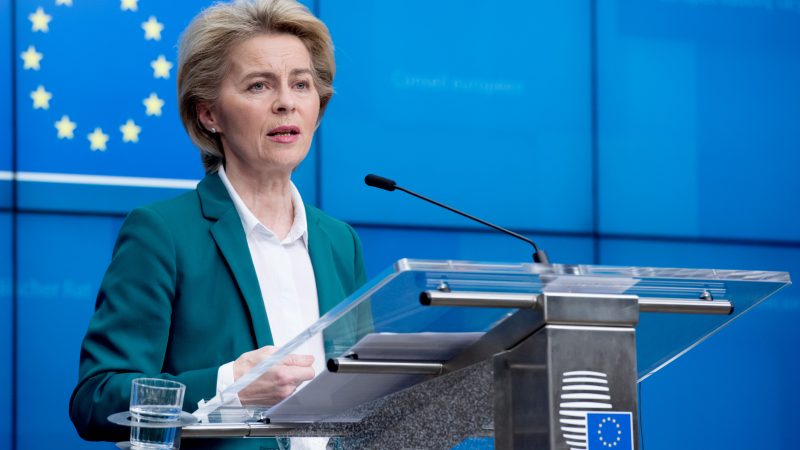 “The less travel, the more we can contain the virus. Therefore … I propose to the heads of state and government to introduce a temporary restriction on non-essential travel to the EU,” European Commission chief Ursula von der Leyen told a press conference in Brussels, after she had briefed the leaders of the G7 group of wealthy nations by telephone.

“These travel restrictions should be in place for an initial period of 30 days, but can be prolonged as necessary.” The travel ban will cover all EU member states and the four non-EU Schengen members (Liechtenstein, Switzerland, Norway and Iceland).

In the proposal, seen by EURACTIV, the Commission stresses that “a temporary travel restriction could only be effective if decided and implemented by Schengen states for all external borders at the same time and in a uniform manner.”

The Commission hopes that this travel ban “would also enable the lifting of internal border control measures” introduced by several member states. “These measures risk having a serious impact on the functioning of the Single Market,” the document reads.

2⃣Temporary restriction on non-essential travel to the EU (30 days) pic.twitter.com/9bda9MntF0

EU citizens and third-country nationals who are long-term residents, medical personal and researchers and frontier workers will be exempted from the travel ban. UK citizens will be also able to visit the bloc, said von der Leyen

The proposal adds to the exceptions diplomats, the staff of international organisations, military personnel and humanitarian aid workers in the exercise of their functions; workers involved in the transport of goods, passengers in transit; passengers travelling for imperative family reasons; persons in need of international protection or for other humanitarian reasons.

At the same time, member states and non-EU Schengen countries should “strongly encourage” their citizens not to travel outside their territories in order to prevent the further spread of the virus to other countries, the text said.

The document said that any possible prolongation beyond 30 days would be assessed depending on further developments.

All member states included in the restrictions will have to validate the Commission’s proposal.
Von der Leyen said that over the weekend she had spoken with the majority of member states and there was a “strong support” to introduce the travel ban, and would conclude her contacts tomorrow.

At the same press conference, European Council President Charles Michel said that over the last days, member states have stepped up their efforts to develop an EU approach to contain the spread of the virus, also in regards to border management.

He emphasised the need for reducing “the unnecessary movement of citizens” to contain the pandemic as much as possible, while ensuring the free flow of goods and workers in the internal market.

In this regard, von der Leyen also proposed so-called ‘green lanes’ to give priority to the transport of goods, like medical goods, perishable goods, notably food and emergency services inside the internal market.

By introducing these fast lanes, the Commission hoped that the free flow of medical material, parts for factories and goods for shops and supermarkets can reach their destination despite the border controls introduced by a growing number of member states.