The EU will launch its new naval mission to enforce an UN arms embargo on Libya by the end of the month, but it still needs to be determined which member states will contribute to the operation, EU’s chief diplomat Joseph Borrell said on Tuesday (31 March).

EU27 ambassadors approved the mission, dubbed ‘Operation Irini’ after the Greek word for ‘peace’, after clearing last-minute objections on 26 March.

“This operation is very different from the one it will replace, Operation Sophia”, Borrell said, adding that the primary objective of this mission is to contribute to the control of the arms embargo, a permanent ceasefire and to the peace process in Libya.

The new mission will start when Operation Sophia ends on 31 March, with a renewable one-year mandate. Irini will be led by EU Operation Commander Admiral Fabio Agostini, with its headquarters to be located in Rome.

Ministers are to review it every four months to check it is not having a “pull effect” – encouraging migrants to set out on risky crossings over the Mediterranean.

Operation Sophia, running since 2015, stopped deploying ships a year ago after Italy, facing an anti-immigrant backlash, said it would no longer take migrants rescued at sea.

The negotiations on the new mission were delayed by divisions between governments on what to do with any migrants picked up during Irini’s operations, with Italy refusing to receive them.

Greece agreed to be the landing point for any migrants rescued in the course of the mission, though its primary purpose is to enforce the embargo.

However, it’s not clear yet where these migrants will stay after they arrive at Greek ports.

Meanwhile, EU diplomats acknowledged the bloc will be unable to patrol the Egypt-Libya land border, through which arms still flow into the country.

EU naval vessels, provided and crewed by member state navies, will operate in the eastern Mediterranean with the authority to board ships suspected of delivering arms to Libya’s warring parties.

A conference on Tuesday (31 March) is meant to determine which member states will contribute assets to the operation, although Borrell acknowledged “it will take some time to send the ships to the sea”.

So far, it is expected that Spain and Italy will play a major role as they did with Operation Sophia. Germany, meanwhile, intends to only send a maritime reconnaissance aircraft with crew and therefore adhering to the announcement by German defence minister Annegret Kramp-Karrenbauer who initially said the country does not intend to send any ships, during a speech to the German Maritime Academy on 12 March.

An effective arms embargo is seen as crucial to stabilising Libya, where the UN-recognised Tripoli government is under attack from the forces of strongman Khalifa Haftar, who controls much of the country’s south and east.

According to Borrell, the fighting in Libya has increased in recent days, while the world is focused on combating the coronavirus pandemic.

“No one can afford two wars at the same time (…) Irini is also a contribution to this purpose,” he added.

The secondary tasks of Operation Irini will be to monitor and gather information on illicit exports from Libya of petroleum, crude oil and refined petroleum products, disrupt the business model of human smuggling and trafficking networks through information gathering and patrolling by planes and contribute to the capacity building and training of the Libyan Coast Guard and Navy.

The initial agreement to create a Libya-focused maritime surveillance mission in the Mediterranean came after Austria and Hungary, who feared that reviving the mission would create a de facto rescue fleet that would ferry migrants across the sea to Europe, dropped their objections in February.

“There is still a long way to go before the arms embargo is fully implemented and a lasting peace is achieved in Libya. We in the EU have demonstrated that we are not letting up in our commitment and are maintaining pressure on the parties to the conflict and their supporters,” German foreign minister Heiko Maas said in a statement after the agreement was reached. 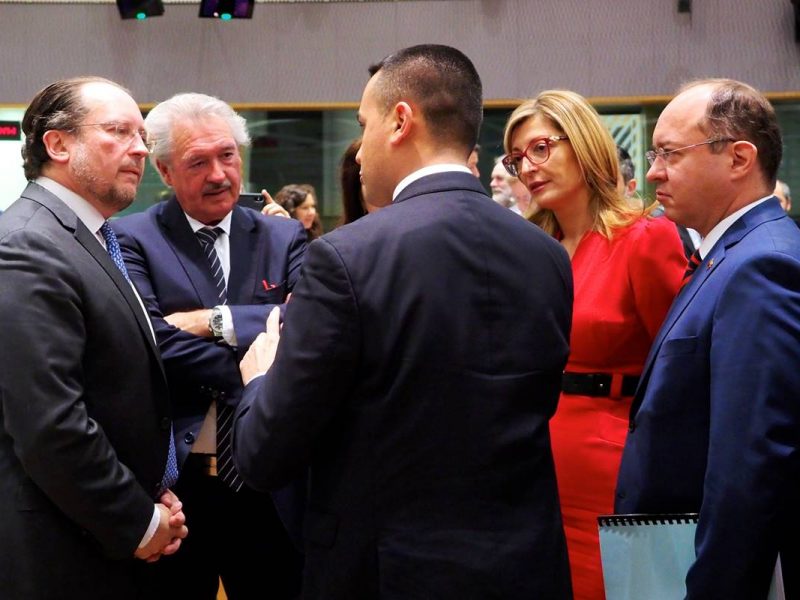