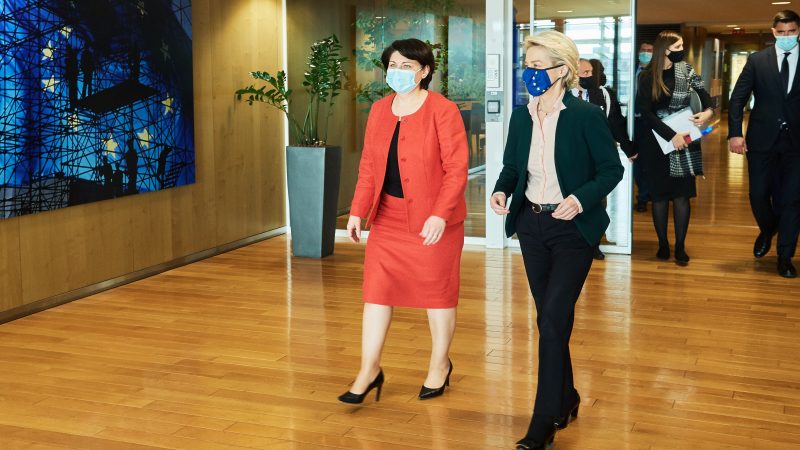 The European Union on Wednesday (27 October) said it was giving Moldova €60 million to help cope with a gas crisis after Russia’s Gazprom hiked prices.

Gavrilița tweeted that she was “deeply touched by the EU show of solidarity” and that the grant was “great news for the Moldovan people”.

Deeply touched by the EU show of solidarity expressed in the meeting with Commission President @vonderleyen.

The €60 million grant support to help manage the current energy crisis is great news for the #Moldovan people 🇲🇩🇪🇺 pic.twitter.com/bsjr9J9M1u

Moldova’s government has declared a state of emergency and imported gas from outside Russia — its Communist-era master — for the first time in its history after Gazprom hiked prices for the impoverished country.

Moldova’s gas contract with Russia’s Gazprom expired at the end of September, and the two have failed to agree on a new price.

Last week, Russian media reported that Gazprom is threatening to cut the country off if it does not settle its debts and sign a new contract by December.

In the last few days, Moldova has been buying some gas in Europe and the government has said it will continue talks with Gazprom.

Moldova’s Energocom state energy firm said on Wednesday it had bought 1.5 million cubic meters (mcm) of gas with the delivery set for 28 October via Ukraine and Romania. The gas would be supplied by the Swiss-based DXT Commodities and Poland’s PGNiG.

The Kremlin has insisted the dispute is “absolutely commercial” despite fears Moscow is using its energy might to try to pull Moldova back under its sway after Gavrilița vowed closer ties to the EU.

The Kremlin on Wednesday denied a media report which suggested the Russian company was using gas talks with Chisinau to try to extract political concessions and said the negotiations were purely commercial.

Wedged between Romania and Ukraine, the country of 2.6 million receives gas from Russia via its pro-Moscow separatist region of Transnistria and Ukraine.

Russian President Vladimir Putin said this month that allegations from European capitals that Moscow was using energy as a geopolitical weapon during a global supply crunch were “politically charged babble that have no grounds”.