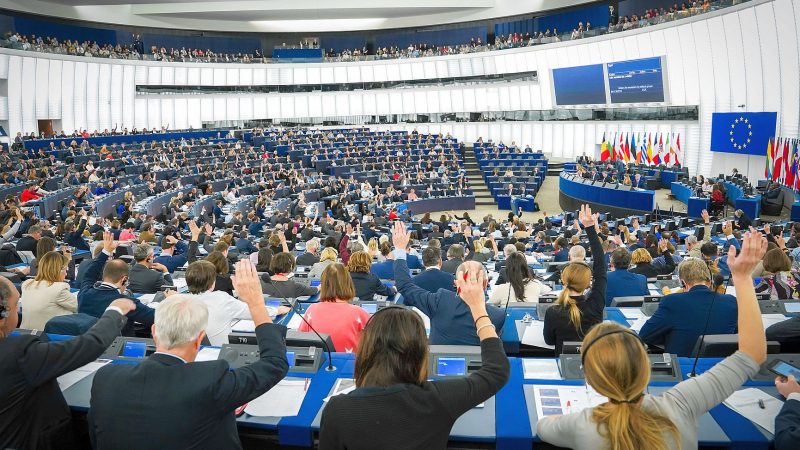 MEPs vote during a plenary session in Strasbourg on 24 October. [European Parliament]

MEPs condemned Turkey’s military intervention in northeast Syria in a resolution which received cross-party support in the European Parliament on Thursday (24 October), urging Ankara to withdraw all of its forces from Syrian territory or expect “economic measures”.

On Wednesday (23 October), MEPs debated the Turkish offensive and its consequences and urged the EU to be more active and ambitious in its security and defence policy – in a rare consensus across the political spectrum.

Although the European Parliament has no direct influence on the EU’s foreign and security policy, it can considerably restrict EU funding towards third countries.

In the adopted resolution, MEPs call for “appropriate and targeted economic measures against Turkey” and the freezing of preferential treatment for Turkish agriculture exports to the EU.

It also “calls on the [European] Council to introduce a series of targeted sanctions and visa bans to be imposed on Turkish officials responsible for human rights abuses during the current military intervention”.

As a last-resort sanction, it also urges the suspension of the EU customs union with Ankara, a measure that would hit the €200 billion annual trade between the bloc and Turkey.

The European Parliament could also consider blocking any new EU funding to help Turkey handle the 3 million Syrian refugees on its territory, although Parliament sources told EURACTIV such a step is “rather unlikely”.

Currently, a few EU member states argue for freezing funds, while others want EU money to continue flowing to Turkey to avoid a repeat of the 2015 refugee crisis.

MEPs pulled no punches during Wednesday’s heated debate. A number of parliamentarians said they find it unacceptable that Turkish President Recep Tayyip Erdoğan has “weaponised” refugees and “used them to blackmail the EU”.

Since Turkey launched its military invasion, alongside a high number of civilian and military casualties, at least 300.000 citizens have been displaced, MEPs underlined, quoting UN sources.

In the resolution text, MEPs also “firmly rejected” Turkey’s safe zone ambitions and instead called for a UN-led security zone to be set up in the area.

Green MEP Tineke Strik, shadow rapporteur for the Turkey resolution, called for “targeted sanctions and visa bans on Turkish government officials,” as well as “a full arms embargo,” and “working on suspension of the trade agreements”.

“De-escalation and the protection of the civilian population against war crimes and ethnic cleansing must be the top priority,” she said, adding that this would include an increased European effort to protect Syrian refugees.

“We therefore urge the member states to increase the number of resettlements of Syrian refugees to the EU and to refrain from their returns to Turkey,” Strik concluded.

Last week, EU foreign ministers failed to reach a common decision on an EU-wide arms embargo against Turkey, although some governments committed to halting their arms exports to Ankara, while EU leaders did not discuss Turkey’s intervention in Syria at their two-day summit.

The resolution sparked a diplomatic rebuke from Ankara.

“We reject in totality the approach adopted today by the European Parliament on Operation Source of Peace”, the Turkish foreign ministry reacted in a statement.

“No force will be able to prevent Turkey from taking the necessary measures to ensure its security,” the statement said.