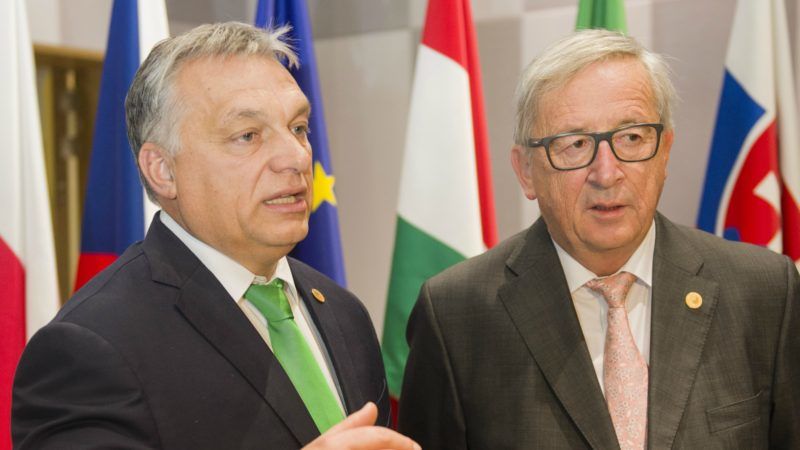 “EU united on roll-over of economic sanctions on Russia,” Tusk tweeted after leaders discussed the issue at a summit in Brussels.

The EU imposed the economic sanctions against Russia after Malaysia Airlines flight MH17 in July 2014 was shot down over Ukraine, killing 298 people, an attack blamed by the EU on pro-Russian rebels.

The decision to extend the measures, which was widely expected, came at a summit in Brussels which saw the launch of a major new EU defence cooperation agreement.

Reinforcing European defence
My remarks at the event celebrating the launch of the Permanent Structured Cooperation #PESCO https://t.co/k7b0OX1WMq pic.twitter.com/7kWt9s2C8l

Tusk called the agreement, inaugurated by EU leaders flanked by soldiers in combat uniforms, “bad news for our enemies“.

The decision to roll sanctions over came after French President Emmanuel Macron and German Chancellor Angela Merkel briefed the other EU leaders on the state of the Minsk accord.

Merkel told reporters afterwards the leaders had had an “intense discussion” on sanctions.

“There is not enough progress in order to end the sanctions — there was general support for doing anything to push the Minsk process forward,” she said.

The EU-brokered Minsk peace agreement, backed by Moscow and Kyiv, was first reached in late 2014 and then re-worked in early 2015 but is violated almost daily.

“3.5 years of economic sanctions on Russia. And more to come because lack of implementation of Minsk Agreements,” Tusk’s spokesman Preben Aamann wrote on Twitter.

3,5 years of economic sanctions on Russia.
And more to come because lack of implementation of Minsk Agreements.

Refresh your memory on EU's sanctions over the Ukraine crisis here: https://t.co/NjmfApxuLY

Before the downing of MH17, which a Dutch-led investigation said was hit by a Russian-made surface-to-air missile, many EU states, especially France and Germany, had been reluctant to make a move which would cost them as well as Russia.

The war in eastern Ukraine between government forces and rebels backed by Moscow has claimed more than 10,000 lives and rumbles on despite a series of periodic truce deals.

The EU also has sanctions in force against Russia over its 2014 annexation of Crimea from Ukraine.

Thursday’s sanctions extension will be given formal legal approval in the coming weeks.

The Brief: On three big issues, the EU stands united

It was a big surprise to see an institutional crisis unfold this week, with the harsh and undiplomatic reaction of Migration Commissioner Dimitris Avramopoulos to a letter by Council President Donald Tusk. But this glitch aside, one has to praise the leaders of the EU countries for their unity over three other difficult issues.

Ukrainian President Petro Poroshenko said yesterday the EU’s decision to extend economic sanctions on Russia was “an important political decision” on behalf of his country.

“(It is) an important political decision by the leaders of the European Union to continue economic sanctions against Russia for violating Ukraine’s territorial integrity and unwillingness to stop hybrid aggression against our country,” Poroshenko wrote on his official Facebook page.