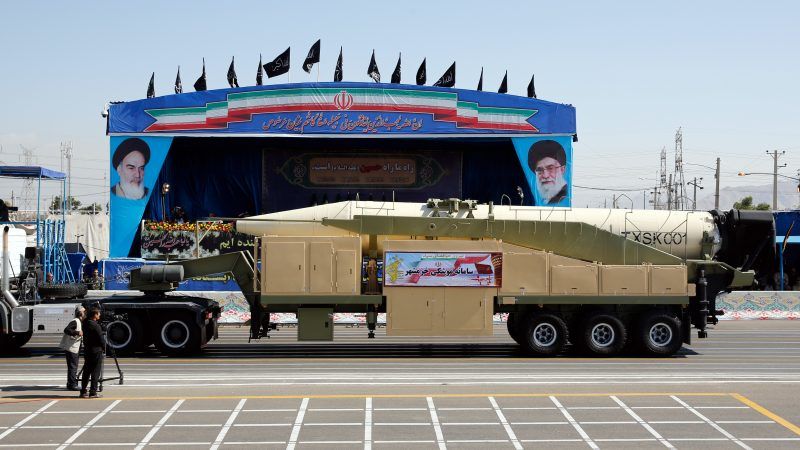 A truck carrying long range missile 'Khoramshahr' during the annual military parade marking the Iraqi invasion in 1980, which led to an eight-year-long war (1980-1988), in Tehran, Iran, 22 September 2018. [Abedin Taherkenareh/EPA/EFE]

The mechanism, a so-called special purpose vehicle (SPV), is designed to circumvent the sanctions, under which Washington can cut off any bank that enables oil transactions with Iran.

The SPV, which could incorporate a barter system, aims to sidestep the US financial system by using an EU intermediary to handle trade with Iran. It could ensure, for example, that Iranian oil bought by Europeans could be paid for with EU goods and services of the same value.

“We’re trying to put the SPV in place before 4 November and are pretty confident we can do it,” one EU diplomat said. “It won’t be operational immediately. It will take time and the time that takes will be months.”

The physical location of a head office and other issues still had to be worked out, the diplomat added.

A second diplomat said everything was in place to have a symbolic start date to show Tehran that the EU was meeting its promises. The bloc’s foreign policy chief, Federica Mogherini, announced the plan at the United Nations General Assembly in New York in September.

However, a third diplomat cautioned that while things were going in the right direction, choosing a location was proving difficult given no European states had volunteered, fearing possible US reprisals.

The entity would at one stage involve national central banks and there was no reason to think the Trump administration would not target them, the diplomat said.

The EU, with support from China and Russia, hopes to keep Tehran in a 2015 nuclear non-proliferation deal by allowing trade to flow despite US penalties.

“We need to demonstrate to the Iranians that we are working to uphold the (nuclear) agreement in the face of US sanctions, to keep them in, but also saying that we can only move so far, so fast,” a fourth diplomat said.

EU diplomats said the SPV would not be enough to preserve all trade. The aim was to convince Iran to keep its commitments under its nuclear agreement with world powers, from which US President Donald Trump withdrew in May.

The SPV will follow several other EU initiatives to try to shield European business with Iran from US sanctions that Trump is reimposing, as he seeks to punish Tehran for what the West says is Iran’s role in the wars in Syria and Yemen.

The EU agrees with Washington that Iran has failed to contain its ballistic missile arsenal and is supporting proxies across the Middle East. But France, Britain and Germany say the 2015 nuclear accord is separate and should be upheld because it prevents Iran from developing a nuclear bomb.