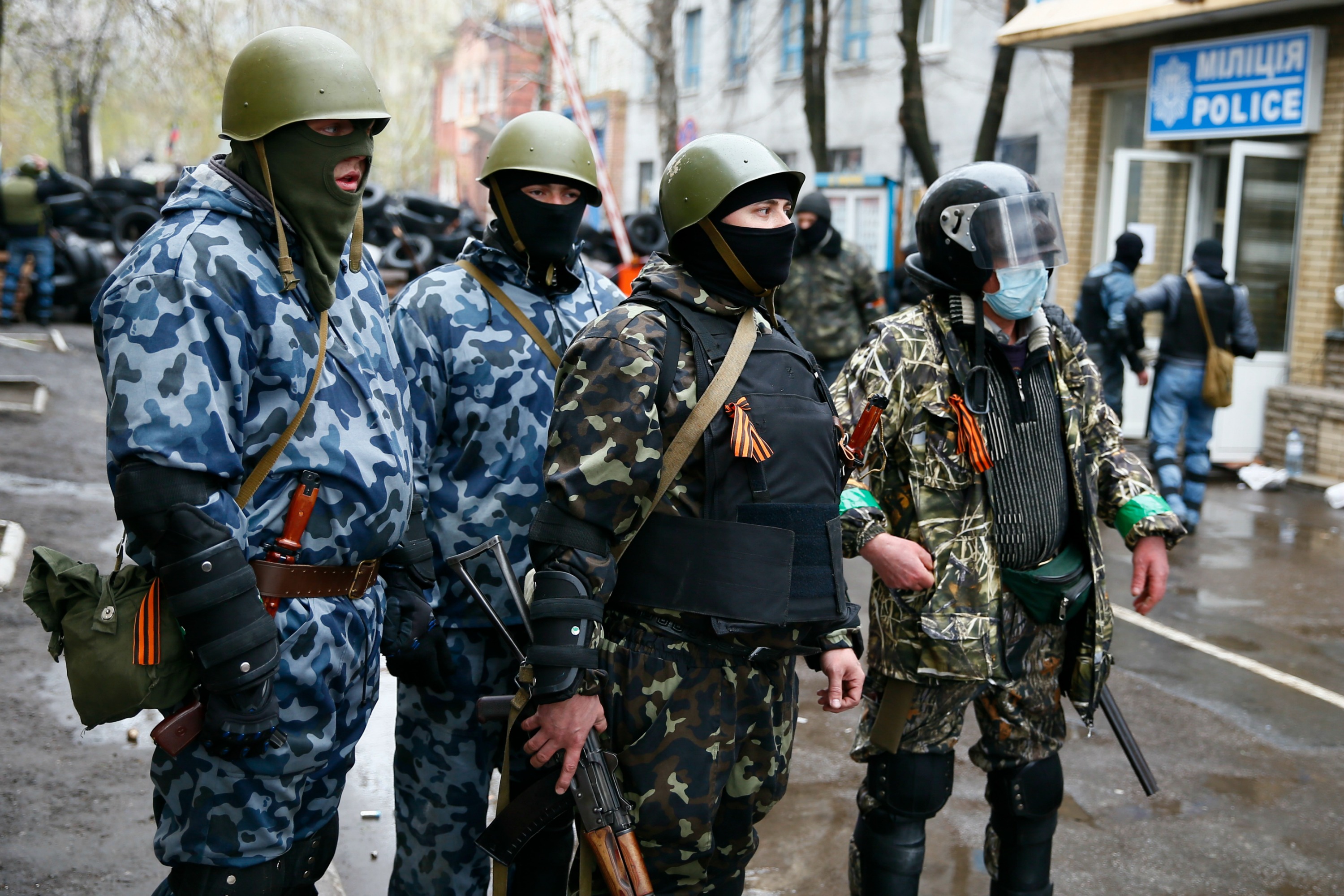 Russia said it was “the west’s responsibility to prevent civil war in Ukraine,” while NATO described the appearance in eastern Ukraine of troops with Russian weapons, and identical uniforms without insignia, as “a concerted campaign of violence by pro-Russian separatists, aiming to destabilise Ukraine as a sovereign state”.

The United States prepared to step up sanctions against Moscow if pro-Russian military actions in eastern Ukraine continue, a senior US envoy said yesterday (13 April). But it is unclear whether new measures will win European support, or slow the Russian-backed separatist revolt. EU foreign affairs ministers are meeting today in Luxembourg.

The next round of US sanctions, which would be the fourth imposed since the Ukraine crisis began, is likely to target Russians close to Putin, as well as Russian entities, three sources familiar with the discussions said on Sunday. However, they will not necessarily target entire Russian business sectors, such as mining, banking and energy, the sources said, adding that the situation was fluid.

Even if the United States were to target swathes of Russian industry, US officials said it was uncertain whether Europe would go along with penalties that would affect Russia’s economy and powerful energy sector.

The sanctions have been the most visible sign of US anger at Russia’s annexation of the Crimea region in southern Ukraine last month, reflecting the deepest plunge in US -Russian relations since the Cold War.

Pro-Russian activists seized government buildings on Saturday in the eastern town of Slaviansk, about 150 km from the Russian border. Ukrainian security forces were trying to oust the activists, who set up barricades on the outskirts of the city.

Ukraine has given pro-Russian separatists a Monday morning deadline to disarm, or face a “full-scale anti-terrorist operation” by its armed forces, raising the risk of a military confrontation with Moscow.

Angered by the death of a state security officer and the wounding of two comrades near the flashpoint eastern city of Slaviansk, acting president Oleksander Turchinov gave rebels occupying state buildings until 0600 GMT to lay down their weapons.

“The National Security and Defence Council has decided to launch a full-scale anti-terrorist operation involving the armed forces of Ukraine,” Turchinov said in an address to the nation.

He blamed Russia, which annexed Ukraine’s Crimea region when Moscow-backed former president Viktor Yanukovich fled after months of pro-Western protests, for being behind the rash of rebellions across Russian-speaking towns in eastern Ukraine.

“We will not allow Russia to repeat the Crimean scenario in the eastern regions of Ukraine,” Turchinov said.

Russia’s foreign ministry called the planned military operation a “criminal order” and said the West should bring its allies in Ukraine’s government under control.

“It is now the West’s responsibility to prevent civil war in Ukraine,” the ministry said in a statement.

The American ambassador to the UN, Samantha Power, said on ABC’s “This Week” that the latest events in Ukraine bore “the telltale signs of Moscow’s involvement.”

“The president has made clear that, depending on Russian behavior, sectoral sanctions in energy, banking, mining could be on the table, and there’s a lot in between,” Power said.

“I think we’ve seen that the sanctions can bite, and if actions like the kind we’ve seen over the last few days continue, you’re going to see a ramping up of those sanctions.”

Power said sanctions already imposed by Washington have had an impact: the Russian rouble has fallen to an all-time low, the country’s stock market has depreciated by 20% and investors are fleeing the country.

But beyond declines in the rouble and Russian indexes, the impact has been modest. Most of those hit by US and EU sanctions are not known to have extensive business interests.

One of those who do is billionaire oil and gas trader Gennady Timchenko. He told Russian television on Saturday his inclusion on the US sanctions list had caused minor problems, mainly because some European banks had become wary of carrying out transactions with any entities linked to him.

But he said, for him personally, being on the list was “quite an honor.”

A new round of US sanctions against Russia is likely to target influential people or firms in its business sectors, such as energy, engineering and financial services, as spelled out in President Barack Obama’s executive order last month.

The US goal is to put more pressure on Russian President Vladimir Putin’s business allies. When sanctions were announced in March, the US Treasury said it would largely focus on people and their personal assets, not businesses they operate.

But US officials, speaking on condition of anonymity, said there was no certainty European nations would be on board with sanctions that would cause real pain and be felt not only in Russia’s economy but by US and European interests too.

Broader sanctions could cause collateral damage to companies that would be forced to sever ties with blacklisted firms and could also affect Russian energy deliveries to western Europe.

It was also unclear whether Thursday’s planned Geneva talks involving the United States, Russia and Ukraine would happen now, the US  officials said, as the Russians had begun setting preconditions, including that Ukraine could not use force to quell unrest in the east, and that all of Ukraine’s regions, including pro-Russian areas, be included in the discussion.

The three sources said the Obama administration had been hesitant to impose the sectoral sanctions but that events over the weekend in eastern Ukraine had clearly tilted the debate in the direction of doing more, rather than less.

European Union foreign ministers are scheduled to meet on Monday to discuss further Ukraine sanctions. One source said the United States would likely hold off on deciding on further sanctions until it sees where the EU consensus emerges.

The three sources familiar with the debate said there were divergences within the European Union, with some advocating sectoral sanctions, others for targeting more individuals and entities, and others preferring to do nothing before Thursday’s meeting of US, Russian, EU and Ukrainian officials in Geneva.

“I don’t think we’ll see tier-three tomorrow, but it’s very difficult to envisage not seeing anything after the events of the weekend,” said another of the three sources, referring to broad sectoral sanctions.

Ukraine now faces a rash of rebellions in the east it says are inspired and directed by the Kremlin.

Asked on ABC if Putin wants to seize eastern Ukraine, Power said his actions “give credence to the idea.”

Though Russians are insisting that is not what Moscow wants, she said. “Everything they’re doing suggests the opposite.”

NATO described the appearance in eastern Ukraine of men with specialized Russian weapons and identical uniforms without insignia, as previously worn by Moscow’s troops when they seized Crimea, as a “a concerted campaign of violence by pro-Russian separatists, aiming to destabilise Ukraine as a sovereign state”.

Power said the rebellion has “all the telltale signs of what we saw in Crimea: It’s professional, it’s coordinated, there’s nothing grassroots-seeming about it. The forces are doing in each of the six or seven cities that they’ve been active in exactly the same thing.”

However, the US officials who spoke on condition of anonymity said Russia’s recent moves appeared to be less about grabbing territory than about destabilizing what Russia sees as an increasingly Western-centric government in Kiev.

The United States on Friday imposed sanctions on a Crimea-based gas company, Chernomorneftegaz, effectively putting it off limits to Russia’s state-controlled Gazprom, which was expected to bid for a stake in the company.

The move, along with penalties on six Crimean separatists and a former Ukrainian official, is the third round of US sanctions since the Ukraine crisis erupted.