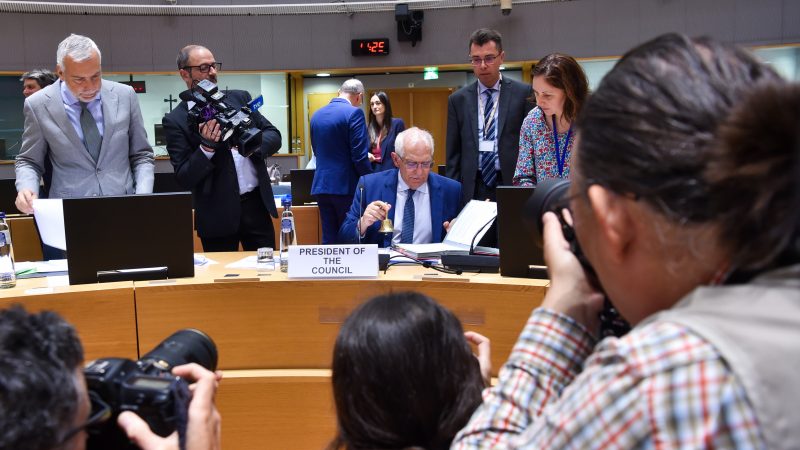 EU foreign ministers sought to publicly pressure Hungary on Monday (16 May) to lift its veto on a proposed oil embargo on Russia, with Lithuania saying the bloc was being “held hostage by one member state”.

The embargo proposed by the European Commission in early May would be the harshest sanction yet after Moscow’s 24 February invasion of Ukraine and includes carve-outs for EU states most dependent on Russian oil.

Germany, the European Union’s biggest economy and a major buyer of Russian energy, said it wanted a deal to authorise the oil embargo which it suggested could last for years.

“I am confident that we will find agreement in the coming days,” German Foreign Minister Annalena Baerbock said as she arrived for a meeting with her counterparts. “We need to prepare it extremely well because it needs to be sustainable.”

But Hungary, Moscow’s closest ally in the EU, has said it wants hundreds of millions of euros from the bloc to mitigate the cost of ditching Russian crude. The EU needs all 27 states to agree to the embargo for it to go ahead.

“The whole union is being held hostage by one member state … we have to agree, we cannot be held hostage,” Lithuanian Foreign Minister Gabrielius Landsbergis said.

Few ministers directly called Hungary out by name as they spoke to reporters, but Romania said it was up to the bloc to bring Budapest round.

‘Oil will be included’

Hungarian Foreign Minister Péter Szijjártó said on his Facebook page on 11 May that there was no solution in sight.

He said the government of Prime Minister Viktor Orbán needed “hundreds of millions of dollars” for Hungarian refineries, a capacity increase for a Croatian pipeline and compensation for the Hungarian economy.

However, EU ministers ranging from Austria to Estonia said there would still be an oil embargo, even if it took longer to come to an agreement.

“This package (of sanctions) will be adopted and oil will be included,” Estonia’s top diplomat, Eva-Maria Liimets, said – a position echoed by others, including Luxembourg and Romania. Spain also supported the Commission’s proposal.

‘Russia is watching us’

Austria expects the EU to agree on the sanctions package in the coming days, Foreign Minister Alexander Schallenberg said.

“I am confident that we will manage to get the sixth sanctions package done in the next days,” Schallenberg told reporters as he arrived for the ministerial meeting.

“It is clear that there still is a certain need for discussion but I believe we should aim to have these discussions where they belong, at the council, in order not give an image of disaccord in public. Russia is watching us.”

An oil embargo, already imposed by the United States and Britain and which would follow five rounds of earlier EU sanctions, is seen as the best way to reduce Russian income for its war in Ukraine.

The EU’s foreign policy chief, Josep Borrell, last week signalled that Monday’s meeting might have been the moment for a breakthrough. On Monday he said he was doing his utmost to unblock the situation.

Some diplomats now point to a 30-31 May summit as the moment for agreement on a phased ban on Russian oil, probably over six months, with a longer transition period for Hungary, Slovakia and the Czech Republic.

Moscow calls its invasion of Ukraine a “special military operation” to rid the country of fascists, an assertion Kyiv and its Western allies say is a baseless pretext for an unprovoked war.