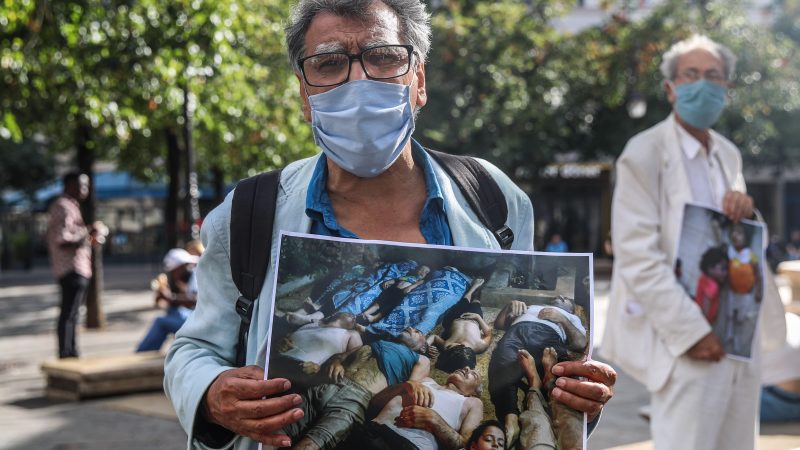 Syrians and French people demonstrate while carrying printed pictures for killed people the Chemical Attack on Ghota on 21 August 2013, at Fontaine des Innocents in the Les Halles district in the 1st arrondissement of Paris, France. 21 August 2020. [Mohammed Badra/EPA/EFE]

EU foreign ministers insisted Wednesday (31 March) that they would demand “accountability” from Syria’s government as well as jihadist and other armed groups over alleged war crimes committed since the 2011 uprising that plunged the nation into civil war.

“Our countries are committed to ensuring that war criminals and torturers will not go unpunished,” the 18 ministers said in a joint statement published on the website of the French foreign ministry.

In the past 10 years nearly 400,000 people have been killed and more than six million have been forced to flee the country to escape “countless violations of human rights,” the ministers said.

President Bashar al-Assad, who is backed by Russia, has also been accused of using chemical weapons in breach of international law as he reconquered control of the country.

“Full light must be shed on this decade of atrocities,” the ministers said.

“We continue to call for the International Criminal Court to be allowed to investigate crimes alleged to be committed in Syria and prosecute the perpetrators.”

Cases have already been filed in several European countries on the principle of universal jurisdiction, which allows suspects to be tried outside the territory of where the crimes were committed.

A German court in February convicted a former Syrian intelligence service agent for complicity in crimes against humanity, in the first such court case worldwide.

The statement comes after international donors on Tuesday pledged $6.4 billion in aid for Syria and the thousands of refugees in neighbouring countries, missing the $10 billion target urged by the UN.

The need for aid has increased on the back of the coronavirus pandemic and a slump in the value of the Syrian pound, which has sent food prices soaring.

Efforts have stalled to find a lasting peace deal to end a conflict that has pitched world powers against each other and fuelled the rise of the Islamic State group.

European countries insist they will not spend money on a broader rebuilding in Syria until Assad commits to a genuine political process to resolve the conflict.