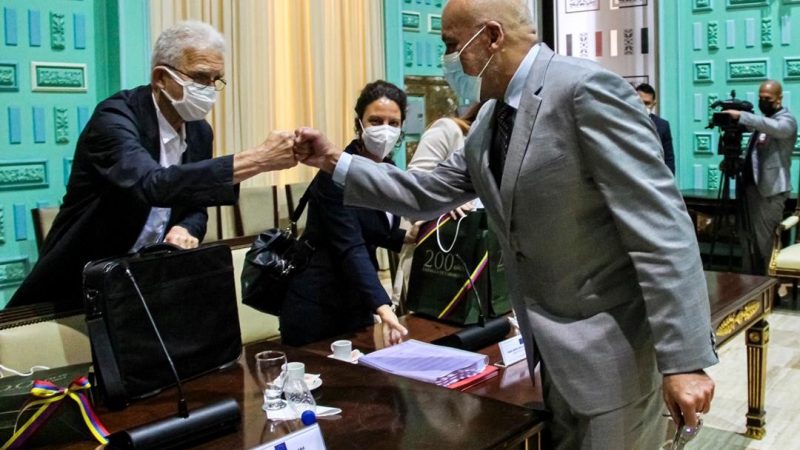 A handout photograph made available by the press office of the Presidency of the National Assembly of Venezuela, shows President of the organization, Jorge Rodriguez (R), as he takes part in a meeting with members of the technical mission of the European Union in Caracas, Venezuela, on 9 July 2021. [Handout photo/EPA/EFE]

European Union election experts met on Wednesday (13 July) with Venezuela’s defense minister and Supreme Court president, at a time when the opposition is demanding the release of a top leader accused of terrorism and treason.

The EU representatives arrived in Venezuela a week ago to study the possibility of sending a mission to observe mayoral and gubernatorial elections in November, following an invitation from President Nicolás Maduro.

“Enjoyable meeting with the European Union’s Electoral Exploratory Mission, on the eve of the next mega-elections that will take place in Venezuela,” Defense Minister Vladimir Padrino tweeted.

“We reiterated our democratic calling and the fundamental role the (armed forces) play in guaranteeing peace.”

Venezuela’s armed forces are the main authority backing Maduro’s continued hold on power, despite pressure from the opposition and international sanctions. 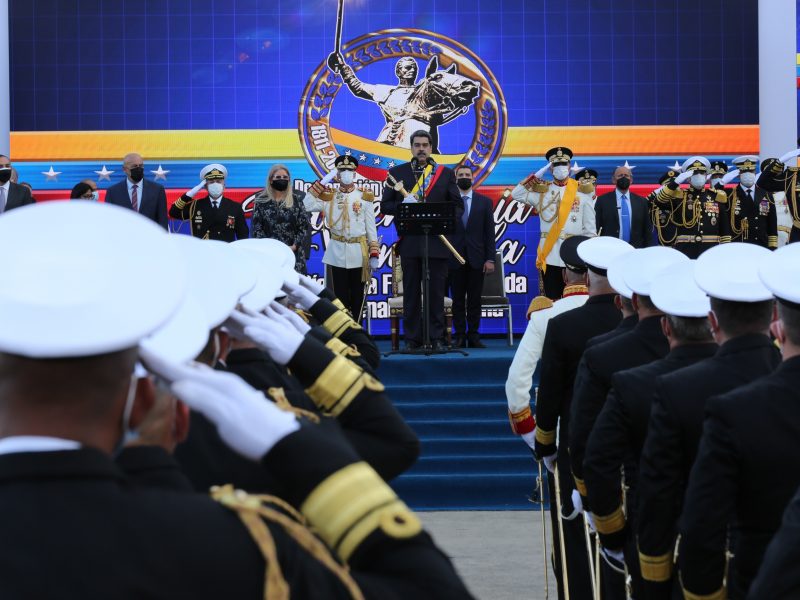 For Venezuelan President Nicolás Maduro, the voting in November’s regional elections is a second-tier priority as the government looks to make concessions to receive international sanctions relief.

Earlier, the EU delegation met with the Supreme Court leadership.

“Our goal is peace and respect for the will of the people,” said court president Maikel Moreno in a statement released by the body, which is dominated by Maduro loyalists.

The EU has not responded to AFP requests for comment on the meetings.

It is not known whether the arrest on Monday of opposition figure Freddy Guevara, part of an opposition group that met with the EU delegation last week, was discussed.

Guevara, a 35-year-old former student leader, posted on social media from inside his car as he was being intercepted by intelligence agents on a Caracas highway.

He is a close ally of opposition leader Juan Guaidó, recognized by the United States and several other nations as Venezuela’s leader.

Guevara’s arrest came despite plans for the opposition to sit down with the government for stalled peace talks to end the country’s political crisis.

Maduro said on Monday those talks, to be held in Mexico, would only go ahead if international sanctions are lifted and he is protected from any plots to oust him.

Most European and Latin American nations, along with the United States, consider Maduro to be illegitimate after wide reports of irregularities in his 2018 election.

The EU deems 2015 legislative elections, in which the opposition took control of the legislature, to be the last “free expression by Venezuelans in an electoral process.”

The opposition lost control of the assembly last year after boycotting an election it said would be neither free nor fair.