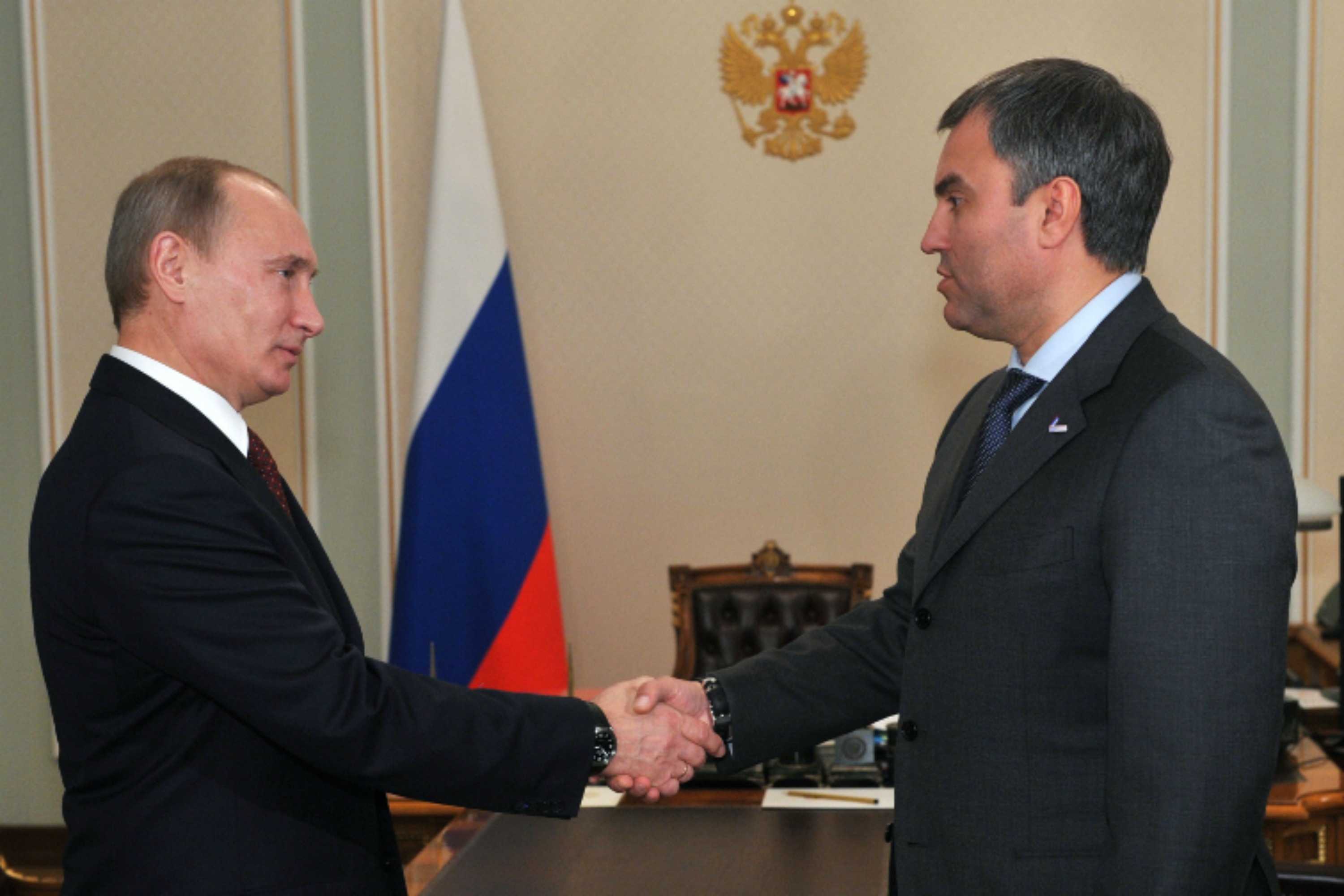 The EU imposed sanctions yesterday (12 May) on a top aide to Russian President Vladimir Putin and the commander of Russian paratroopers, as well as two confiscated Crimean energy companies, raising pressure on Moscow over its actions in Ukraine. EU ministers also discussed the “triggers” for the next stage of sanctions, which would hit business.

Putin’s first deputy chief of staff, Vyacheslav Volodin, and Vladimir Shamanov, the commander of Russian airborne troops that took part in Russia’s occupation of Ukraine’s Crimea region in March, were among 13 people added to the EU’s sanctions list.

Volodin, a wealthy former lawyer and veteran political strategist, is already on the US sanctions list.

The latest additions bring to 61 the number of Russians and Ukrainians the EU has targeted with asset freezes and visa bans. The Ukrainian press reported that the new sanctions are not yet part of the “phase three”, which is due to include economic sanctions.

For the first time, the EU’s latest sanctions list included two companies, after EU foreign ministers agreed on Monday to broaden the scope of sanctions, making it easier to freeze the assets of firms involved in the Ukraine crisis.

The companies are a Crimea-based gas company, Chernomorneftegaz, and a Crimean oil supplier, Feodosia.

The EU said both companies had been effectively confiscated by the new authorities in Crimea following the Russian takeover.

The United States had already imposed sanctions on Chernomorneftegaz on 11 April, effectively making it off limits to Russia’s state-controlled energy giant Gazprom, which was expected to bid for a stake in the company.

US officials said at the time that Washington’s move aimed to make it impossible for Gazprom to have dealings with Chernomorneftegaz.

For now, EU sanctions are limited to firms or other organisations linked to Russia’s annexation of Crimea. The EU will not target high-profile firms such as Gazprom.

Also on the EU’s new list of individuals facing asset freezes and visa bans were several pro-Russian separatist leaders in eastern Ukraine, including Vyacheslav Ponomaryov, the rebel mayor of Slaviansk, who said earlier on Monday that his eastern region needed Russian troops to provide stability.

Other persons targeted include Roman Lyagin, head of the electoral commission in Donetsk region, and Alexander Malykhin, head of a local election committee in Luhansk. Both were involved in organising self-rule referendums in their areas on Sunday that the EU has called illegal.

Russia criticised the EU for expanding sanctions over the Ukraine crisis, and urged it to respect self-rule votes in two eastern Ukrainian provinces.

‘EU undermines trust in itself as a partner’

“By continuing its faulty, anti-Russian sanctions logic, the European Union undermines trust in itself as a partner and casts doubt on its claim to an objective role in supporting a resolution of Ukraine’s internal conflict,” the Foreign Ministry said in a statement.

Even after the latest additions, the EU sanctions are less far-reaching than those imposed by the United States.

The EU’s reticence to go further and impose tough economic sanctions on Russia over its support for separatist groups in Ukraine reflects concerns among many of its member states about trade and industrial ties and heavy reliance on Russian energy.

Underscoring such concerns, diplomatic sources said France planned to press ahead with a €1.2 billion contract to sell Mistral helicopter carriers to Russia because scrapping it would do more damage to France than to Russia.

EU foreign ministers meeting in Brussels on Monday did, however, discuss possible triggers for tougher sanctions, with big EU powers Germany, France and Britain all suggesting that Russia must be punished if it undermined Ukraine’s presidential election on 25 May.

A joint statement after the meeting said the EU would “pay particular attention to all parties’ attitude and behaviour towards the holding of free and fair presidential elections when deciding about possible future measures”.

The ministers also held talks with Didier Burkhalter, head of the Organisation for Security and Cooperation in Europe, who has drawn up a peace plan for Ukraine.

Several ministers denounced the independence referendums held in parts of eastern Ukraine on Sunday as illegal.

“These do not have credibility or international acceptance or recognition. I think the votes in the Eurovision song contest really were more credible,” British Foreign Secretary William Hague told reporters.

Despite Hague’s joke, the separatist region of Donetsk appealed to Moscow on Monday to consider its absorption into the Russian Federation [read more].

The EU ministers said they backed “a swift convening” of another ministerial meeting between Ukraine, Russia, the United States and EU to ensure an April agreement aimed at defusing the Ukraine crisis was fully implemented.

Ministers also asked EU officials to draw up plans for a possible EU mission to advise Ukraine on rebuilding its police and legal system. Britain, Poland and Sweden have proposed sending hundreds of judicial and police advisers to Ukraine.

German Foreign Minister Frank-Walter Steinmeier said he would travel to Kiev today (13 May) and possibly to eastern and southern Ukraine to try to convince people there that building bridges between different sides was the only solution.

“We have to be prepared for what to do if someone prevents the elections on 25 May. It that is going to happen […] then we have to think about further sanctions,” he said.

“We should not yearn for economic sanctions, as they would not only hit Russia but also definitely hit us … If we went a step further with our sanctions with every provocation, we would already have war,” he said.

Some EU governments fear that trade sanctions against Russia could undermine their own economies, just recovering from the financial crisis, and provoke Russian retaliation. Among those most reluctant to intensify sanctions are Italy, Greece, Cyprus, Bulgaria, Luxembourg and Spain.

Council President Herman Van Rompuy visited Kyiv yesterday. The Ukrainian press quotes Van Rompuy saying that the EU does not recognize the “so-called referendums” which he called “illegal, illegitimate, and not credible,” as well as the annexation of Crimea.

He also said the EU was prepared to take “additional, far-reaching steps” if Russia failed to take steps that help resolve the conflict.

“Further steps by Russia to destabilise the situation in Ukraine will bring additional far-reaching consequences with respect to a wide range of players in the economic sphere. Preparatory work in this respect is ongoing,” Van Rompuy said.

Asked about the agenda of the visit of Ukrainian Prime minister Arseny Yatsenyuk, who will meet with Commission President José Manuel Barroso in Brussels today, Commission spokesperson Pia Ahrenkilde Hansen listed a long range of issues including the signature of a memorandum on the release of €1 billion of macro-financial assistance.

Another issue to be discussed she said was the preparation of a new trilateral meeting involving the EU, Ukraine and Russia “at political level” to discuss gas supplies to Ukraine and gas transit through the country to the EU. A first such meeting held on 2 May produced no concrete results [read more].

Speaking to a public event organised by Carnegie Europe on 12 May, Polish Foreign Minister Rados?aw Sikorski said that it was time for Europeans to get serious about their own security and that Russian President Vladimir Putin’s actions in Ukraine had “given NATO a new lease of life.”

“NATO needs to get back to basics,” he argued. “We were in the business of handing out security guarantees like insurance policies in the confidence that they would not be called upon. We can now be sure that security guarantees that are not made credible will be tested.”

Sikorski said the EU had radically overestimated its soft power and economic attractiveness to its neighbours.

“We thought we could still go on in that old-fashioned way of negotiating for years these free trade agreements, irrespective of political developments in the countries concerned, irrespective of the actions of third parties impacting on the result,” he explained. “This is far too timid and far too slow.”

Sikorski said that since the Ukraine crisis began, and especially since the annexation of Crimea, he sensed a new era emerging in Europe with regard to relations with Russia, “because whereas [before] you could treat the Chechen wars and the Georgia war as exceptions, now it’s a trend.”

On Western sanctions against Russia, Sikorski said the EU “could do more that is intelligent, useful, and effective within stage two,” noting that third-stage measures would have to be conceived with caution. “We have to be very careful not to hurt ourselves more than the other side.”