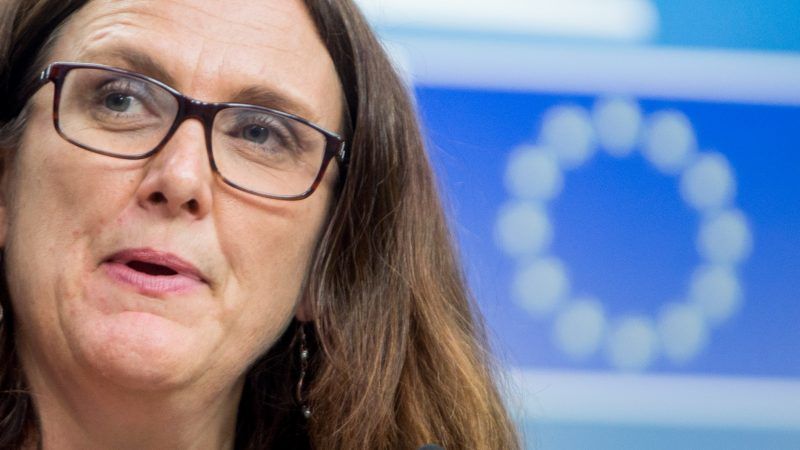 European Commissioner for Trade Cecilia Malmström gives a press conference at the end of a European foreign affairs council on trade in Brussels, Belgium, 22 May 2018. [Stephanie Lecocq/EPA/EFE]

“We hope that it doesn’t come to that and that we can a solution. If not, the EU Commission is preparing a rather long list of many American goods. It would be around $20 billion,” she said.

Any new European tariffs will not be directed at specific American states, she said. “No, now it’s more general goods such as agricultural products, machinery, high-tech products and other things,” she said.

She said that she didn’t think US Treasury Secretary Steven Mnuchin’s proposal to drop tariffs, non-tariff trade barriers and subsidies was serious, pointing out that the US has laws and subsidies protecting American industries.

“We tried earlier in TTIP negotiations to make the United States loosen those laws. It was completely impossible. They did not move a millimetre,” Malmström told Dagens Nyheter.

Malmström is part of EU delegation in Washington for talks today on a long-term trade deal. Commission President Jean-Claude Juncker is scheduled to meet Trump in a last-ditch effort to convince him to hold off imposing punitive tariffs on European auto exports to the US.

“Basically, I’m an optimistic person, but heading in to this I’m moderately optimistic. But one must always try,” Malmström said.

Juncker dampened expectations just ahead of his talks with Trump.

“I am not very optimistic. I know Mr Trump pretty well. I have met him frequently and know how to deal with him and know how he deals with others. We will negotiate as equals,” Juncker told German public broadcaster ZDF.

Juncker said that the EU is “not in the dock — we don’t need to defend ourselves.

“We are here to explain ourselves and explore ways to avoid a trade war,” he said.

Juncker renewed his pledge of retaliatory measures should Trump make good on his threat to slap new tariffs on EU car imports.

“We are in a position to respond appropriately right away.”