Netanyahu said the controversial announcement by US President Donald Trump – which prompted diplomatic alarm and street protests across the Islamic world – had “put facts squarely on the table”.

As he arrived for talks in Brussels, Netanyahu said he expected “all or most” European countries would follow the US – but the 28-nation bloc’s foreign policy head Federica Mogherini gave him a stern rebuff, telling him to “keep his expectations for others”. 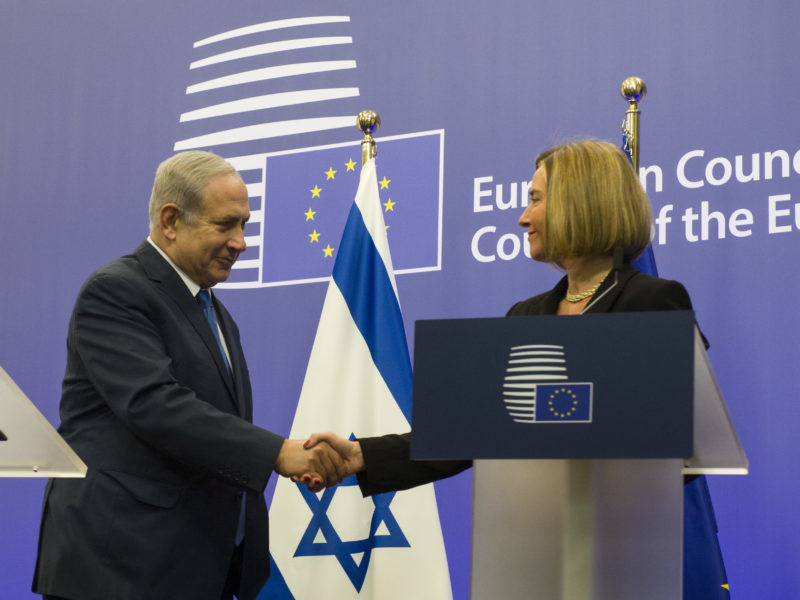 The EU expressed alarm last week at the US decision, but Netanyahu said Trump had simply stated facts by acknowledging that Jerusalem had been the capital of the Israeli state for 70 years and of the Jewish people for 3,000 years.

“It doesn’t obviate peace, it makes peace possible, because recognising reality is the substance of peace, it’s the foundation of peace,” Netanyahu said in a statement alongside Mogherini ahead of a breakfast meeting with EU foreign ministers.

“I believe that all or most of the European countries will move their embassies to Jerusalem, recognise Jerusalem as Israel’s capital, and engage robustly with us for security, prosperity and peace,” Netanyahu said.

The Jerusalem decision upended decades of US diplomacy and broke with international consensus. Mogherini last week warned it could take the situation “backwards to even darker times”.

After nearly two hours of talks between Netanyahu and the EU ministers, Mogherini gave a flat rejection of his suggestion they could follow Trump.

“He can keep his expectations for others, because from the European Union member states’ side this move will not come,” she said, adding that the bloc – the Palestinians’ largest donor – would stick to the “international consensus” on Jerusalem.

"PM Netanyahu realised there is full EU unity: only realistic solution is based on two states, with #Jerusalem as capital. We want to continue to work with the Quartet with US, Russia and UN and to enlarge this forum" @FedericaMog pic.twitter.com/8AGjMBNBaE

She reiterated the EU’s stance that “the only realistic solution” for peace is two states – Israel and Palestine – with Jerusalem as the capital of both and the borders returned to their status before the 1967 Arab-Israeli War.

And she pledged to step up efforts with the two sides and regional partners including Jordan and Egypt to relaunch the peace process.

Both Israelis and Palestinians claim Jerusalem as their capital and previous peace plans have stumbled over debates on whether and how to divide sovereignty or oversee holy sites.

Mogherini also condemned attacks on Israel – after Netanyahu took aim over the weekend at what he called Europe’s “hypocrisy” for criticising Trump’s statement, but not “the rockets fired at Israel or the terrible incitement against it”.

“Let me condemn in the strongest possible way all attacks on Jews everywhere in the world, including in Europe, and on Israel and on Israeli citizens,” Mogherini said.

Netanyahu pointed to a new US peace initiative as a possible way forward.

“There is now an effort under way to bring forward a new peace proposal by the American administration. I think we should give peace a chance. I think we should see what is presented and see if we can advance this peace,” he said.

Trump’s son-in-law and senior adviser, Jared Kushner, has been working with a small team to develop a new US proposal to revive peace talks between Israel and the Palestinians, but it is not clear what progress he is making.

Mogherini indicated that US efforts appeared to be at a very early stage, saying “both horizon and framework” – the end goal and how to get there – had still not be clearly defined.

And she warned Washington to have no illusions “that a United States initiative alone would be successful”, saying regional and international support would be essential to peace talks.

Most EU members, including the bloc’s biggest countries, have expressed alarm over the Trump administration’s policy shift.

But the 28-member bloc is not unified on the issue – Hungary, Greece, Lithuania and the Czech Republic in particular favour warmer ties with Israel.

And last week Hungary broke ranks to block a joint statement from the EU that was critical of Washington’s Jerusalem shift.

Trump’s announcement on Wednesday has been followed by days of protests and clashes in the Palestinian territories.

Four Palestinians were killed either in clashes or from Israeli air strikes in retaliation for rockets fired from the Gaza Strip. A fifth day of demonstrations was expected on Monday.

Today on my blog: #Jerusalem, a capital for two States https://t.co/ixlRLenZVa pic.twitter.com/XoGJCyOE6c