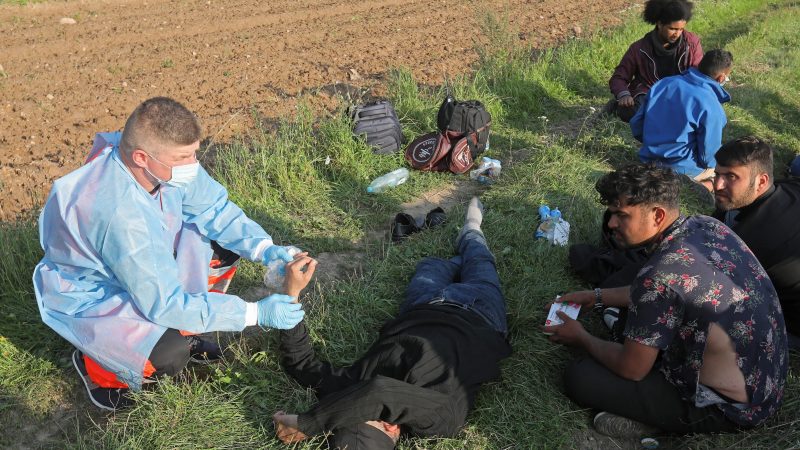 Ambulance rescuers assist members of a group of refugees found on the Polish-Belarusian border near the town of Usnarz Górny, north-west Poland, 22 August 2021. [EPA-EFE/Artur Reszko]

The group has been stuck on the EU’s eastern frontier for two weeks with Polish forces preventing them from entering to make asylum claims.

Thousands of migrants — mostly from the Middle East — have crossed the border from Belarus into the eastern EU states of Latvia, Lithuania and Poland in recent months.

Brussels believes the regime in Minsk has deliberately engineered the influx in retaliation against EU sanctions — an accusation that Belarus denies.

Poland has called it a “hybrid attack” on the bloc and has ruled out allowing them entry, saying they are still in Belarus and it should intervene.

In a joint statement, the prime ministers of Estonia, Latvia, Lithuania, and Poland said that the influx of migrants had been "planned and systematically organized" by Alyaksandr Lukashenka’s regime.https://t.co/gMt6Psuz8U

The Strasbourg-based court, whose judgements are binding, demanded that Polish and Latvian authorities “supply all those who ask with food, water, clothing, adequate medical care and if possible temporary shelter” until 15 September.

The judges specified that neither country was being told to let the group of migrants in.

Forty-one Iraqi Kurds and 32 Afghans sought the court’s help to enter either Latvia or Poland and ask for international protection, a court statement said.

"The Afghans are camping out in the open, with hardly any protection from the heavy rain. There are no toilets. The refugees are sitting between Polish & Belarusian guards who are stopping them from going anywhere."https://t.co/CFQSpnZiCH

A 52-year-old Afghan woman stuck in a makeshift migrant camp on the border between Belarus and Poland risks dying without urgent help, a charity helping the migrants told AFP on Wednesday.

The group of some 30 migrants has been stuck on the EU’s eastern frontier for more than two weeks, with Polish border guards and soldiers preventing them from entering to make asylum claims.

“We are concerned for the life of a 52-year-old woman,” said Kalina Czarnog from the Ocalenie (Salvation) foundation.

The foundation said the woman has respiratory and renal problems and a total of 12 migrants are now seriously ill.

“They do not have drinking water. They have had nothing to eat since yesterday,” the foundation, whose representatives have been communicating with the migrants through megaphones since Polish soldiers are preventing them access, said on Twitter.

The Council of Europe’s human rights commissioner Dunja Mijatovic on Wednesday joined calls for Poland to take in the migrants, a day after the UN refugee agency made a similar plea.

Poland is not alone in facing these difficult issues. Yesterday, I published my letter to the Lithuanian government setting out my concerns in detail. Many of these concerns also apply to the situation faced by Poland and other Council of Europe member states. https://t.co/cbBefMbw9Q

The Polish government has announced plans to build a high barbed wire fence along a third of its border to prevent further arrivals.