EU should prepare for ‘further downturn’ of relations with Moscow, says Borrell 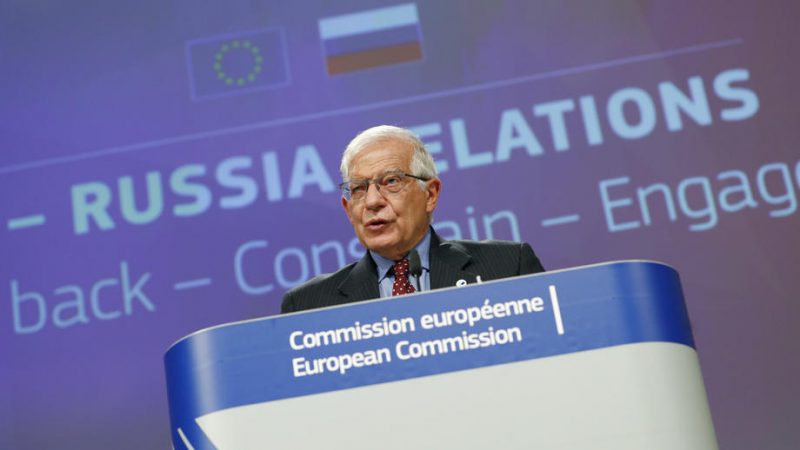 The unveiling of the EU’s strategy on Russia came after US President Joe Biden’s consultation with European allies earlier this week and as he sat down with Russia’s President Vladimir Putin for a hotly anticipated meeting in Switzerland.

According to the 14-page paper, to be discussed by EU leaders during their summit next week, Moscow is a “key strategic challenge” because it seeks to interfere in and destabilise member states as well as neighbouring countries.
Brussels’ approach should be to “push back, constrain and engage with” Moscow, Borrell said.

Ties with Moscow hit rock bottom after the EU imposed sanctions over the arrest of Kremlin critic Alexei Navalny and the Russian authorities hit back by targeting officials in Brussels, alongside accusations by the Czech Republic that Russia’s military intelligence was responsible for two explosions at a weapons dump in 2014.

Wednesday’s report is intended to buy time until the EU summit on 24-25 June, when a comprehensive approach towards Moscow could be presented, though leaders say it will be difficult to agree on a joint position between the EU27.

In May, EU leaders tasked Borrell with preparing a report on Russia, similar to the one presented in March on Turkey, which spelt out in more detail potential steps towards Ankara if ties were to worsen, including sanctions.

Borrell said that “the deliberate policy choices of the Russian government over the last years have created a negative spiral in our relations” and warned that the EU “needs to be realistic and prepare for a further downturn of our relations with Russia, which are right now at the lowest level.”

“This further downturn is the most likely outlook for the time being,” he added.

In addition to that, the EU intends to “push back” against “human rights violations,” and “consistent breaches of international law in Ukraine, Georgia and elsewhere.”

For this, the Commission intends to “constrain” Russia’s “attempts to undermine EU interests” and proposed for the bloc to become “more robust and resilient” and to strengthen its “counter-hybrid toolbox” in order to respond to malign actions “more systematically and in a joined-up way”.

This would also include closer coordination with like-minded partners such as NATO and the G7, as well as with Eastern partners – Armenia, Azerbaijan, Belarus, Georgia, Moldova, and Ukraine – through EU Association Agreements, other trade treaties and continued “important financial support”.

The strategy paper stresses that the EU “firmly rejects the Russian pursuit of a privileged sphere of influence” over those neighbouring countries.

At the same time, the EU intends to “engage Russia” on several “key challenges,” including climate change, combating the pandemic and public health.

“Time and again, the EU has demonstrated unity despite attempts by Russia to divide us,” Borrell said. “This unity remains our biggest asset and needs to be even more robust.”

The EU’s efforts to counter Moscow’s assertiveness have, however, in recent years had been hampered by Germany’s insistence on sticking to the controversial Nord Stream 2 gas pipeline across the Baltic Sea.

The pipeline would bypass Ukraine, potentially depriving it of lucrative transit revenues at a time when Kyiv is locked in a confrontation with Moscow though the Kremlin says it would continue to use Ukraine as a gas transit country.

Asked about Nord Stream 2 and whether it was time to abandon the pipeline project, Borrell underlined that the project “was not launched by the EU.”

“Nord Stream 2 is not an European Union project. It is not being funded by the European Union. It is a German project,” Borrell told reporters.

Instead, he flagged the “advantage provided by our energy transition”.

“What is clear that if we do apply what we said we are going to apply in the area of climate and energy then consumption of hydrocarbons is going to go down significantly” including oil and gas, Borrell said.

One response to “EU should prepare for ‘further downturn’ of relations with Moscow, says Borrell”