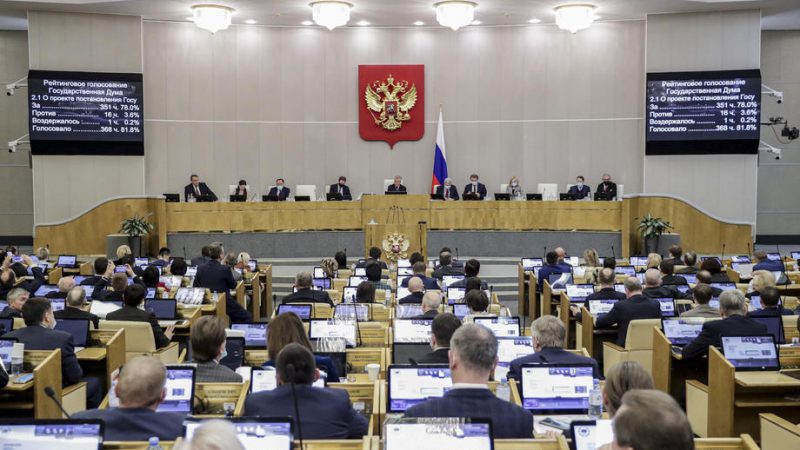 A handout photo made available by the press service of the Russian State Duma shows the plenary session of the State Duma (Russia's lower house of parliament) during election for the draft resolution 'On the appeal of the State Duma' to the President of the Russian Federation Vladimir Putin on the need to recognise the Donetsk People's Republic and the Lugansk People's Republic in Moscow, Russia, 15 February 2022. Russian deputies supported the resolution on the appeal to the Vladimir Putin on the need to recognise the DPR and LPR. [Handout photo/EPA/EFE]

The EU on Tuesday (15 February) condemned a bid by Russian lawmakers to have President Vladimir Putin recognise separatist regions in Ukraine as independent, saying it would violate the Minsk agreements Moscow had signed up to.

“This recognition would be a clear violation of the Minsk agreements,” he said.

The EU strongly condemns the Russian State Duma’s decision to submit a call to President Putin to recognise the non-government controlled areas of Donetsk and Luhansk oblasts of Ukraine as independent entities. This recognition would be a clear violation of the Minsk agreements.

Those agreements are contained in Western-backed protocols signed in 2014 and 2015 that aimed to end the conflict in the Donbas region in eastern Ukraine, where Russian-backed separatists rule two self-styled “republics” with no international recognition.

Russia’s parliament lower house earlier Tuesday urged Putin to recognise those regions as independent, arguing that it was Kyiv that was not following the Minsk agreements.

“If that happens, that will be a blatant violation of Ukraine’s territorial integrity and sovereignty once again,” Stoltenberg told journalists.

“There is no doubt that Donetsk and Luhansk is part of Ukraine within internationally recognised borders. So such a recognition will be a violation of international law.”

France’s foreign minister said on Tuesday that if Moscow recognised two Russian-backed breakaway regions in eastern Ukraine as independent it would be an “attack without weapons”.

“If this were applied then it would be an impossible situation and would be a sort of attack without weapons. It would be in violation of Ukraine’s sovereignty,” Foreign Minister Jean-Yves Le Drian told a parliamentary hearing.

France, alongside Germany, Russia and Ukraine, form the so-called Normandy group, which was created to end the conflict in eastern Ukraine.

The conflict is part of a wider crisis, with the United States warning that Russia may attack Ukraine at any time with a force of more than 100,000 troops massed near its borders. Russia denies any such plan and accuses the West of hysteria.

The Kremlin said on Tuesday some of its troops were returning to base after exercises near Ukraine and it mocked Western warnings about a looming invasion, but NATO and the United States said they had yet to see any evidence of a de-escalation that could avert war. 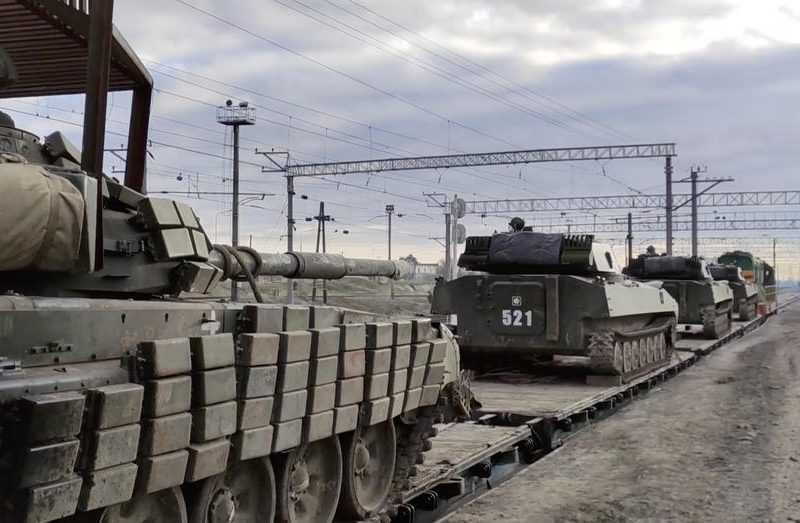 Some troops in Russia’s military districts adjacent to Ukraine are returning to their bases after completing drills, Russia’s defence ministry said on Tuesday (15 February), a move that could de-escalate frictions between Moscow and the West.