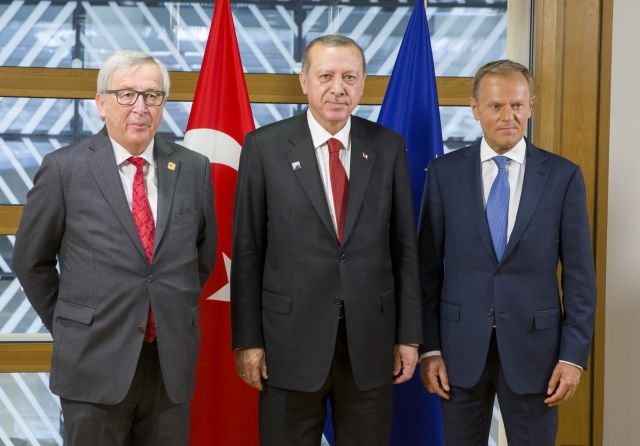 The EU has expressed concern over the sacking and jailing of tens of thousands of soldiers, police, teachers and civil servants since a failed military coup last July. It has also criticized a revamping of Turkey’s constitution – backed by a referendum – that greatly expands Erdogan’s powers.

We discussed the need to cooperate . I put the question of human rights in the centre of our discussions with @RT_Erdogan. pic.twitter.com/HECdxEcS3P

Turkey, for its part, has accused the EU of dragging its feet over the country’s bid to join the bloc. Talks are now effectively frozen and Erdogan has suggested Ankara might walk away from the EU.

“We discussed the need to cooperate. I put the question of human rights in the center of our discussions with Erdogan,” European Council chief Donald Tusk wrote in a tweet following the meeting but gave no further details.

Erdogan posed for photos with Tusk and European Commission president Jean-Claude Juncker but the atmosphere was frosty and they exchanged no words in public, in contrast to the impromptu conversation the EU officials struck up with Donald Trump earlier in the day.

Erdogan, who also made no comment after his meeting with Tusk and Juncker, was due to attend a meeting of NATO heads of state and government later on Thursday.