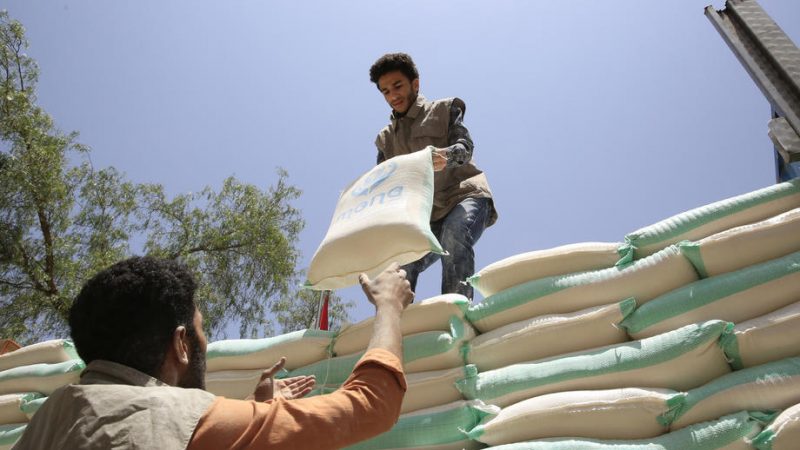 File photo. Aid workers unload a truck with emergency food rations for war-affected people amid a food insecurity, in Sana'a, Yemen, 26 April 2022. Yemen is currently experiencing a food insecurity due to the prolonged conflict and the resultant economic crisis as well as the impact of the Russian invasion of Ukraine as the war-ravaged Arab country imports almost 90%of its overall food supply, including over 30% of wheat from Ukraine and at least 8% from Russia. [EPA-EFE/YAHYA ARHAB]

Africa and the Middle East are at risk to be severely affected by Ukraine’s inability to ship its massive grain harvests out of the Black Sea.

Russia’s President Vladimir Putin has repeatedly accused the West of being responsible for disrupting the global supply chains.

“Our sanctions don’t affect the exports of food and fertilisers from Russia,” a senior EU official stressed, referring to issues raised by Macky Sall, President of Senegal and Chair of the African Union, in his address to EU leaders at their summit on Tuesday (31 May).

According to a senior EU official, there would be a certain reluctance of international shipowners to send their vessels to Russian harbours to pick up grain and fertilisers.

“There’s nothing that prevents it, there should be no reputational considerations, there will be no collateral effects – it’s possible and doable, and we are not against it,” he said.

EU leaders had appealed to African countries not to fall for a Russia-led propaganda campaign that portrayed the current global food insecurity as the result of Western sanctions against Moscow.

The EU and the African Union agreed on a united message on food security which places the blame for disruptions to food supply squarely on Russian President Vladimir Putin’s shoulders. 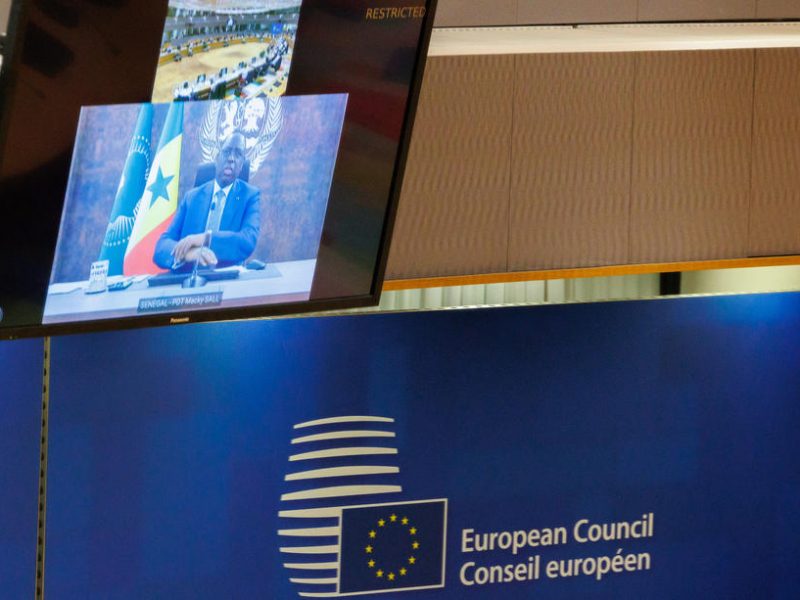 The EU and the African Union have agreed on a united message on food security which places the blame for disruptions to food supply squarely on Russian President Vladimir Putin’s shoulders amid warnings of a “catastrophic” famine.

“It’s a complete misinformation from Russia’s side, the only reason why we are struggling now with a food crisis is because of this brutal, unjustified war against Ukraine,” European Commission President Ursula von der Leyen told reporters.

“I want to be very clear, we have no sanctions on food and agricultural products, no sanctions on that,” she added, noting that the export of Russian fertilisers to non-EU countries is not affected by Brussels’ sanctions.

But beyond the food issue, Sall had also raised the problem of payments for food supplies, which are hindered by the exclusion of some Russian banks from the SWIFT international payment system.

And he is by far not the only one as EU officials point towards such narratives being present also beyond the EU’s near neighbourhood.

Russia builds on the food crisis it has engineered to strengthen relations in Asia, Africa and Latin America. Among other things, Moscow conveys the message to developing countries in need of grain that “Russia’s friends will not be left behind”.

Experts believe a key reason why some pro-Russia disinformation narratives about the war in Ukraine have found resonance, especially in Southeast Asia is that they have successfully tapped into already existent anti-US and anti-West sentiments.

EU officials have called for a more proactive approach to disinformation and propaganda, but so far the bloc had too few resources to deal with the matter.

Especially since Russia’s invasion of Ukraine, criticism has emerged that the East StratCom Task Force, part of the EU’s diplomatic service, has been underfunded and undersupported and should be more ambitious in the future.

“We’re not fighting enough in the fight, we are not belligerent on the field of ideas,” the EU senior diplomat said.

EU’s chief diplomat Josep Borrell is set to travel to the Middle East and South-East Asia in the next ten days, with the issue likely to feature on his agenda when he meets his counterparts.

Moreover, EU foreign ministers in June are expected to look into the broader geopolitical impact of the war and will discuss a reinforced toolbox to counter foreign interference and information manipulation.

The proposal, teased by the EU’s new Strategic Compass, is set to include a number of measures from reinforcing EU Delegations worldwide, capacities in the EEAS Stratcom taskforces, improving capacities to detect, collect and analyse malicious disinformation and for the member states to look into possibilities of a dedicated sanctions’ regime to counter disinformation.