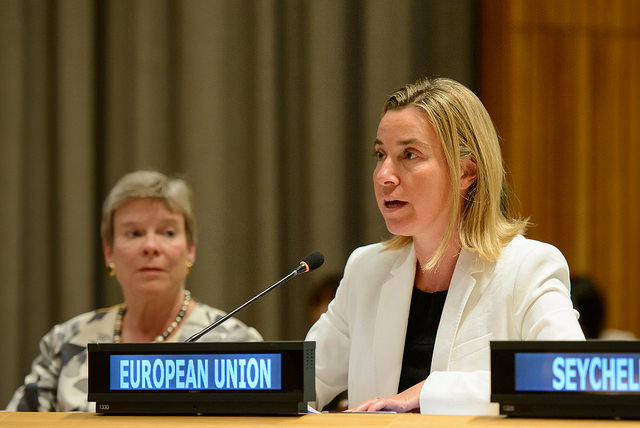 EU foreign policy chief Federica Mogherini will name an independent legal expert to look into accusations of corruption at the European Union’s mission in Kosovo.

Since the end of October, the EU’s judicial and police mission to Kosovo, EULEX, the largest civilian mission in European foreign and security policy, has been shaken by accusations of the corruption, specifically, of the judges and prosecutors of the mission.

On 4 November, EU High Representative for Foreign Affairs and Security Policy, Federica Mogherini, said that she will appoint an independent legal expert tasked with investigating accusations of corruption of the EULEX judges and prosecutors, their collusion with criminals, obstruction of investigations, and concealing evidence.

Mogherini spoke to the European Parliament’s Foreign Affairs Committee and the Socialist group, who welcomed the fact that “the EU high representative has shown determination and principle,” adding that the “investigation so far has been more of a hiding of” facts.

The scandal erupted on 27 October, following an article in Pristina newspaper Koha Ditore, disclosing compromising information on EULEX, citing classified documents of the mission and information unveiled by a one of its prosecutors, Briton Maria Bamieh.

Bamieh was suspended as part of an internal probe into the leaking of confidential information, while later, in a statement to the media, she reiterated that there was reasonable suspicion that officials of the EU mission to Kosovo had accepted bribes in exchange for closing sensitive cases.

Novotna and Flori allegedly accepted bribes in order to enable the closing of criminal investigations in three major cases, whereas Ratel supposedly obstructed the investigation against Novotna and Flori, as well as another investigation against ten individuals suspected of organized crime, among them well-known businessmen and politicians. Flori allegedly received a bribe of some €300,000 to cover up evidence and ensure the insufficient protection of witnesses.

Novotna categorically denied claims that she was involved in corruption. “Regarding those criminal affairs, I did not meet with any of the defendants or with anyone else. I did not take any steps to influence the investigation led by prosecutor Maria Bamieh,” reads the brief statement Novotna sent to the Czech daily Lidove Novini on 30 October.

“We guarantee the citizens that we are operating in accordance with the law. We are interested in and are working on dealing with corruption,” Meucci told a news conference in Pristina.

After the disclosure of the scandal, the European External Action Service (EEAS) initially announced that an investigation into the matter had been under way in EULEX since December 2013, and that an EEAS senior official was working together with the new EULEX chief, investigating those claims in Kosovo. According to Pristina media, Brussels had sent EEAS Director of Civilian Planning Kenneth Deane, to Kosovo.

Mogherini tackled the issue of corruption in EULEX at the first meeting after taking over the post of high representative on 3 November. Her spokesperson, Maja Kocijan?i?, communicated Mogherini’s point of view. “This must be confronted with the greatest possible openness, that it is in the EU’s interest to clear up everything related to that case and to maintain the credibility of that mission.”

The corruption claims have also stirred things up in the European Parliament. Parliament Deputy Speaker Ulrike Lunacek requested that an external, independent body fully investigate the allegations and initiated proceedings for the high representative for foreign affairs and security policy and the EULEX chief to submit a report on the matter to the Parliament.

EEAS officials Federico Gentilini and Kenneth Deane spoke about the corruption allegations at a 3 November session of the European Parliament’s Subcommittee on Security and Defense, but it appeared that they didn’t say anything new due to the investigation.

According to the sources, Gentilini and Deane did not tell the Subcommittee members “anything more than what they had already learned from the media”, Subsequently, Subcommittee chairman Elmar Brok presented the possibility of launching an official investigation in the European Parliament itself into EULEX’s operation.

Belgrade has so far reacted with restraint to claims of corruption in EULEX, speaking out only following information in the media that the EULEX special prosecutor had, in the proceedings against Oliver Ivanovi?, a Kosovo Serb political leader, forged information from the documents that  the Serbian authorities had delivered to EULEX.

According to the Belgrade daily Politika, the Serbian documents contain allegations that  are completely contrary to the claims from the indictment accusing Ivanovi? of murders of Albanians in 1999 and 2000.

Metohija Marko Djuri?, the Director of the Office for Kosovo, asked the competent bodies to urgently examine the issue.

A government still has not been formed in Kosovo, following parliamentary elections in June.

The EU Rule of Law Mission in Kosovo, EULEX, with a mandate to introduce the rule of law and an independent judiciary in Kosovo so as to curb corruption and organized crime, includes 1,600 judges, prosecutors and police officers predominantly from European Union countries, but also from the U.S. and some other states.

The organization’s annual budget is 90 million euros, paid for by the EU member states, as well as by Canada, Norway, Switzerland, Turkey and the U.S.

The mission was established in 2008, became operative in 2009 and is under the jurisdiction of the EU high representative for foreign affairs and security policy and EU members within the EU Council’s Policy and Security Committee. It operates under U.N. Security Council Resolution 1244.