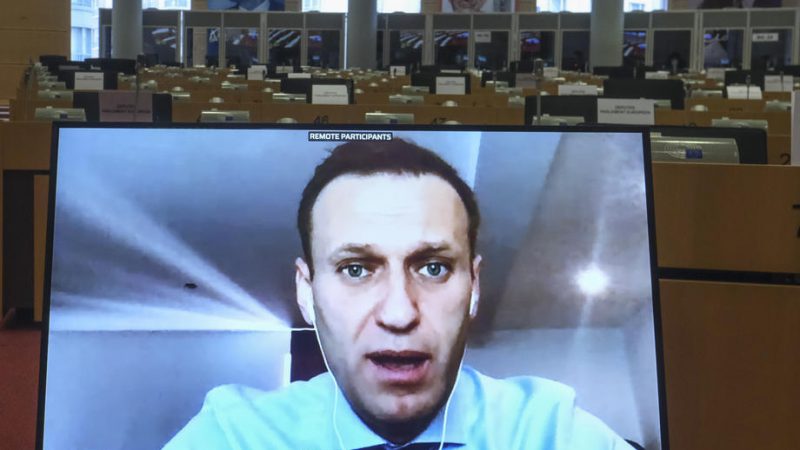 Russian opposition leader Alexei Navalny, who survived a poisoning conducted by Russia in August, has called upon the EU to target oligarchs close to Russian President Vladimir Putin. Meanwhile, the EU is close to sign off on a Magnitsky-style law to impose sanctions on human rights abusers.

“I’m definitely not the first one and unfortunately, I will not be the last one poisoned to kill,” Navalny told the European Parliament foreign affairs committee (AFET) on Friday (27 November).

The 44-year-old anti-graft campaigner collapsed on a flight in Russia in August and was transported to Germany where experts concluded he had been poisoned with the Soviet-designed nerve agent Novichok.

Last week the German government criticised Russia’s move to impose retaliatory sanctions on German and French officials over the poisoning of Navalny calling it “unjustified”.

“The main question we should ask ourselves is why these people are poisoning, killing and fabricating elections,” Navalny said. “The answer is very, very simple: money. So the EU should target the money and Russian oligarchs.”

Navalny accused European politicians of hypocrisy for allowing oligarchs, who grew rich off of Putin’s authoritarian rule, such as billionaires Alisher Usmanov and Roman Abramovich, to keep luxury yachts in European ports.

“Let me say it very straight: as long as the most expensive yacht of Mr. Usmanov is standing in Barcelona or in Monaco, no one in Russia or in the Kremlin will treat European sanctions seriously,” Navalny said. “They just think that they are playing the EU.”

“This approach will be very effective and welcomed by the Russian people,” he added.

Navalny also called on the EU to develop a new approach toward Russia for which the basis “should be very clear dividing two things: Russian people who must be welcomed and treated very warmly from EU from my perspective and the Russian state which must be treated like a bunch of criminals.”

His call comes as the EU will take on powers to freeze assets and impose travel bans on individuals involved in human rights abuses from next month, after the bloc’s member states provisionally approved a European ‘Magnitsky Act’.

EU officials confirmed to EURACTIV that EU ambassadors are set to approve the global human rights sanction regime next week.

The measures, set to be formally signed off on Human Rights Day on 10 December, would target those involved in crimes ranging from genocide and torture to arbitrary arrests or detentions.

Under existing sanctions regimes, the EU does not have the right to enforce travel bans on individuals as the competence lies with national governments, and its other sanction powers are geographically targeted.

The new act would replace the EU’s country-by-country system for imposing asset freezes and travel bans on foreigners deemed to have violated fundamental rights with a single framework for such penalties.

Including Sergei Magnitsky’s name in the EU sanctions proposal had been a point of contention for Greece, Cyprus and Italy as well as Hungary, whose governments have close ties to Russia, and had voiced reservations and held up the draft plan.

The original US regime was established under then President Barack Obama in 2012 and designed to target Russian officials deemed responsible for the death of the Russian tax lawyer Sergei Magnitsky, who died of mistreatment in a Moscow prison.

“What’s beautiful about the Magnitsky Act is that it targets specific high-level officials in Russia and other countries who are personally afraid of being added to the sanctions list and so there’s no question that it alters behaviour,” Bill Browder, an American-born British financier and political activist who lobbied for the original act, told EURACTIV.

“I remember having a conversation with Mikhael Khodorkovsky right after he came out of prison. He told me that prisoners could exactly see a change in behaviour before and after the Magnitsky Act was passed because the jailers were afraid of being added to the Magnitsky list,” he added.

Asked what it the next step for the EU beyond the sanctions, Browder said that Brussels is only half-way.

“My fear is that because of the unanimity requirement for foreign policy decisions, you’re going to have little Russia-friendly countries like Hungary, Malta and Cyprus, that have corrupt officials, using their veto to block the sanctions list,” Browder said.