The issue of an arms embargo on Turkey was raised by Greece at the October summit, a request which was ultimately blocked by Germany, Italy, Spain and Hungary. [EPA-EFE/JOHN THYS]

The EU’s chief diplomat Josep Borrell clearly dodged a question on Monday (7 December) over the possibility to impose an EU arms embargo on Turkey as a means to convince Ankara to de-escalate tensions in the Eastern Mediterranean.

The Spanish politician was speaking at a press conference following a meeting of EU foreign ministers who discussed Europe’s next steps regarding Turkey ahead of a critical EU summit later this week.

The issue of an arms embargo against Turkey was raised by Greece at the October summit, a request which was ultimately blocked by Germany, Italy, Spain and Hungary.

According to Greek government spokesman Stelios Petsas, Prime Minister Kyriakos Mitsotakis is expected to raise the issue again at the 10-11 December EU summit, which will also look into EU-Turkey relations.

Mitsotakis recently stressed that European countries should not supply munitions to a country that can use these munitions against other EU member states.

The discussion over an arms embargo against Ankara puts some EU member states in an uncomfortable position as some of them, including Borrell’s Spain, are among Turkey’s main suppliers.

In September, the European Parliament had adopted a resolution on arms exports, stating that EU rules should take precedence over any economic, social, commercial or industrial interest of member states.

Commenting on the issue, Green MEP Hannah Neumann from the European Parliament’s Subcommittee on Security and Defence, said the EU should make sure that member states suspend any arms deals as long as Turkey is escalating conflicts in the region.

“This would for example apply to Germany, which is still exporting arms to Turkey. With the maritime conflict in the Eastern Mediterranean, the Greeks are particularly concerned about German exports of submarines,” the German politician told EURACTIV.

“We want dialogue, but as long as Turkey oversteps all these boundaries, we need to be very clear in our position and consequences,” she said, adding that the EU needs to find solutions to those issues where Turkey is blackmailing.

“Foreign and security policy issues are taken into account in any case before any decision is made and permission is given […] the number of licenses to Turkey is at a very low level. No permit has been issued for critical equipment that could be used by Turkey in local military operations,” the ministry said.

But in its statement, the German ministry made no reference to six German submarines Type 214TN ordered by Turkey, an issue that has irritated Athens.

Critics in Berlin suggest that the order had been placed well before the escalation of the Greek-Turkish relations, but for Athens, this is not enough.

“These submarines can still change the balance in the region,” an EU diplomat said last week.

Sources told EURACTIV earlier this week that “light sanctions” against individual persons, similar to the ones imposed on Turkey due to its illegal gas drillings off Cyprus, are not ruled out. However, these sanctions had failed to impress Ankara.

The best-case scenario according to Athens, would be for EU leaders to give a mandate to Borrell to come up with a list of “written sanctions” in case Turkey continues escalating. So far the scope of possible sanctions has not been specified.

At a meeting of foreign minister in Berlin last August, Borrell presented some “options” to deal with Turkey. However, these options have only been presented orally and have never been put on paper.

However, a written list of sanctions is not expected to be adopted at this summit.

Sources said such a list could be adopted at a foreign affairs meeting in January but it is highly likely that it will be discussed only at the March EU summit, which in practice means granting Ankara another grace period. 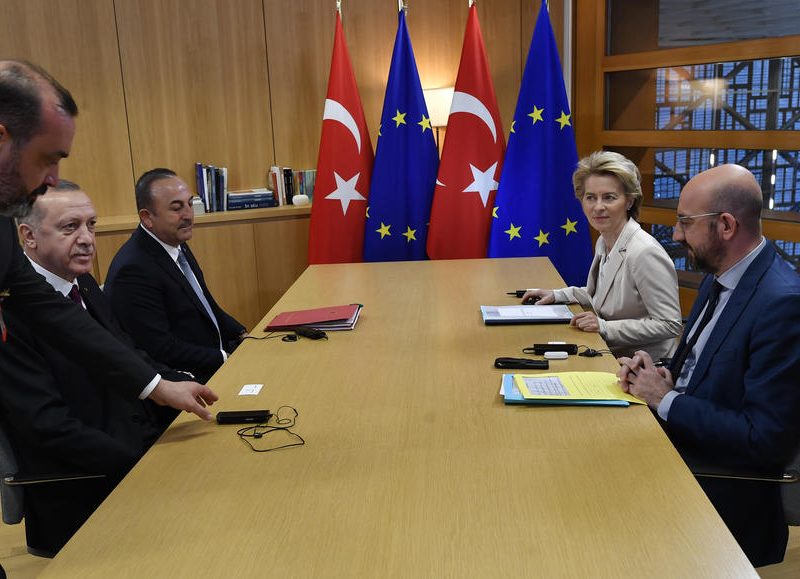