EU ‘unanimous’ in agreeing French treaty-call for help after attacks 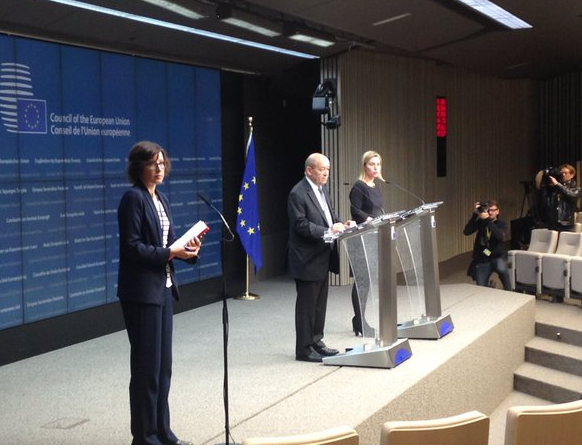 Mogherini said EU defence ministers backed a little-remarked “mutual assistance” clause invoked by France yesterday in what she described as a “highly-charged” and “emotional” meeting in Brussels this morning. She confirmed the clause in the Lisbon Treaty had “never been used before.”

“Europe has answered ‘Yes’”, she said, adding that all member states had unanimously backed the plea from Paris.

French Defence Minister Jean-Yves Le Drian, speaking through a translator, said, “France can’t do everything,” pointing out that the French military was already engaged in the Sahel, in Central African Republic, in Lebanon, and on French domestic soil protecting the population.

The full text of the ‘mutual assistance clause’ 42.7 states:

“If a member state is the victim of armed aggression on its territory, the other member states shall have towards it an obligation of aid and assistance by all the means in their power, in accordance with Article 51 of the United Nations Charter. This shall not prejudice the specific character of the security and defence policy of certain member states. Commitments and cooperation in this area shall be consistent with commitments under the North Atlantic Treaty Organisation, which, for those states which are members of it, remains the foundation of their collective defence and the forum for its implementation”.

But both politicians, pressed on the form such “aid and assistance” would take, pointed to the decision being a “political act”, and separate from the similar such clause underpinning NATO.

Mogherini said it was a “political act and a political message”, adding that it did not require “any further formality” to be activated after today’s unanimous backing in Brussels.

The Foreign Affairs Council was yesterday and today holding its monthly meeting in Brussels, in the wake of Friday (13 November)’s massacre in the French capital. Yesterday they discussed Syria, Iraq, and migration. Today defence ministers took the lead on security and development.

NATO’s more well-known “Article Five”, triggering mutual military assistance among members, has been invoked just once – following the 9/11 attacks in the US.

“France will be in contact bilaterally in coming hours and days to express the support it requires and the EU will ensure the greatest effectiveness in our common response,” the former Italian foreign minister Mogherini added.

The French minister said the EU’s support was a “political act of great significance”. Le Drian said it would “allow us in the hours to come to have bilateral talks where necessary” with other EU states to establish what aid France needed.

Article 42.7, the 'mutual defence clause' invoked by France estipulates that "if a Member State is the victim of armed aggression on its territory, the other Member States shall have towards it an obligation of aid and assistance by all the means in their power, in accordance with Article 51 of the United Nations Charter. This shall not prejudice the specific character of the security and defence policy of certain Member States."

Meanwhile, the article 222 is similar in the wording, as it says that "the Union and its Member States shall act jointly in a spirit of solidarity if a Member State is the object of a terrorist attack or the victim of a natural or man-made disaster. The Union shall mobilise all the instruments at its disposal, including the military resources made available by the Member States."

However, in the implementing decision clarifies that the EU institutions play the leading role, in contrast with the intergovernmental nature of article 42.7, as the Commission and the High Representative will identify the tools, produce the situation assessment reports, and the Commission's Emergency Response Centre, or any other body designated by the EU executive, will take the lead in coordinating the operational response and in producing joint situation assessment reports.

Meanwhile, while it is up to France to request EU’s assistance, the NATO’s full involvement could be triggered by any other representative of the Alliance.

Thus, only 24 hours after New York and Washington were attacked in September 2011, the allies supported NATO Secretary General’s call to invoke Article 5. And it was Canadian ambassador to NATO, David Wright, who first proposed to use it. "Hell, this is an Alliance, we've got Article 5." he told the US ambassador, Nicholas Burns before a meeting with the Secretary General, Lord Robertson, to start preparing the response, according to Edgar Buckley, who was Assistant Secretary General in that period.

Despite France´s reluctance to request NATO´s involvement, the US and other non-European nations, such as Canada and Turkey, are already taking part in the US-led air campaign ‘Operation Inherent Resolve’ to bomb the territories under IS control in Iraq and Syria. The coalition also includes European states such as Belgium, Denmark, France, the Netherlands, and Great Britain.