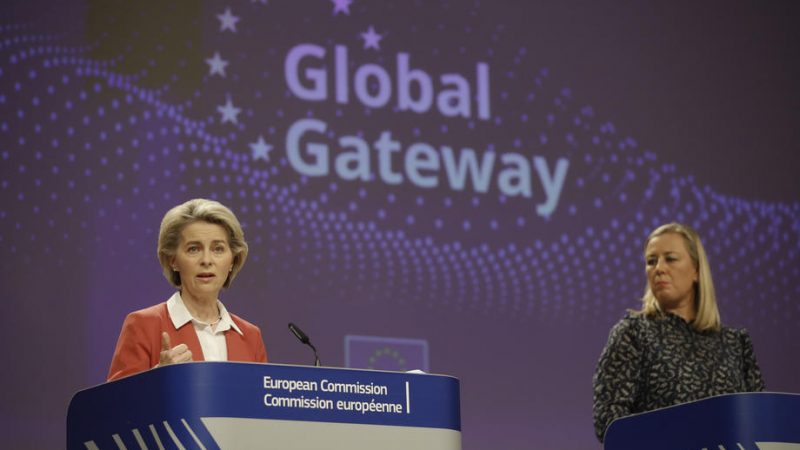 The European Commission unveiled on Wednesday (1 December) a plan to invest €300 billion by 2027 in infrastructure, digital and climate projects around the world to strengthen Europe’s supply chains, boost EU trade and help fight climate change.

The scheme, called Global Gateway, is seen as the EU’s response to China’s Belt and Road initiative and will focus on digitalisation, health, climate, energy and transport sectors, as well as education and research.

EU money, in the form of grants, loans and guarantees, will come from EU institutions, governments, as well as EU financial institutions and national development banks.

“The EU will offer its financing under fair and favourable terms in order to limit the risk of debt distress,” the Commission said in a statement.

China has started its Belt and Road project to boost trade links with the rest of the world already in 2013 and has been spending heavily on the development of infrastructure in dozens of countries around the world.

But EU officials say privately that the financing terms offered by Beijing under its initiative are often unfavourable or not transparent and make some poorer countries, especially in Africa, dependent on China through debt.

“Without proper transparency, good governance and high standards projects can be badly chosen or designed, left incomplete or be used to fuel corruption. This not only stunts growth and deprives local communities but it ultimately creates dependencies, which can limit countries’ ability to make decisions,” the Commission said.

The Commission said the Global Gateway plan would aim to forge links with other countries without creating dependencies.

By helping other countries, the Commission said, the EU would also promote its own interests and strengthen its supply chains, the vulnerability of which became apparent during the COVID-19 pandemic.

“It will contribute to opening up more trade opportunities for the EU economy, in which approximately 38 million jobs are dependent on international trade,” the Commission said.