EU-US reset could be chance for new standard-setting 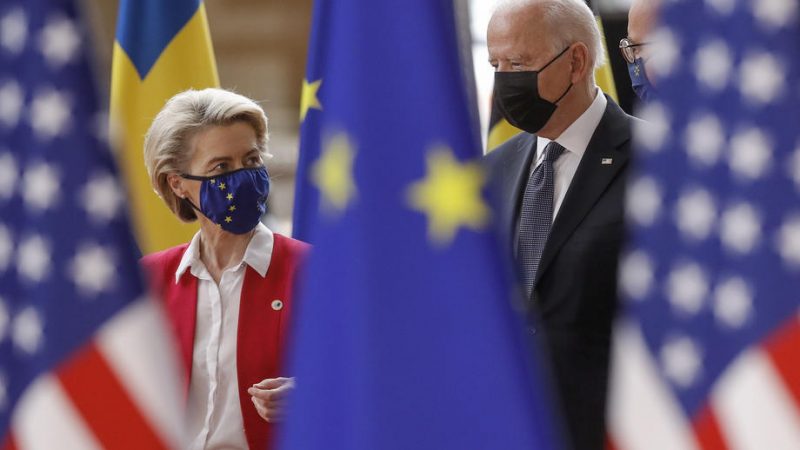 US president Joe Biden (R) is welcomed by President of the European Commission Ursula von der Leyen (L) ahead to the EU-US summit at the European Council in Brussels, Belgium, 15 June 2021. [EPA-EFE/OLIVIER HOSLET]

More than a year into US President Joe Biden’s term in office, ‘America is back’ on issues related to Europe’s security architecture. But the reset could also have a positive impact on cross-policy standard-setting, European stakeholders hope.

The messy Afghanistan withdrawal and the AUKUS submarine deal affront to France have left European allies wondering about the lack of transatlantic consultation, with a sense of distrust that is only slowly rebuilding these days with the recent high-level EU-US coordination over the Russia-Ukraine tensions.

Nevertheless, the one year since the touted transatlantic ‘reset’ has seen positive change, EU policymakers agree.

“Since the EU-US summit in June 2021, we have made several breakthroughs: grounding the Airbus-Boeing dispute, launching the Trade and Technology Council and pausing our steel and aluminium trade dispute,” European Commissioner for Trade, Valdis Dombrovskis, said this week.

“All these achievements, plus this latest resumption of trade in bivalve molluscs, help to create sustainable economic growth and jobs for our workers,” he added.

However, the challenge will be to deliver on the promises made, with experts warning that a real ‘reset’ of the transatlantic relationship will require a more integrated approach to trade, technology, and security.

“Beyond the foreign policy aspects, the future relationship will be about standards and setting standards,” said Ruth Bajada, head of the division United States and Canada at the European External Action Service.

“And of course, this will be all the more important in relation to how to engage other like-minded third countries,” she added.

In the newly established EU-US Trade and Technology Council (TTC), talks range from long-standing irritants such as tariffs to how to govern big tech.

EU policymakers had hoped this would give an impetus for the ‘Brussels effect’ to become a ‘Transatlantic effect’.

“Strategic autonomy, a Greek word, means literally the ability to or the right you have to make your own rules – and this is something we know a lot about in the EU,” MEP Anna-Michelle Asimakopoulou, vice-chair of the European Parliament’s international trade committee.

According to her, the discussion about EU strategic autonomy is closely related to the ‘Brussels effect’, the bloc’s unilateral ability to regulate global markets by setting the standards in a variety of policy areas.

“This forum can lead to an understanding of each other’s rules and through what’s our common set of values and our common interest will lead us to create and agree on new rules,” she said.

However, experts believe it is unlikely to advance any policy convergence in the two blocs, given the very different structures of the legal systems.

Although Washington has repeatedly indicated its willingness to do so, Europeans so far have resisted the idea of using the TTC as a tool to counter Chinese economic coercion.

“As champions of multilateral world order, what we want is rules that lead to a level playing field that make sure things are fair, and that everybody plays by them,” Kumpula-Natri said.

“That is why the TTC can make some headway that goes beyond what we can do individually,” she said, adding that whether Beijing is mentioned or not, “everybody knows that China is not doing pretty well in adhering to these rules”.

However, despite the current reservation about relations with China since the freeze of the EU-China Investment Agreement (CAI) over human rights concerns, EU policymakers warn of using the TTC platform as a tool for confrontation.

“The Trade and Technology Council is not an anti-China platform,” Bajada said.

“Many of the challenges discussed come to the fore and are there because of China, but within the TTC, there is an opportunity to discuss, it will not be the place where trade negotiations will be taking place or result in resolving trade issues,” Bajada said.

She also stressed the fact there is a “window of opportunity” to jointly get the work done ahead of the US midterm elections, which could see a shift to a Republican-controlled US Congress.

US Democrats currently have 222 seats in the House, and 50 seats in the Senate, which means Republicans need to pick up just six House seats and one Senate seat to take full control of Congress.

European policymakers worry this could leave Biden’s agenda in limbo.

Soon after Biden’s election, the European Commission followed up by proposing a transatlantic green trade agenda, saying the two sides “can lead the world” towards a greener economy.

However, questions remain about domestic limitations to Biden’s climate plans, with large parts being dependent on the upcoming midterm election in 2022.

Focus on industrial decarbonisation, trade and finance are the three areas where close transatlantic cooperation and leadership is going to be essential, said George Frampton, director of the Transatlantic Climate Policy Project at the Atlantic Council.

“The intersection of trade and climate policy has something not very well understood by most policymakers in the United States, but it certainly poses significant problems to robust EU-US cooperation,” Frampton said.

He said, however, he does not think the European Commission-proposed Carbon Border Adjustment Mechanism will be the biggest issue since there would be a common concern on both sides of the Atlantic to prevent carbon leakage and protect domestic industries’ competitiveness.

“The real challenge here on the trade-climate nexus is that on both sides of the Atlantic,” he said, adding he expects both sides to be mounting significant public investment and stimulus programmes in favour of decarbonisation of their industries.

“Normally, many of these policies, which will be carbon-limited, are going to lead to objections under current WTO trade rules. And yet both sides will be doing these them in aid of a mutual essential public good, which is economic recovery and decarbonisation.”