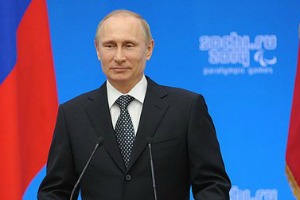 Russian President Vladimir Putin signed a decree yesterday (17 March) formally recognising the Ukrainian peninsula of Crimea as a "sovereign and independent state", defying the United States and Europe, only hours after the two allies imposed the first sanctions on Russian officials since the end of the Cold War.

EU foreign ministers agreed to impose visa restrictions and asset freezes on 21 Russian and Ukrainian officials for their roles in the events leading to the 16 March referendum paving the way for Russia's annexation of Crimea.

The list includes three Russian military commanders in Crimea, and districts bordering on Ukraine. [see list on page 12-13 of the EU Official Journal].

Putin himself, suspected in the West of trying to resurrect the former Soviet Union under Russian leadership, does not appear on either of the blacklists.

US President Barack Obama slapped sanctions on 11 Russians and Ukrainians blamed for the seizure, including former Ukrainian president Viktor Yanukovich, and Vladislav Surkov and Sergei Glazyev, two aides to Putin.

There were only three names in common on the US and European lists – Crimean Prime Minister Sergey Aksyonov, Crimean parliament Speaker Vladimir Konstantinov and Leonid Slutski, chairman of the Russian Duma's committee on the Russian-led Commonwealth of Independent States, or CIS, grouping former Soviet republics. The EU blacklisted Yanukovich earlier this month.

Putin appeared rather unimpressed and flashed smiles, which were described as “mysterious” at a ceremony in which he personally awarded Russian athletes who competed in the recent Sochi Paralympic games. He is expected today to address a special joint session of Russia's Duma, the lower chamber of the Federation's parliament, which could decide to annex Crimea.

The formal annexation of the majority ethnic-Russian region is expected to trigger new sanctions. A White House spokesman declined to rule out adding Putin to the US sanction list at a later stage.

New EU sanctions should be agreed upon at the 20-21 March Spring EU summit, which could also see the signature of the political chapters of the EU-Ukraine Association Agreement [read more].

“Any further steps by the Russian Federation to destabilise the situation in Ukraine would lead to additional and far-reaching consequences for relations in a broad range of economic areas between the European Union and its Member States, on the one hand, and the Russian Federation, on the other hand”, the EU ministers stated in a communiqué.

But many EU countries, especially those strongly dependent on Russia for their gas supply, fear Russian retaliation for the sanctions.

As Bulgarian minister Kristian Vigenin told journalists yesterday, the agreed EU list was “the only possible compromise”, with some member countries proposing longer lists and others, shorter. He denied that his country was acting as a “Trojan horse” for Russia [read more].

What is certain is that, as a result of bargaining among EU ministers, the names of the CEOs of Russia’s two largest energy firms, Alexei Miller of Gazprom and Igor Sechin of Rosneft, do not appear on the personal sanctions list [read more].

Latvia said the EU should compensate any countries hurt by sanctions against Russia. "Agreeing on common sanctions against Russia, it is of decisive importance for the European Union to reach an agreement on compensation to those member states that might be affected the most by the consequences," Latvia's Finance Minister Andris Vilks said in a statement.

Amid fears that Russia may move into eastern Ukraine, where there is a significant Russian-speaking community, Obama warned that "further provocations" would only increase Moscow's isolation and exact a greater toll on its economy.

"If Russia continues to interfere in Ukraine, we stand ready to impose further sanctions," he said.

Obama is expected in Brussels for an EU-US summit on 26 March. US Vice President Joe Biden is on his way to Europe, in order to send a clear signal to Russian President Vladimir Putin about his intervention in Ukraine.

Biden will meet today with Polish Prime Minister Donald Tusk and President Bronis?aw Komorowski. He will also visit Lithuania, where he is expected to meet the country’s President Dalia Grybauskait?, as well as her colleagues from Latvia's Andris Berzins, and from Estonia's Toomas Hendrik Ilves.

The three Baltic countries, which today are EU and NATO members, are former Soviet republics with Russian minorities. As Russia has invoked its right to defend the Russian-speaking people in Ukraine, these countries are concerned about their security.

Moscow responded to Western pressure for an international "contact group" to mediate in the crisis by proposing a "support group" of states. The Russian scheme would push for recognition of the Crimean referendum, and urge a new constitution for a “federal” Ukraine that would require it to uphold political and military neutrality.

While a Western diplomat quoted by Reuters said that some of Moscow's ideas may offer room for negotiation, Ukraine's interim president, Oleksandr Turchynov, ruled out accepting the annexation of its territory.

German Foreign Minister Frank-Walter Steinmeier also said that his country was against the Russian proposal.

Asked by EURACTIV to comment, the leader of the Socialists and Democrats group in the European Parliament Hannes Swoboda said that in the Council where member states sit,  “there is a strong resistance for an economic war through sanctions”.

“More sanctions will not bring Crimea back”, said Swoboda, who argued that for some EU countries more dependent than others on Russian gas, it was very difficult to push too hard on Moscow. The S&D leaded also warned on possible negative consequences on the difficult diplomatic dossiers of Iran and Syria, where Russia is playing an important role.

Swoboda argued that Ukraine had the right to ask for EU membership, but the EU should not give the impression that the country is put on a fast track just “because of the situation”. He described the situation in Ukraine in the following terms:

“Right now, oligarchs have replaced other oligarchs, they are hesitant to for new parliamentary elections, there are many other issues such as the economy, the justice reform, so many things to do to create the image that Ukraine can become a member”.

The S&D leader also said that the Ukrainian government had to demonstrate that it is the government of all of Ukraine and take in members of the Russian speaking minority in their government.

Regarding France, who reportedly is opposed at giving a clear EU accession perspective to Ukraine, he said that this was in fact “a non-issue”.

“The treaty says that Ukraine has the right to apply for membership when it's ready and Hollande will not be president by then," Swoboda said.

5 responses to “EU, US sanctions fail to impress Putin”