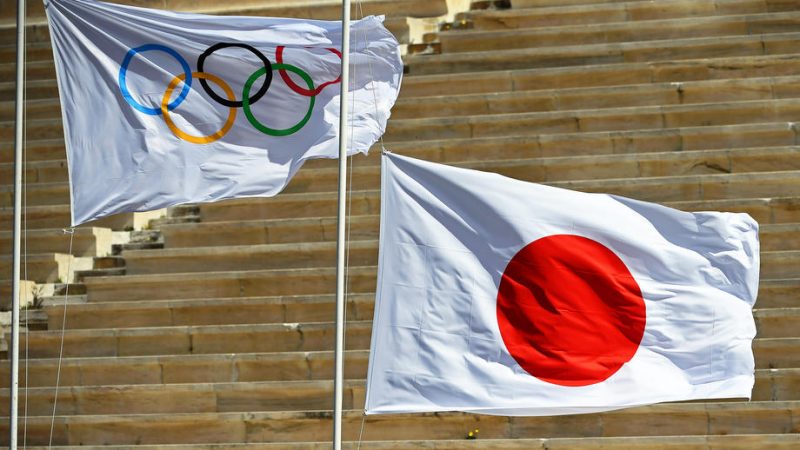 The national flag of Japan (R) is hoisted next to the Olympic flag (L) during the Olympic Flame handover ceremony for the Tokyo 2020 Summer Olympic Games at the Panathenaic Stadium in Athens, Greece, 19 March 2020. [EPA-EFE/ARIS MESSINIS / POOL]

European Commissioner Margaritis Schinas and Slovenian Prime Minister Janez Jansa on Sunday (18 July) said they had asked athletes from Slovenia – currently holding the EU Council’s rotating presidency – to be allowed to bear the bloc’s starred flag as well as their own national flag at the Tokyo Olympics opening ceremony.

Carrying the EU flag alongside their country’s own would “render Slovenian athletes ambassadors for European unity and the values underpinning our Union, which match those of the Olympic movement,” Schinas and Jansa wrote in a letter to International Olympic Committee (IOC) President Thomas Bach.

Schinas – whose portfolio on the Commission team includes “promoting the European way of life” and a sports component – wrote that the flag could stand as a “symbol of peaceful coexistence, tolerance and solidarity”.

“We will fully support you in any way you see appropriate in introducing this special and historical gesture”, both wrote to Bach, adding that it could “serve as a powerful representation of how unity and peace must be celebrated through this event, fundamental as they are to both the European and Olympic spirit”.

“We believe that, as two organisations united by these shared values, the European Union and the International Olympic Committee are uniquely positioned to promote peace and understanding at a time when the world needs it most”, Jansa and Schinas wrote.

The Olympic Games are scheduled to run from 23 July to 8 August in Tokyo, Japan.

France’s Europe Minister Clement Beaune was among the first to react and said he “fully supports” the idea.

It is not the first time the EU has made such a push.

In 2004, then European Commission President Romano Prodi called for athletes from EU member states to display the EU flag as well as their own national flag during the 2008 Olympic Games in Beijing, China.

A country that will not be able to fly its own flag in Tokyo is Russia – its team name, flag and national anthem were banned from this year’s Tokyo Olympics and the 2022 Winter Games in Beijing by the Court of Arbitration for Sport over large-scale doping accusations.