Trump closed US arrivals to travellers from the Schengen border-free zone — which does not include Britain and Ireland — in what he said was an “aggressive” effort to contain the spread of the often deadly disease. 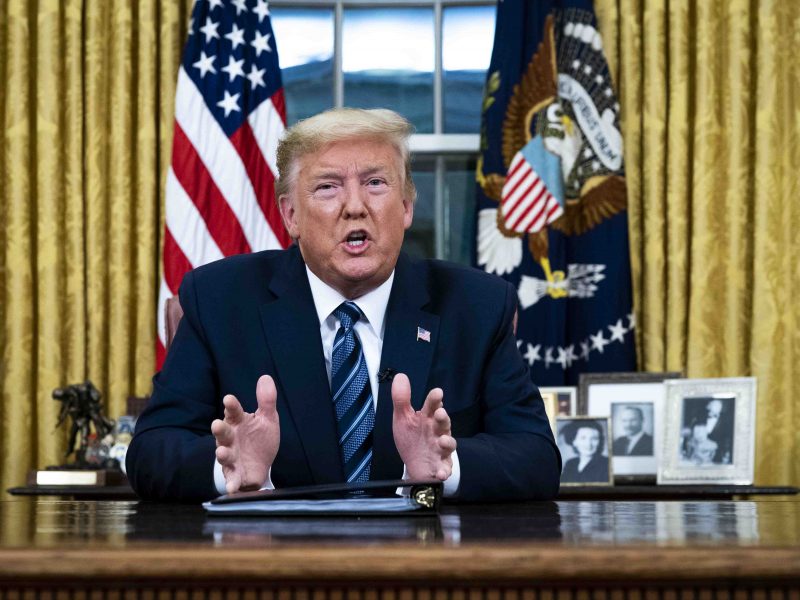 But European leaders argue that their scientific advice suggests travel restrictions are ineffective when the virus is already present almost worldwide, and lamented that they had not been consulted.

“The coronavirus is a global crisis, not limited to any continent, and it requires cooperation rather than unilateral action,” EU chiefs Ursula von der Leyen and Charles Michel said.

“The European Union disapproves of the fact that the US decision to impose a travel ban was taken unilaterally and without consultation,” the presidents of the European Commission and European Council said.

“The European Union is taking strong action to limit the spread of the virus,” they insisted.

Earlier, Michel had made it clear that what Brussels fears most is the economic hit from the ban, and he promised that EU experts would meet quickly. “Economic disruption must be avoided,” he said.

The Schengen zone includes most EU member states along with Iceland, Liechtenstein, Norway and Switzerland — but not Britain, Ireland, Croatia, Romania, Bulgaria or Cyprus.

Trump said the ban on travellers from the zone would come into effect at midnight Friday, and would not affect US citizens returning from Europe.

Trump briefly caused alarm as he announced that a “tremendous amount of trade and cargo” would also be banned, forcing officials to clarify the measures would apply only to humans, not goods.

Despite the White House walking back this threat, the travel ban itself could hit airlines, travel firms and global businesses hard, and Asian and European markets plummeted on the news.

In Brussels, European officials and diplomats were furious.

“If he wants the EU to be the culprit, so be it. It’s erratic, unilateral and creates a lot of problems that are unnecessary,” one envoy fumed.

“Trump is simply kicking a man when he’s down. He wants to appear to be in control, but in seven days it will be clear that he is not,” he said, referring to the spread of the disease in America.

“This is going to be serious. What airlines will still exist when this is all over?”

Even Britain, which has left the EU and is itself exempt from Trump’s ban for now, expressed concern.

“With regard to flight bans, we are always guided by the science as we make our decisions here,” finance minister Rishi Sunak told BBC radio.

“The advice we are getting is that there isn’t evidence that interventions like closing borders or travel bans are going to have a material effect on the spread of the infection.”

The World Health Organization describes the novel coronavirus outbreak as a “controllable pandemic” and European countries — working with the EU — are scrambling to coordinate a response.

But the 27 EU members are not all suffering to the same degree and their responses have differed, with some imposing or advising draconian lockdowns and others caution.

Every country in the EU has now recorded at least one coronavirus COVID-19 case and the continent as a whole has had 22,969 cases, most notably Italy with 12,462 cases and 827 fatalities.

Italy has put much of its population on lockdown, closing bars, restaurants and all shops apart from groceries and pharmacies. Several countries have imposed similar if less sweeping measures.

On Thursday, Ireland became the latest EU member to ask its citizens for sacrifices and “social distancing”.

But the EU response has been far for unified, despite calls for solidarity from several leaders, and member states are waiting for von der Leyen’s commission to announce plans to “prop up” their economies on Friday.

🇪🇺 "The European Union disapproves of the fact that the US decision to impose a travel ban was taken unilaterally and without consultation," said @MamerEric, @EU_Commission chief spokesperson #CoronavirusPandemic #Covid_19 pic.twitter.com/FwxiY1hjdQ