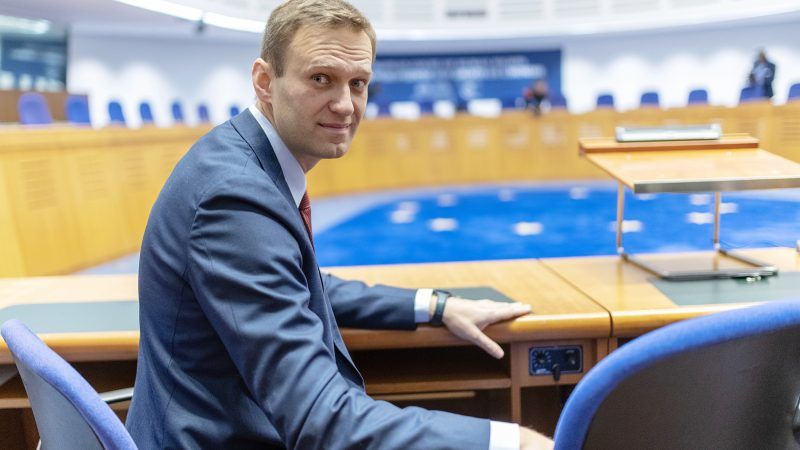 Russian opposition leader Alexei Navalny waits before a hearing for the delivery of the European Court of Human Rights (ECHR) Grand Chamber judgment regarding his case against Russia at the court in Strasbourg, France, 15 November 2018. [Patrick Seeger/EPA/EFE]

The European Court of Human Rights ruled on Thursday (15 November) that Russia’s repeated arrests and detention of opposition leader Alexei Navalny were politically-motivated and breached his human rights, a decision certain to displease the Kremlin.

The court, based in Strasbourg, said Navalny had been subject to seven such arrests in 2012 and in 2014 and that at least two of those arrests had been designed to suppress political pluralism.

“The Court found that there was ‘converging contextual evidence’ that the authorities were becoming increasingly severe towards Mr Navalny and that his allegation of being a particular target appeared coherent in the context of a general move to bring the opposition under control,” it said in a statement.

It ordered Russia to pay around €64,000 in damages and costs to Navalny.

Navalny, Russia’s most prominent opposition leader, was barred from running against Vladimir Putin in a presidential election earlier this year and has been repeatedly jailed for organizing what the authorities say are illegal protests.

Putin, who makes a point of never pronouncing Navalny’s name in public, has suggested that Navalny is backed by the United States and would destabilize Russia if he came to power.

Navalny likens Putin to an autocratic Tsar, saying he has been in power for too long and oversees a political system rife with corruption.

Navalny, who was in Strasbourg for the ruling, welcomed the court’s decision.

“It’s a very fair judgment,” he told reporters. “… (It) is very important not just for me but also for other people all over Russia who are arrested every day.”

Russia did not react immediately but is likely to appeal the ruling.

The ruling is likely to strain already poor relations between Russia and the Strasbourg-based court which has repeatedly ruled against Moscow, prompting Russian officials to talk about the possibility of quitting its jurisdiction.

One response to “European court says Navalny was a political prisoner”