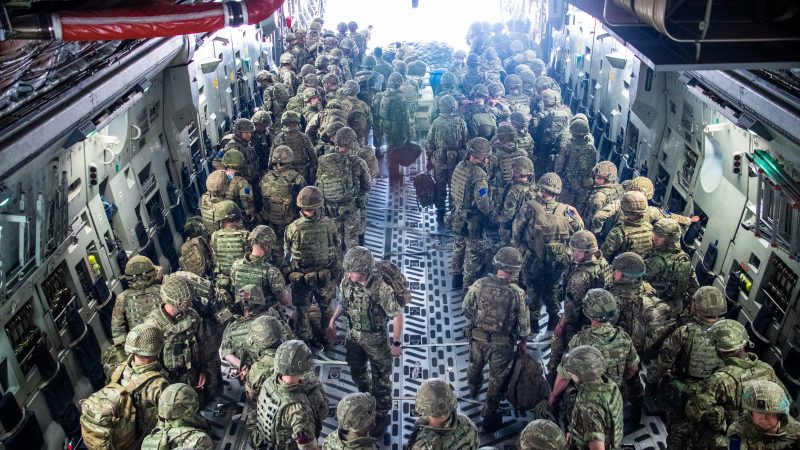 A handout picture provided by the British Ministry of Defence shows British Forces from 16 Air Assault Brigade on arrival in Kabul, Afghanistan, 15 August 2021. The military personnel are deployed to assist in evacuating British nationals and entitled persons as part of Operation PITTING amidst the worsening security situation there. The additional deployment of approximately 600 troops is to facilitate the safe and deliberate exit of remaining UK and eligible personnel. [Handout photo/EPA/EFE]

The Taliban declared the war in Afghanistan was over after insurgents took control of the presidential palace in Kabul on Sunday (15 August), while European nations and the EU scrambled to evacuate their citizens and local staff from Kabul, as NATO said it was trying to keep the airport open.

The hardline Islamists were on the brink of total victory in Afghanistan, after the government conceded it was preparing for a “transfer of power”.

President Ashraf Ghani fled the country on Sunday as the Islamist militants entered the city, saying he wanted to avoid bloodshed, while hundreds of Afghans desperate to leave flooded Kabul airport.

“Today is a great day for the Afghan people and the mujahideen. They have witnessed the fruits of their efforts and their sacrifices for 20 years,” Mohammad Naeem, the spokesman for the Taliban’s political office, told Al Jazeera TV.

“Thanks to God, the war is over in the country.”

Naeem said the type and form of the new regime in Afghanistan would be made clear soon, adding the Taliban did not want to live in isolation and calling for peaceful international relations.

“We have reached what we were seeking, which is the freedom of our country and the independence of our people,” he said. “We will not allow anyone to use our lands to target anyone, and we do not want to harm others.”

In a Facebook post, Ghani said he had left the country to avoid clashes with the Taliban that would endanger millions of residents of Kabul.

He did not say where he was and it was not clear where he was headed or how exactly power would be transferred following the Taliban’s lightning sweep across Afghanistan.

Al Jazeera earlier showed footage of what it said were Taliban commanders in the presidential palace with dozens of armed fighters.

Some local social media users in Kabul branded Ghani a coward for leaving them in chaos. A tweet from the verified account of the Afghan Embassy in India said: “We are all banging our heads in shame.”

The European Union was left desperately trying to find a solution for Afghan staff from its representation facing possible reprisals, and seeking to convince its 27 member states to offer them visas.

“The matter is extremely urgent, we take it very seriously and continue to work hard, together with EU Member States, on implementing rapid solutions for them and ensure their safety,” an EU spokesman said.

Germany, France and the Netherlands were among countries moving diplomatic personnel from their embassy in Kabul to the airport ahead of an evacuation

“We are not going to risk our people falling into the hands of the Taliban,” Foreign Minister Heiko Maas told the Bild daily.

France’s ambassador to Afghanistan tweeted a video of himself leaving the Green Zone in Kabul aboard a helicopter as Paris looked to set up a temporary mission at the airport.

Other NATO members including Britain, Italy, Denmark, Sweden and Spain have also announced they are evacuating their embassy personnel.

The French presidency said it would “do the utmost to guarantee the safety” of French nationals still in the country as well as Afghan staff.

In a statement it said the evacuation, involving several hundred people, had begun in April.

“France is one of the few countries that has maintained the capability… to protect the Afghans who worked for the French army, as well as journalists, human rights activists, artists and Afghan figures who are especially threatened,” the statement said.

Paris has vowed an “exceptional effort” to welcome Afghans under threat for their human rights work. More than 600 Afghans employed in French organisations in the country have already arrived in France along with their families, the government said on Friday.

Russia said it saw no need to evacuate its embassy for the time being. Turkey said its embassy would continue operations.

Britain was deploying around 600 troops to help evacuate its roughly 3,000 nationals from the country, and Prime Minister Boris Johnson said the “vast bulk” of remaining embassy staff in Kabul would return to the UK.

He was to hold fresh crisis talks on Wednesday, recalling parliament from the summer break to discuss what Britain, which lost 457 troops in the two-decade-long war, should do next.

Denmark and Norway have said they are temporarily shutting their Kabul embassies while Finland will evacuate up to 130 local Afghan workers, ministers from the Nordic countries said on Friday.

Swedish Foreign Minister Ann Linde also noted that the country’s evacuees would include Afghan interpreters and other local staff.

Meanwhile the Dutch embassy in Kabul was evacuated overnight and is operating from a makeshift office near the airport, the country’s foreign ministry said Sunday.

The Netherlands said Friday that it would take in Afghan interpreters and some other embassy staff.

At Kabul airport, hundreds of Afghans waited for flights, some dragging luggage across runways in the dark, while women and children slept near security corridors.

A source at the airport said some scuffles broke out among people unable to get a place as departures were halted.

Local television 1TV reported that multiple explosions were heard in the capital after dark, but the city was largely quiet during the day on Sunday.

Aid group Emergency said 80 wounded people had been brought to its hospital in Kabul, which was at capacity, and that it was only admitting people with life-threatening injuries.

In Washington, opponents of President Joe Biden’s decision to end America’s longest war, launched after the 11 September 2001, attacks, said the chaos was caused by a failure of leadership.

American diplomats were flown by helicopter to the airport from their embassy in the fortified Wazir Akbar Khan district as Afghan forces, trained for years and equipped by the United States and others at a cost of billions of dollars, melted away.

A US State Department spokesperson said early on Monday that almost all embassy personnel, including Ambassador Ross Wilson, were at the airport and the American flag had been lowered and removed from the embassy compound.

Asked if images of helicopters ferrying personnel were evocative of the United States’ departure from Vietnam in 1975, US Secretary of State Antony Blinken told ABC News: “Let’s take a step back. This is manifestly not Saigon.”

Biden has faced rising domestic criticism after sticking to a plan, initiated by his Republican predecessor, Donald Trump, to end the US military mission in Afghanistan by 31 August.

In a statement on Sunday, Senate Republican leader Mitch McConnell blamed Biden for what he called a “shameful failure of American leadership”.

“Terrorists and major competitors like China are watching the embarrassment of a superpower laid low,” McConnell said.

“We do not think that foreign forces will repeat their failed experience in Afghanistan once again.”

The #Taliban not only seized appr. a hundred US humvees and (MaxxPro) MRAPs at Kunduz airport, but also several US ScanEagle drones.
Billions of US tax payer $ going to Islamist extremists, thanks to the administration's hasty withdrawal without a peace deal or follow up mission. pic.twitter.com/Fb5MTpdLKK

Many Afghans fear the Taliban will return to past harsh practices in their imposition of sharia, or Islamic religious law. During their 1996-2001 rule, women could not work and punishments such as stoning, whipping and hanging were administered.

The militants sought to project a more moderate face, promising to respect women’s rights and protect both foreigners and Afghans.

“We are ready to have a dialogue with all Afghan figures and will guarantee them the necessary protection,” Naeem told Al Jazeera Mubasher TV.

United Nations Secretary-General Antonio Guterres urged the Taliban and all other parties to exercise the utmost restraint, and expressed particular concern about the future of women and girls in Afghanistan.

My source sent me this video of all the Taliban prisoners being released … this is #BidensAfghanistan Terrorists that many of our troops and Afghan troops captured free to start terror training camps again pic.twitter.com/XX4L7noBC5