France, Germany, the UK and the EU urged Iran to stand by its 2015 nuclear deal commitments on Monday (11 November), after the UN’s nuclear watchdog said in a new report that it detected uranium particles at an undeclared site in Iran, revealing even more cracks in the accord. 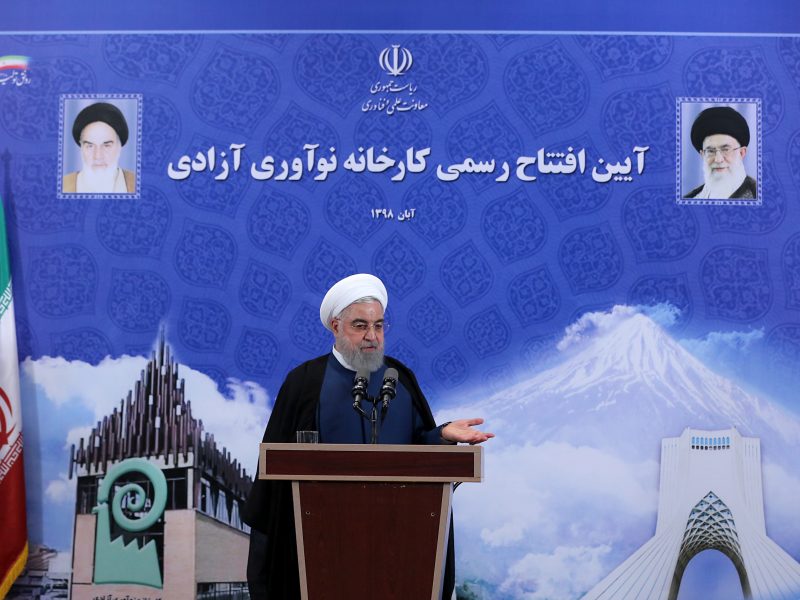 According to the IAEA report, Tehran currently stores almost twice as much low-enriched uranium as the agreement of the 2015 nuclear accord allows, with its stockpile having reached the equivalent of 551 kilograms, as opposed to the 300-kilogram limit.

Iran announced last week it had resumed low-grade uranium enrichment at its underground Fordow nuclear plant and said it could refine up to 60% of fissile purity, not far off the 90% level needed for nuclear bomb fuel.

The report, however, concluded that Iran has prepared a new facility for testing enrichment centrifuges – effectively violating the provisions laid down in the 2015 Joint Comprehensive Plan of Action (JCPoA).

In 2015, the European-brokered accord led to the lifting of international sanctions against the country. Since then, however, the Trump administration unilaterally terminated the 2018 agreement and imposed new sanctions on Iran.

Tehran has always insisted that its nuclear programme wants nuclear energy only for civilian applications. The Islamic Republic repeatedly announced it does not feel bound by the accord and justified recent breaches of the deal by treaty parties failing to meet the promised economic promises, in return for curtailing the nuclear program.

The IAEA said in the report its nuclear inspectors had “detected natural uranium particles of anthropogenic origin at a location in Iran not declared to the agency,” which according to the watchdog are likely to be the product of uranium which has been mined and undergone initial processing, but not enriched.

“It is essential that Iran continues its cooperation with the Authority to resolve this issue as soon as possible,” the IAEA stated after the report publication on Monday.

The report made no reference to an incident involving one of the IAEA’s inspectors two weeks ago, who was prevented from entering a nuclear facility and led to Iran cancelling her accreditation.

During her attempt to inspect the Natanz uranium enrichment plant, the inspector had allegedly triggered an alarm at the gate to the facility, raising fears that she was carrying “suspicious material” – an accusation which the IAEA strongly rejected.

Europeans had repeatedly stated their commitment to abide by the agreement and endeavour to allow European companies to maintain business relations with Iran.

Earlier in the day, EU foreign ministers had affirmed their support for the pact in their meeting in Brussels.

EU foreign affairs chief Federica Mogherini urged Iran to comply with nuclear accord or face action. However, according to EU diplomats, the bloc so far was waiting for the IAEA report to verify Iran’s latest announcements on enrichment.

Under the terms of the nuclear accord, if any of the European signatories believes Iran has violated it, they can trigger a dispute resolution process that could lead to an UN Security Council meeting within 65 days, announcing a so-called “snapback” of global UN sanctions on Tehran.

According to Mogherini, EU foreign ministers did not discuss sanctions during their meeting, but in her words it is becoming “more and more difficult” to save the accord.

“We might have a Joint Commission meeting in the coming days,” Mogherini said, referring to the forum where the signatories can discuss problems and potentially set the ground for exploring sanctions.

Iran must return to its commitments, “otherwise we will reserve the right to use all mechanisms specified in the deal” for sanctions to be reimposed, Maas said, announcing he would meet with French and British counterparts in Paris on Monday afternoon, the so-called E3, to coordinate future steps.

Ahead of the E3 meeting in Paris, an EU diplomat told reporters that “the window of opportunity for de-escalation is narrowing very seriously.”

“The Foreign Ministers of France, Germany and the United Kingdom and the High Representative of the European Union are extremely concerned by the latest announcements that Iran is restarting uranium enrichment activities at the Fordow facility, as confirmed by the International Atomic Energy Agency (IAEA) in its November 11 report,” the three Western powers and EU’s chief diplomat said in a statement in reaction to the publication of the IAEA report.

Tehran’s latest decision “represents a regrettable acceleration of Iran’s disengagement from commitments under the JCPoA, including exceeding the maximum allowed low enriched uranium stockpile and the maximum allowed enrichment limits” and therefore “must return to full implementation of its commitments under the JCPoA without delay,” the joint statement said.

“We affirm our readiness to consider all mechanisms in the JCPOA, including the dispute resolution mechanism, to resolve the issues related to Iran’s implementation of its JCPOA commitments,” they said in the joint statement, while stating their “determination to continue all efforts to preserve the agreement, which is in the interests of all,” the joint statement from France, Germany, Britain and the EU said.

They provide “opportunity for remaining JCPoA participants either to take serious practical steps to preserve the JCPoA or, along with the US, accept the full responsibility for any possible consequences,” he said as quoted by Associated Press.

Iran has repeatedly warned the remaining parties to the deal — Britain, China, France, Germany and Russia — that the agreement can only be rescued if they help the country circumvent US sanctions.