Denis Sassou Nguesso has been president of Congo Brazzaville for 32 of the last 37 years. [GovernmentZA/Flickr]

Back then, President Denis Sassou Nguesso finished third in the first round of voting, but was returned to power five years later after fighting a brief civil war against Pascal Lissouba’s government. Having served as president for 32 of the last 37 years, the prospect of Sassou being ousted was always slim. This time he took 60% on a turnout of around 70%.

The allegations of vote buying, irregularities with the electoral register, and media and campaigning bias in favour of the incumbent president are troubling but familiar. February’s presidential poll in Uganda was hardly free and fair either – President Yoweri Museveni, who won a seventh term in a rigged election, has kept opposition leader Kizza Besigye under house arrest since the election – though that didn’t stop the EU sending an observation mission to Kampala.

Brazzaville is, in many ways, the forgotten Congo. Across the Congo River in Kinshasa, Democratic Republic of Congo’s President Joseph Kabila is mulling over whether to change the constitution to let himself run for a third term in elections scheduled for November. At around 70 million, the DRC has a population more than 15 times the size of its neighbour, and a long history of political instability and economic exploitation. Kabila’s machinations will provoke far more interest from the foreign media and western governments. 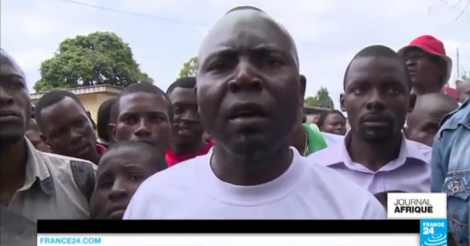 Opposition strongholds in Brazzaville were closed on Tuesday (29 March) following a strike call over the re-election of Congo’s veteran ruler Denis Sassou Nguesso in polls his rivals say were marred by “massive fraud”.

In Brazzaville, the EU was barely engaged. Neither was anyone else. Aside from French reporters, the foreign media presence was also tiny. Considering that Congo-Brazzaville has only 4.5 million inhabitants, little foreign investment from European countries other than France and Italy, and only a handful of national embassies, this, too, was no surprise.

Much to the chagrin of the Congolese government, the EU did not send an election observation mission and issued a perfunctory post-election statement noting that voting had been “generally peaceful, despite interruptions to means of communication and shortcomings in the organisation of the election”.

“They (the EU) should be fair, we requested an observation team. This election is about the will of the Congolese people. Why can’t they respect that,” Laurette Angouono, a civil servant, told euractiv.com. Anguouno, and others, also complained that French media coverage of Congo’s political situation was colonialist and paternalist.

The main messages to Congo from Brussels have been of criticism: of the democratic process (or lack of it), and of Sassou’s move to change the national constitution to extend his time in office.

Fair enough, but criticism without constructive engagement will achieve little.

Engagement with Europe – both political and economic – is what Congo, and many its neighbours, need if they are to become functioning democracies.

Economically, tumbling oil prices mean that Congo-Brazzaville needs to diversify away from its long-standing reliance on oil, which accounts for roughly 70% of its economic output and, in 2014, 80% of government revenue.

As well as developing other minerals such as phosphate rock and potash, the IMF’s chief economist, Jules Tchicaya-Gondhet de Trebaud, told EURACTIV that Congo urgently needs to invest in roads, bridges and its electricity grid.

Europe could play an important role in this. In other sub-Saharan African countries, the European Investment Bank (EIB), together with the French and German development banks are among the main investors in transport and energy infrastructure projects, particularly in renewable energy.

Meanwhile, the recently created EU-Africa Infrastructure Trust Fund, which has paid out more than 70 grants to infrastructure projects with a total value of more than €8.9 billion, is a way to generate private sector investment from public money. The fund combines grants from the European Commission and national governments with the EIB’s lending capacity.

Europe and the United States have already lost a chunk of their political and economic clout in sub-Saharan Africa, and they need to offer Africans more than the diplomatic ‘stick’ of criticism. Chinese money paid for a new suspension bridge on the outskirts of Brazzaville, and China is, increasingly, the main trading partner for Congo, as well as other sub-Saharan African countries.

Economic investment and trade creates political leverage. Democracy won’t happen overnight, particularly in countries whose tribal divisions were actively promoted and accentuated by European colonialists as a means of maintaining order, and were then used as Cold War pawns in the years after obtaining independence.

If all Europe can offer is criticism without engagement, we can hardly be surprised if African countries turn their heads elsewhere.