Europe’s biggest challenge now comes from the US, Timmermans says 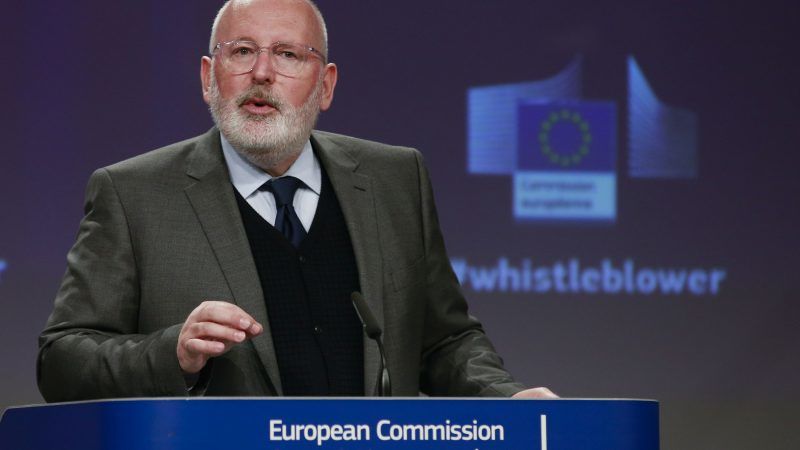 Europe’s most important task for the rest of this year is to stay strong and united in the face of challenges coming from the United States, the European Commision First Vice-President Frans Timmermans told a business forum on Wednesday (23 May), in comments likely to irk Washington.

Timmermans, a Dutch Social Democrat known for not mincing his words, said the way the EU will handle the ongoing trade dispute with Washington and the Iran nuclear deal, which US President Donald Trump plans to abandon [like he did with the Paris climate agreement last year] would shape Europe’s future role on the global scene.

Asked about key issues for business and stability in the next twelve months, Timmermans told the European Business Summit’s plenary roundtable:

“In the very short term, I believe it is to have a clear and unified answer to the challenge posed by those who don’t believe in free trade. The world is watching Europe now. They are wondering: ‘Can they stay united?’.The answer is going to decide if we are going to be the ones to shape the world or be shaped by others. It is going to determine if Europe is going to be strong or be a playing field for others.”

Europe’s relations with the US, its biggest economic and security ally since the 1940s, went downhill after the maverick businessman Trump moved into the White House and proclaimed his protectionist “America first” approach as the pillar of his policies. However, some EU countries, like Poland and Hungary, have been vocal in their support for Washington.

Comparing the recent tensions with the US to the Cold War and the fall of the Berlin wall in 1989, when “it took us some time to find our footing”, he said “there now seems to be a wall on the other side that is also coming down. Some things in transatlantic relations that we never thought would change are being challenged, the issues of trade and security”.

“This is the first [US] administration that thinks it is in the American interest to have a divided Europe rather than a united one. This poses a real challenge for Europe,” Timmermans said.

His remarks were another strong criticism of Trump after European Council President Donald Tusk said last week that “with friends like Trump, who needs enemies”.

Trump announced the US would withdraw from the Iran deal earlier this month, saying the international agreement was a failure and an “embarrassment to the United States”.

But Europe appeared to stand its ground and EU leaders agreed at an informal summit in the Bulgarian capital Sofia, on a united approach to salvaging the Iran nuclear agreement and averting a trade war over tariffs Washington plans to introduce next month.

However, the EU’s Trade Commissioner Cecilia Malmström told reporters this week there were signs that Europe’s efforts to persuade Trump to give up on the tariffs on imported steel and aluminium may fail.