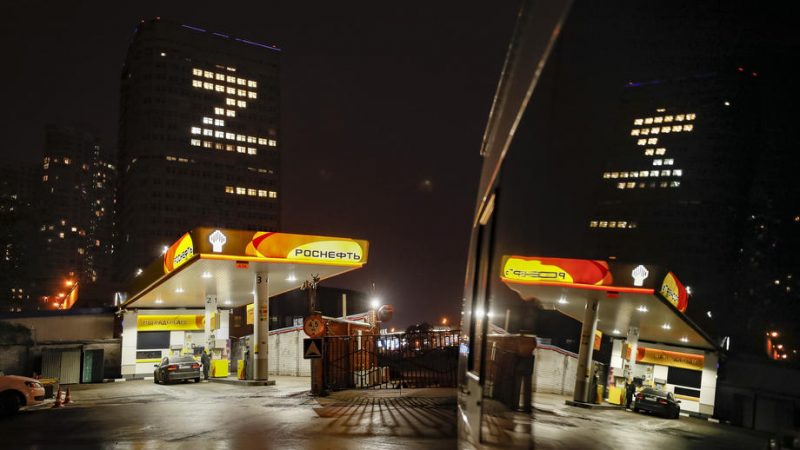 Rosneft gas station in front of the Gazprom building with windows glow in the shape of the symbol Z in Moscow, Russia, 31 May 2022. [EPA-EFE/YURI KOCHETKOV]

Benchmark European and British gas prices are on course for gains of more than 50% this week after Russia said capacity of its Nord Stream 1 pipeline, which take gas directly to Germany, would be cut by around 60%, dramatically reducing European gas supply.

Russian gas flows to Europe fell short of demand again on Friday (17 June), coinciding with an early heat wave gripping its south and boosting benchmark prices on concerns the continent may struggle to build up storage ahead of the winter season as planned.

Italy and Slovakia reported receiving less than half of the usual volumes through the Nordstream 1 pipeline, which crosses the Baltic Sea from Russia to Germany and accounts for around 40% of Russian pipeline flows to the European Union.

France reported it was receiving no Russian gas from Germany since 15 June.

Germany’s power industry group said on Friday lower volumes could now be replaced by other sources, such as Norway and the Netherlands, but the decline was “worrying” due to the potential impact it could have on supplies during the winter months.

Below are some of the factors explaining the impact of Russian supplies on Europe’s gas markets, even those that do not rely on Russian gas directly.

How much gas does Russia supply?

Europe has historically relied on Russia for around 40% of its natural gas, most delivered through pipelines including Yamal, which crosses Belarus and Poland to Germany, Nord Stream 1, which runs directly to Germany, and pipelines through Ukraine.

Not all countries get gas directly from Russia, but if countries such as Germany, Europe’s top buyer of Russian gas, receive less, they must fill the gap elsewhere, for instance Norway, which has a knock-on effect on available gas for other countries.

As a result, changes in Russian supplies can cause as much gas price volatility in Britain as the rest of Europe, even though Britain typically gets less than 4% of its gas from Russia. Lower Russian supply means less could be available from its largest supplier Norway.

What is happening now?

European gas prices soared in 2021, as supply failed to keep pace with demand driven by the recovery from the coronavirus pandemic.

Despite lower flows, Russian state-owned gas monopoly Gazprom said it was fulfilling all its long-term contracts, and European companies contacted by Reuters last year confirmed contractual obligations had been met.

That changed after Russia’s invasion of Ukraine, an action Moscow called a “special operation.”

This year Moscow has already cut gas flows to Bulgaria, Poland, Finland, Danish supplier Orsted, Dutch firm Gasterra and Shell for its German contracts, after they all rejected a Kremlin demand to switch to payments in roubles – a move in response to European sanctions.

Several companies such as Germany’s Uniper and RWE and Italy’s Eni made payments under Russia’s new scheme and continued to receive gas.

But many companies, including Uniper and RWE have now seen their supply curbed after Russia cut the capacity of the Nord Stream 1 pipeline.

While Italian Prime Minister Mario Draghi accused Moscow of using its gas supplies for political reasons, Russia said supply reductions were necessary because of the delayed return of equipment that had been sent for repair.

Gas flows from Russia through the three main pipelines have plummeted 26% in June compared with May to an average of around 1,771 gigawatt hours a day (GWh/d), Refinitiv Eikon data showed.

What about the alternatives?

The European Union aims to end reliance on Russian fossil fuels by 2027 and has begun looking for alternatives, such as by increasing imports of global liquefied natural gas (LNG).

But Europe has limited capacity to receive LNG and supply concerns deepened further after Freeport LNG, operator of a major US export plants, said on Tuesday it would take at least 90 days to resume partial operations after an explosion last week.