Facebook blocked in Tripoli and other cities as fighting rage 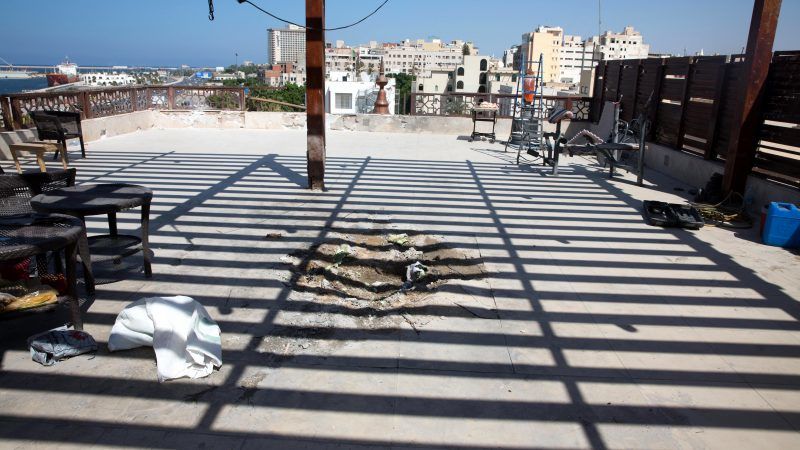 A view of damage on the rooftop of Al-Waddan Hotel after rockets fired by unknown militants fell over Tripoli, Libya, 1 September 2018. According to reports, rockets hit several parts of Tripoli on 1 September including the Al-Waddan Hotel, which is only 100 meters away from the Italian embassy, and Ben Ashour area near prime minister?s office as fighting renewed between rival factions in the capital. At least 39 people, including civilians, were killed in the fresh clashes that erupted over the past few days. [Stringer/EPA/EFE]

Facebook has been blocked in the Libyan capital of Tripoli and other cities, residents said on Monday (3 September) as fighting between rival groups raged.

Facebook is the main platform for news in Libya with officials, ministries and armed groups that effectively control the country posting statements there.

Tripoli has been shaken by more than a week of clashes between rival groups, the latest episode of chaos in the North African country since the toppling of Muammar Gaddafi in 2011.

The oil-producing nation splintered following the 2011 NATO-backed revolt that toppled Muammar Gaddafi, and since 2014 has been divided between competing political and military groups based in Tripoli and the east.

There was no clear response from officials over who was behind the blockage. Non-Facebook websites could be accessed, residents said.

Libyan utility LPTIC, which owns the two state telecoms firms, said in a statement that a lack of security had led to outages. Maintenance engineers were unable to reach some stations which had stopped working due to a lack of power.

Access to the web is controlled by state firms and monitored by security bodies which are effectively controlled by armed groups working with the powerless UN-backed government in Tripoli.

Newspapers play no role in Libya and independent national media based inside the country scarcely exists as journalists often face threats from armed groups or officials unhappy with critical coverage.

Some 400 prisoners escaped from a jail in Libya’s capital on Sunday while fighting between rival armed groups raged nearby, a judiciary official said as the United Nations called for the warring parties to meet on Tuesday.

Around 400 prisoners have escaped from a prison in the Libyan capital of Tripoli https://t.co/hQILy4uLph

The inmates forced open the doors of the Ain Zara prison and guards were unable to stop them, the official said, confirming a judiciary police statement posted on social media.

He asked not to get identified and could not provide more details.

The prison is located in southern Tripoli, an area hit for one week by heavy fighting between rival groups.

The Tawergha were forced to leave their settlement near the western city of Misrata in the NATO-backed uprising that toppled Muammar Gaddafi in 2011 and have been prevented from going back since.

Ergeha, who is a Tawergha, also posted online a video of firefighters extinguishing a blaze and showing severe damage to steel-made containers in the camp.

A rocket also hit the Waddan hotel in central Tripoli near the Italian Embassy on Saturday. Three people were injured, staff said.

State oil firm NOC confirmed one of its diesel depots used to supply a power station had been hit by a rocket on Saturday.

Fierce clashes erupted last week between the Seventh Brigade, or Kaniyat, from Tarhouna, a town 65 km (40 miles) southeast of Tripoli, against the Tripoli Revolutionaries’ Brigades (TRB) and the Nawasi, two of the capital’s largest armed groups.

The UN-backed government based in Tripoli declared a state of emergency in the capital “given the seriousness of the current situation.”

Although the government is formally in charge, it does not control the capital where armed groups are allied to it but operate with autonomy, often motivated by money and power.

To end the fighting the UN mission in Libya called on the “various concerned parties” to meet on Tuesday noon for an “urgent dialogue on the security situation.”

“Violence will only bring more violence to the detriment of the Libyan people”, the spokesperson said, adding that there was no military solution to the crisis in Libya, but only a political one.

He said the EU supports the UN-led mediation process and the efforts by UN special envoy Ghassan Salamé to bring about a lasting solution to the crisis.

“The EU expects all legitimate Libyan actors to rally towards this goal, in the spirit of compromise and by putting the interest of the Libyan people first”, the spokesperson concluded.

Italian Senator Pier Ferdinando Casini was quoted as saying that the lack of progress “occurring in Libya during the current period is the product of European divisions”. He also reportedly said that “there are foreign forces behind the tensions in the capital Tripoli”, and that there were EU countries with “a dual position” toward the Libyan parties.

According to reports France is putting its bets on eastern-based commander Khalifa Haftar, while Italy is supporting Tripoli-based Prime Minister Fayez Serraj.