Ties between Ankara and Brussels have plunged to a nadir not seen since Turkey formally opened talks to join the bloc in 2005, a process which is now frozen.

And while Erdoğan speaks of turning “a new page”, the list of European grievances is long.

Most recently, Brussels began drawing up a list of sanctions over Turkey’s hunt for natural gas in the eastern Mediterranean, which triggered a naval standoff with Greece last year.

Erdoğan’s direct military interventions in the Syrian and Libyan conflicts raised hackles in Europe, while his vocal backing of Azerbaijan in the six-week Nagorno-Karabakh war upset Armenia’s allies across the West.

Erdoğan’s threats to send millions of Syrian and other refugees Turkey is hosting to Europe if the bloc fails to provide more funding are a constant menace.

And he has made the animosity personal by attacking French President Emmanuel Macron’s treatment of Muslims, which Europe counters by pointing to Turkey’s grim record on human rights. 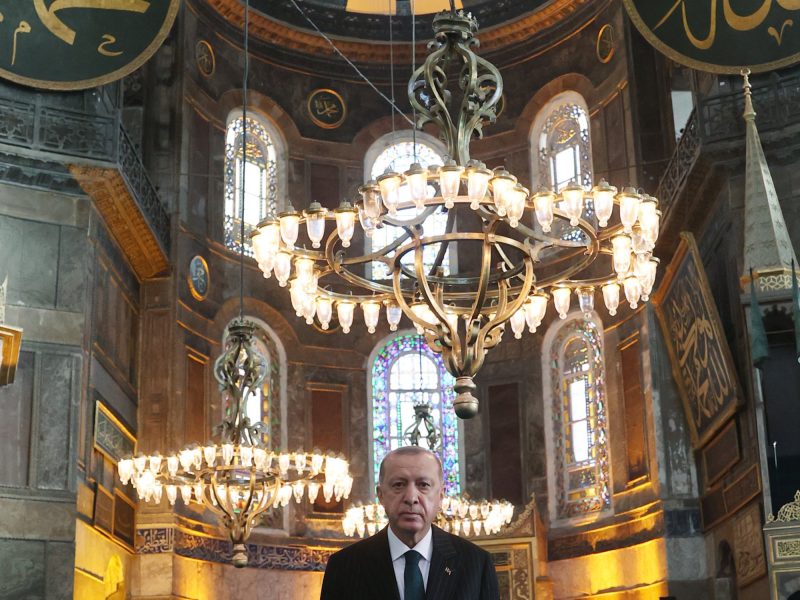 Some believe this standoff is unsustainable for Erdoğan.

“Ankara cannot afford an escalation with both the US and Europe, especially with an economy this fragile,” a European diplomat told AFP.

Turkey’s heavy dependence on Europe is borne out by the numbers.

EU member states accounted for 67.2% of foreign direct investments in Turkey between 2002-2018, according to official data.

With foreign sentiment dented, the Turkish lira lost a fifth of its value against the dollar last year, forcing the central bank to burn through most of its reserves trying to prop up the currency.

Then Erdoğan parted ways with his powerful son-in-law, who served as finance minister and bore the blame for Turkey’s economic woes.

“Erdoğan is looking for friends anywhere and everywhere,” said Ilke Toygur, an analyst at the German Institute for International and Security Affairs, and Elcano Royal Institute.

To this end, Erdoğan held a meeting on Tuesday with EU ambassadors — described as “positive” by some of those who took part — while Foreign Minister Mevlüt Çavuşoğlu will visit Brussels on Thursday.

Macron and Erdoğan have also exchanged letters that Çavuşoğlu said could help reboot their relations, leading to a possible video conference call.

US President-elect Joe Biden’s victory over Donald Trump, who once called the Turkish leader a “good friend”, appears to be at least partially responsible for Erdoğan’s shift in tone.

“Biden’s victory has reshuffled the cards. Turkey expects the next US administration will be less inclined to let it off the hook,” the European diplomat said.

Certain appointments by Biden are likely to raise hairs in Ankara, none more so than Brett McGurk’s naming to the National Security Council, where he will oversee the Middle East and Africa.

McGurk has been an outspoken critic of Turkey’s policy on Syria, where the US supports a Kurdish militia that Ankara blames for attacks on its soil, and will play an important role in shaping Washington’s relations with Erdoğan.

“This seeming call for a rapprochement with the EU can be interpreted as preparation” for Biden, said Sinem Adar, an associate at the Centre for Applied Turkey Studies in Berlin.

Erdoğan was once part of a select group of leaders who could dial up Trump directly on the phone, but Adar said the loss of this privilege with Biden is not the only factor behind the attempted rapprochement.

He faces “mounting domestic pressure due to economic woes accentuated by Covid-19” and a “decreasing vote share” for his ruling party and its nationalist junior partners, Adar said.

Erdoğan could demonstrate his goodwill by easing the pressure on his political opponents, some of whom are facing high-profile trials.

“For any signal from Ankara to mend relations with the EU to be perceived credible by the union, Ankara is expected to shift gears” on the rule of law and human rights as well as Turkey’s confrontational foreign policy, Adar told AFP.

Analyst Toygur said she did not think any specific action could provide a “demonstration of goodwill” from Erdoğan.

But she said the sides could find points of contact on managing illegal migration, since it is “an issue of utmost importance for the stability of the EU”.

Ankara is also hoping to update the sides’ Customs Union, although Toygur said the bloc was likely to be “more demanding” on this front.

But while Europe wants to avoid further strains with Turkey, Western diplomats point to a low appetite for a rapprochement in some EU corners.